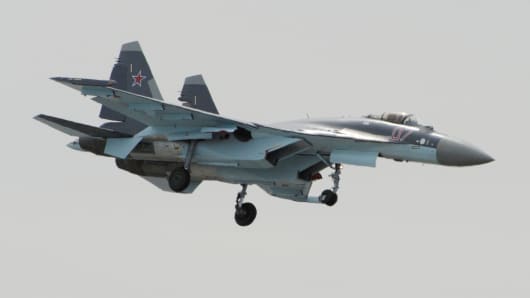 So how was your Black Friday? Did you camp out at the mall overnight and pick up any outrageous and unexpected deals? Or are you the type who likes shopping online and clicking on popup ads or special emails announcing exciting offers?

Either way, you're probably not having as great a holiday shopping season as China this year. And that's all because it sure seems like Beijing just picked up the deal of the century. That would be China's $2 billion purchase from Russia of 24 Sukhoi SU-35 jet fighters, made public late last month. No, the $83.3 million-per-jet price was not technically a bargain but the fact that they were for sale at all is the big news. The SU-35 is just about the most cutting edge fighter jet the Russians make, and Russia and the rest of the world don't usually sell the newest jets and weapons to China out of fears the Chinese will copy the technology and make and sell their pirated versions in short order. To put it simply, the Russians broke tradition with this sale and much of the world is asking why.

There are two top contenders for the title of "best answer," and most defense and political analysts believe the reason is some combination of the two. One explanation is that Russian President Vladimir Putin has damaged Russian relations with NATO and all the Western nations so badly that he needs to create better ties with China in the East. And if speeding up the usual wait time before selling Moscow's latest and greatest weapons and other technology is the cost, so be it. This strategy makes sense on a lot of levels but it's also a bit dicey since Russia's top arms customer is still India and India is China's longtime antagonist in the region. New alliance building is never easy.

The second biggest answer out there is the simplest: it's about the money. With the price of oil at historic lows for about 15 months now, all the world's biggest crude producers like Russia are feeling the pain. Throw in the rising costs of the Russian entanglements in Syria and Ukraine, and you've got even more pressures for Putin and company to get some more cash. Russia is one of the few big oil producing nations that actually has something else valuable to export and now its really exporting it.

Asia isn't the only big marketplace right now. Spurred by the West's nuclear deal with Iran, several Gulf states have been buying up Russian gear lately with help from the Saudis who are often acting as the financing arm in the acquisitions. The next question is what other nations will start lining up if Putin really starts opening up the store. That decision could be forced by other factors that include continuing oil price pain or a colder than usual Russian winter.

But the clearest message the world is getting is that if Putin is willing to sell his prized SU-35's to the Chinese, there probably isn't a very long list of other nations that he wouldn't sell to. And that may be the biggest reason for this sale after all.