Low oil prices don't cut into US production by much 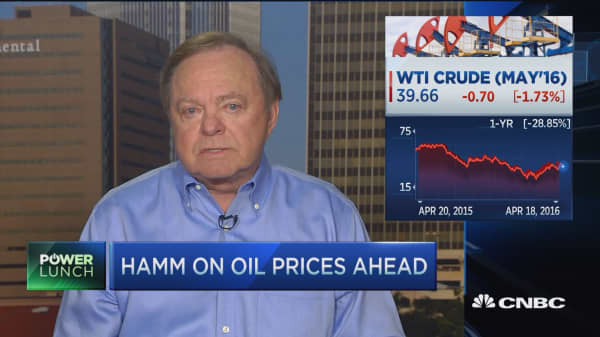 It's called the law of supply and demand.

When a commodity costs more to produce than the current market price, producers usually stop producing it. But when it comes to U.S. crude, a global crash in prices hasn't been matched by deep cuts in production.

The biggest impact so far has been felt on investment in new wells, as U.S. producers big and small have slashed capital spending and sidelined drilling rigs. As of this month, about 350 rigs were drilling for oil in the U.S. — about a quarter of the peak in October 2014. 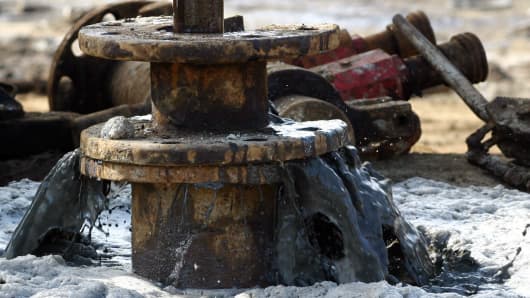 That pullback has brought economic pain to much of a U.S. oil industry that saw big gains in jobs and wages during a production surge that began in 2012. But while investment in new production has dried up, oil continues to flow from the wells that have already been drilled.

Overall output has fallen by about 6 percent since peaking a year ago, but many producers have opted to keep on pumping, even as prices remain stuck at around $40 a barrel — less than half the peak of mid-2014.

In the past, when rising surpluses pushed crude prices lower, major producers like Saudi Arabia cut back output to tighten supplies, boosting prices. But as American and Canadian producers have expanded production, Middle East producers continued to pump, hoping the crash in prices would push higher-cost North American producers out of business.

With North American production holding up, that strategy backfired. Many oil-producing nations have pushed for an output freeze, but after meeting this weekend in the Qatari capital of Doha, 18 exporting nations, including non-OPEC member Russia, were unable to agree to a deal to stabilize output at January levels.

Most U.S. producers seem equally uninterested in cutting production. Oil industry analysts say there are several reasons the decision to stop pumping when prices fall is not as straightforward as it may seem.

For starters, the cost of producing a barrel of oil varies widely from one well to another, based on the initial cost of finding and developing the oilfield, along with the costs of borrowing, operations and maintenance.

Some of the recent expansion of U.S. crude production, for example, has come from so-called "stripper" wells — once abandoned sites that are seeing new life thanks to advanced production techniques. Many of these are profitable even at current market prices.

But at $40 a barrel, roughly 2 million barrels a day of current global crude output costs more to pull out of the ground than it's worth, according to an analysis of global oil production by Wood Mackenzie, a commodities market research firm. 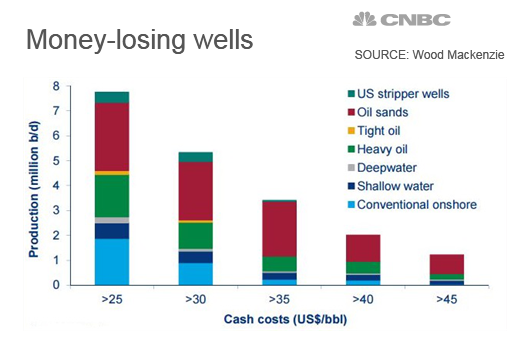 Why do those producers keep pumping? For some producers, the high cost of stopping and restarting has spurred them to keep producing and put the surplus in storage, in the hope that prices will rise again.

As a result, the world's storage facilities are awash in oil. In the U.S., stocks of crude and petroleum products are up 20 percent since prices peaked and are well above five-year highs. 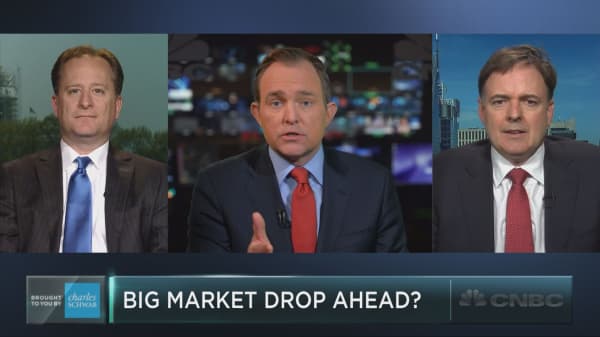 At the same time that production continues to grow, global consumption is softening — in part due to an economic slowdown in China and throughout much of the developing world.

Until the outlook becomes clearer, a few producers have decided to stop pumping. The biggest cuts have come from high-cost oil sands and onshore fields in Canada, older U.S. onshore projects and aging U.K. North Sea fields, according to Wood Mackenzie.

Worldwide, production continues to rise. Aside from increased Saudi production, OPEC's second biggest producer, Iraq, has been boosting output and Iranian exports are coming back on line now that sanctions against that country have ended.