If you’re an investor who’s also fashionable and fabulous, Michael Kors may have something that fits you like a glove.

Known for his stylish sportswear with ultra-luxurious touches, the famed designer is going public – with stock in his company.

After the close on Wednesday, Michael Kors IPO'd issuing 47.2 million shares at $20 with Morgan Stanley, JPMorgan Chase and Goldman Sachs leading the offering. Shares will trade Thursday on the New York Stock Exchange under the ticker KORS. 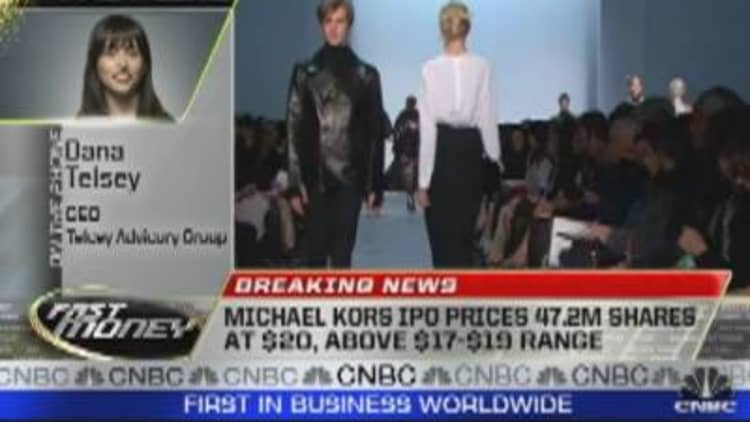 Considering other high profile IPOs such as GM and LinkedIn popped initially only to later pull back, you may be inclined to wait. However, Kors could be different – he’s an A-list celebrity whose designs are feted by fashionistas.

Should you pick something up for yourself now or wait for a sale?

Trader Karen Finerman thinks $20 is cheap. “This is an exciting story,” she says. “I’m a buyer. Yes, it’s expensive on current earnings, but this a growth story. I’d think it would be a high teens multiple. I’m looking for the stock to trade up to the mid-to high $20’s.”

She tells us there hasn’t been a company in the retail sector which has this kind of growth potential, in quite some time. “Awareness of Michael Kors came in 2004, so it’s still very new,” she says. (Kors is one of the judges on the popular TV show Project Runway which debuted that year.)

Dana Telsey
Neither Dana Telsey, Telsey Advisory Group LLC (TAG), nor any of its employees have holdings in Michael Kors.

TAG, currently and during the previous year, has not had Michael Kors as an investment banking client. TAG may seek such a relationship in the future (the next three months). TAG has not received other fees for services from Michael Kors.

TAG, its employees, Dana Telsey and her household have no other conflicts of interest.

Neither Dana Telsey nor TAG (including its affiliates) is, either now or at any time in the past twelve months, a party to any action or proceeding by or before, or under investigation with, any federal or state governmental body or authority, or any non-governmental regulatory body or authority, or subject to any action or proceeding before any state or federal court involving allegations of criminal conduct or fraud.

Peter Misek
Jefferies & Company, Inc makes a market in the securities or ADRs of Research in Motion, Inc.