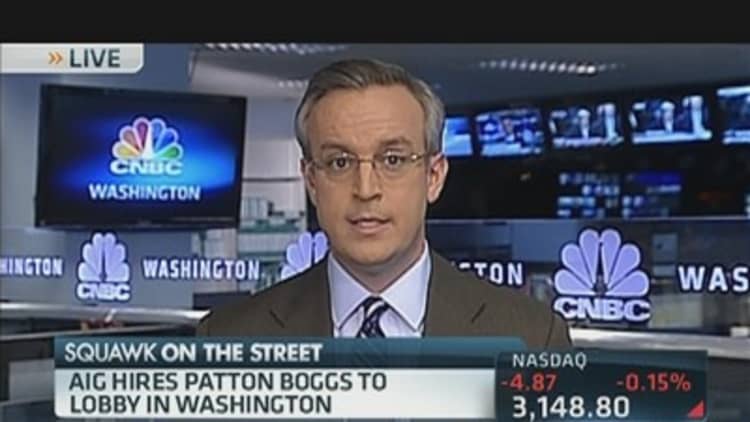 watch now
VIDEO1:2501:25
AIG Back in the Lobbying Game
Squawk on the Street

AIG is back in the lobbying game after a four-year self-imposed ban from lobbying while the company was owned by U.S. taxpayers.

The firm said back in 2008 that it would stop lobbying after it came under pressure from Capitol Hill in the wake of its federal bailout. (Read More: For US, Sale of AIG Stock Closes a Chapter on Bailout.)

In documents filed with the U.S. Senate, the lobbying firm Patton Boggs, home of well-known lobbyist Tommy Boggs, said it would be paid a $120,000 retainer to lobby on Capitol Hill on behalf of AIG. Specifically, the firm said, it will lobby on the proposed sale of AIG's stake in the International Lease Finance Corporation, a commercial jet company that is a wholly owned subsidiary of AIG. (Read More: AIG to Sell ILFC to Chinese Group for Up to $4.8 Billion.)

News of that proposed sale first leaked publicly in December. The insurance giant plans to sell most of ILFC to a group of Chinese investors in a deal worth more than $4 billion. The deal was expected to face regulatory review by Committee on Foreign Investment in the United States, or CFIUS, which scrutinizes foreign asset sales for U.S. security implications. Patton Boggs is expected to be able to help explain the deal terms to U.S. regulators.

In a statement to CNBC, AIG painted the lobbying hire as one more piece of its continuing outreach efforts in Washington.

"AIG has provided information about the company to government officials on an ongoing basis, and the reported activity is an extension of those efforts," the statement said.

"Companies don't want to stay in the political wilderness any longer than they have to," said Michael Beckel of the Center for Public Integrity. "Now that AIG has regained a foothold, they are going to be back in a big way."

Documents indicate that AIG began lobbying several days before the taxpayers were fully reimbursed for their investment. The effective date of the lobbying registration was listed as Dec. 7. Treasury announced that it would sell all of its remaining holdings in AIG three days later, on Dec. 10.