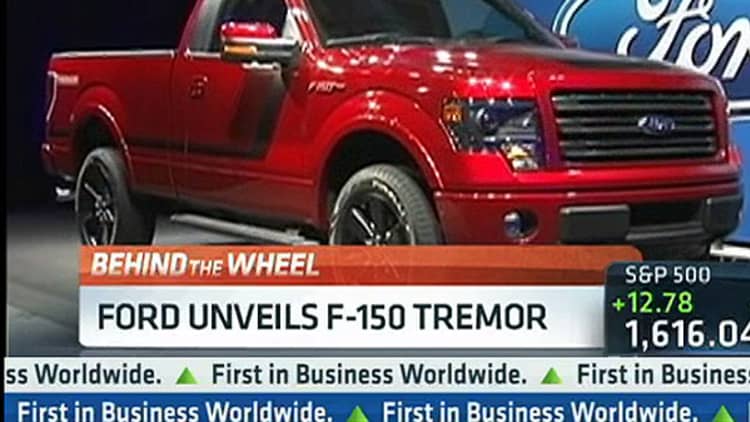 Hoping to take advantage of a booming pickup market, Ford is rolling out a new version of its popular F-Series truck. The Ford F-150 Tremor is a regular cab pickup with a short wheel base that will feature a smaller but more powerful engine as the company pushes fuel efficiency in trucks.

"This truck is all about introducing another derivative to our truck buyers. A smaller wheel base, regular-cab version with an EcoBoost engine providing performance and a little bit of fun," said Joe Hinrichs, president of Ford of the Americas.

The Tremor will roll into showrooms this fall. Officially, Ford is not giving pricing, but those familiar with the plans say the Tremor is likely to have a sticker price between $23,000 and $27,000.

The pickup will come with a 3.5-liter EcoBoost engine, essentially giving drivers the performance of an 8-cylinder engine in a smaller, more fuel-efficient engine. Ford has found better mileage is driving more truck owners to replace their existing pickups.

"The fuel economy you get today compared to the one that is 11 years old, the business equation says you should buy one now," said Hinrichs.

More than 40 percent of the F-Series trucks that Ford sells are now coming with EcoBoost engines.

Better mileage will also be an area of marketing battles between Ford and its chief rivals in pickups. Both General Motors and Chrysler have new pickups headed to showrooms in the months to come, and both automakers will tout better fuel efficiency for their trucks.

The combination of greater demand for trucks and Ford's lead in full-size pickups is helping the automaker post record profit margins in North America. Several analysts estimate Ford makes an average profit of $10,000 on every F-Series truck it sells. A lot of that is driven by Ford selling a more high-end F-Series with more luxury features.

In many ways, Ford, GM and Chrysler are in the sweet spot of the market with pent-up demand for new trucks and a recovery in the housing market driving sales and allowing the automakers from having to raise incentives on pickups.

(Read More: Chevy Gets in Luxury Pickup Race With Silverado)

"We're seeing very strong demand which is helping keep prices in a good spot for the market," said Hinrichs.