Although there's no official time when an investor should rebalance or reposition their portfolio, many advisors are devoting considerable energy in the last quarter of 2013 to assess the risk tolerance of their clients as they evaluate a portfolio's asset allocation.

"It is a lot easier to talk about fixing the roof on a sunny day than in the middle of a storm," said Mark Cortazzo, a senior partner with Macro Consulting Group.

This time last year, financial advisors had their work cut out for them. Many were scrambling to come up with strategies to handle looming tax-related challenges—from the prospect of a big decrease in the estate tax exemption to the threat of higher taxes on dividends and capital gains.

As 2013 draws to a close, there may be far fewer moving parts when it comes to taxes, but each year brings a unique set of challenges and windfalls that shape investment decisions in the near term.

Among other hot-button issues is uncertainty over the direction of interest rates that is weighing heavily on the minds of advisors as they reposition the portfolios of their clients during the final months of this year. 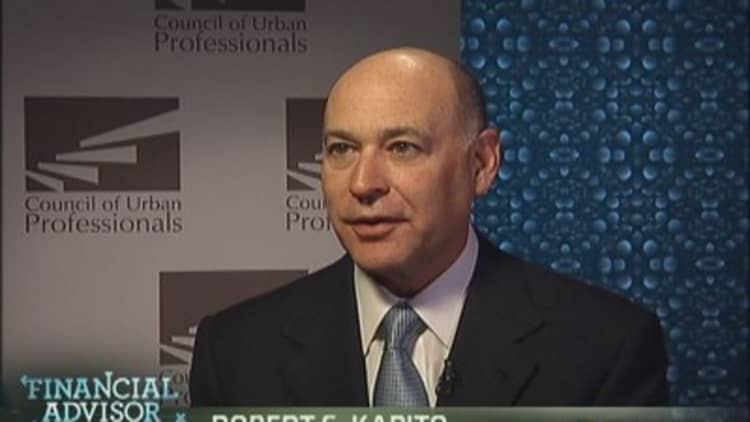 After the financial crisis, skittish investors flocked to the perceived safety of bonds, despite incredibly low interest rates stemming from the Federal Reserve's aggressive monetary measures to stimulate the economy.

The Pimco Total Return Fund, one of the world's largest bond funds, saw its assets decline by about 12 percent year-to-date through August as a result of losses and investor redemptions, according to Morningstar, an investment research firm.

Financial advisors say that many individual investors—particularly the large numbers of older, income-oriented Americans heavily invested in bonds—are in for a rude awakening if rates continue to rise. With the exception of a few short-term spikes, interest rates have generally declined during the past 30 years, lulling many investors into a false sense of security, advisors say.

"Consumers have never experienced a sustained rising-rate environment, and they generally don't realize what happens to bond prices in that kind of environment," said Ric Edelman, chief executive officer of Edelman Financial Services.

Not all advisors, however, are alarmed at the prospect of somewhat higher interest rates.

In recent years, the low-rate environment has helped to spur economic growth and created a wave of mortgage refinances. However, retirees and other conservative investors have been turned off by paltry yields on CDs as well as Treasurys and corporate bonds, said Barry Glassman, president of Glassman Wealth Services.

"If the rate on Treasurys and corporate bonds were to climb to 4 or 5 percent, many retired people would love this," Glassman said. "That might, in fact, save many retirement plans."

Still, many advisors are taking steps to minimize risk on the fixed income side of existing portfolios by reducing exposure to long-term bonds in favor of those with shorter maturities and/or higher credit quality.

Other advisors are seeking to hedge portfolios against rising interest rates by shifting money from fixed-rate holdings into floating-rate notes with yields tied to benchmarks.

"On the fixed income side, we have dialed down maturities and dialed up credit quality," Cortazzo said. "We are buying shorter-maturity bonds and increasing exposure to high-quality bonds in that space in order to reduce credit risk."

Fearing that other municipalities could follow in the footsteps of bankrupt Detroit, advisors are also becoming much more selective when it comes to municipal bonds, long perceived by investors as one of the safest types of bonds.

To that end, some are pulling their clients out of municipal bonds entirely or hiring firms that specialize in evaluating the credit quality of municipalities to help narrow choices.

"Until we start seeing some real economic growth coming from all over the country, we have a municipal bond concern on the horizon," said Sheryl Garrett, founder of the Garrett Planning Network.

Despite the U.S. market's strong performance this year, many advisors continue to preach the virtues of global diversification, although they admit it is a tough sell given the weak performance of emerging markets lately and lingering economic woes in Europe.

Some advisors who pulled their clients out of emerging markets just a few years ago are eyeing the relative bargains, from a price-to-earnings standpoint, to be had there now.

Meanwhile, some worry about the potential for greater stock market volatility in the coming year, particularly if the Federal Reserve begins to wind down its stimulus program. Despite the tepid pace of the U.S. economic recovery, the Standard & Poor's 500 index gained nearly 12 percent this year, through the third quarter.

Given the market's bull run, some investors have been quick to forget the stock market losses they suffered only five years ago in the market meltdown, say some advisors.

Which means advisors will be working closely with clients to again assess their risk tolerance as they reposition portfolios.

—By Anna Robaton, Special to CNBC.com.