Shutdown is nothing: Debt ceiling debacle could be real ugly 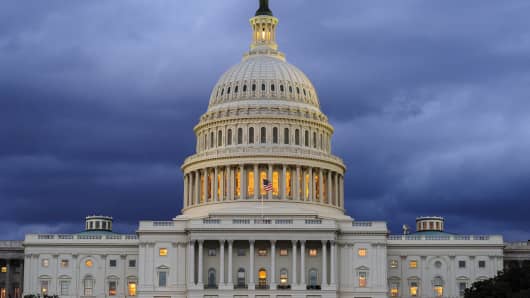 Tuesday's government shutdown could be just the warm-up act.

The failure by Congress on Monday to renew the federal budget into a new fiscal year is expected to be followed in a few weeks—no one knows exactly when—by an even more dangerous stalemate over raising the government's borrowing authority.

"You can only see an endgame that ends with one side or the other blinking, and it's hard to predict who that will be," Tony Fratto, a Washington consultant and former Treasury official, told CNBC. "They may not blink until after government has taken a day or two of not paying some bills—which some would consider a technical default." 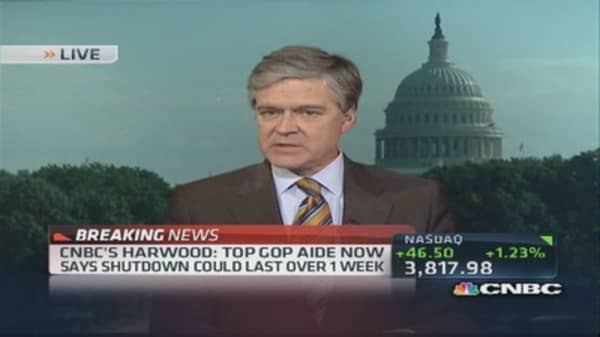 Such a default could wreak much deeper havoc than the ongoing government shutdown.

Though disruptive and costly, the current budget freeze is expected to have limited impact on the economy and financial markets, which so far have largely shrugged off Washington's fiscal follies.

While hundreds of thousands of government workers have been sent home, much of the government is operating under spending rules that allow most agencies to keep functioning. That's why the last 17 such shutdowns have caused little long-term damage.

If the government exhausts its legal authority to borrow, however, the Treasury says it will be forced to shut off all cash payments.

That's why last week's political stalemate over the federal budget—embarrassing, pointless, infuriating, to be sure—is a shaping up as mild annoyance compared to the potential mayhem looming if Congress forces the Treasury to default on its payments.

Until Monday, many observers expected Congress and the White House to reach some sort of compromise before the budget deadline. Now, many are reconsidering the outlook for averting a debt ceiling debacle.

"The shutdown doesn't bode well for the debt ceiling negotiation," said Paul Ashworth, chief U.S. economist at Capital Economics. "While the House Republican leadership is sort of willing to go along and have this partial shutdown, a debt ceiling standoff is much more dangerous. "

The nation's borrowing limit currently stands at about $16.7 trillion. Unlike virtually every other country in the developed worked—that cap has to be extended periodically by a special act of Congress. Though often contentious, the once-routine debt ceiling extension has recently become a political weapon of mass destruction.

Congress came close to forcing a Treasury default in July 2011, pulling back from the brink at the last minute and agreeing to a compromise. The spectacle cost the U.S. its Triple-A credit rating, but no payments were missed. Now, with Congress still dug in over a bitter fight to delay the White House's health care reform law, there's little time left to avert a freeze on government borrowing.

Unlike the hard deadline of the new fiscal year that began Tuesday, the debt ceiling deadline is more complex and dangerous because it's not clear just when it will be reached. The Treasury has been deferring some payments and tapping reserves, but last week estimated that it will exhaust those "extraordinary measures" in less than three weeks.

The forecast is complicated by the complexities of government spending and receipts, which don't flow in a steady stream week-in, week-out like a household paying regular monthly bills with a fixed weekly paycheck.

With some 80 million payments moving through the system each month, the government's revenues and expenses ebb and flow with irregular, sometimes unpredictable, peaks and troughs on both the income and payment sides of the ledger. Social Security checks typically go out at the beginning of the month, for example. Quarterly tax receipts, on the other hand, typically cluster around the middle of the month. 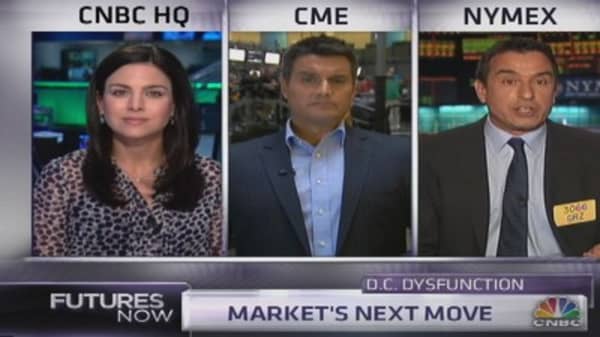 Treasury figures it will have just $30 billion left on hand by Oct 17—most likely not enough to cover all government spending that day. On a typical day, the government's bills reach $60 billion. The department faces an even bigger wild card every Thursday, when it rolls over about $100 billion in U.S. debt. If bond holders decided they wanted to be repaid rather to rolling over that paper, the Treasury would be on the hook for those redemptions.

Federal spending would fall by roughly 20 percent almost overnight. That's about about 4 percent of gross domestic product in an economy struggling to expand by 2 percent a year. A protracted borrowing freeze would quickly tip the economy back into recession.

A borrowing freeze would also force the suspension of interest payments on the national debt for the first time in the country's history.

Such a default would have unpredictable—and potentially dire—consequences. At the very least, interest rates would likely rise to offset the risk of holding Treasuries. The ripple effects—even more difficult to predict—could spark a global credit freeze no unlike the failure of Lehman Brothers in Sept. 2008.

(Read more: Lehman a 'kindergarten show' next to any default)

Some default skeptics have argued that such an outcome is highly unlikely because the Treasury would still have enough cash coming in to pay interest on the national debt.

Even with a borrowing freeze, cash would continue to flow into the Treasury's account from tax receipts and other payments due the government. Moody's points out that interest on the debt makes up just 7 percent federal spending, leaving plenty of money left over to pay interest to bond investors.

"We believe that the government would continue to pay interest on Treasury securities," wrote Moody's analysts last week. "However, the government would have to make painful choices as to which expenditure to cut, and there is no historic precedent that provides confidence that interest payments would be prioritized over discretionary spending."

The Treasury has said it has no legal authority to decide which bills to pay and which to ignore. It's also not clear whether its payment system could be rejiggered to prioritize some payments over others.

In any case, failing to make any federal obligations would raise lasting questions about the U.S. government's "full faith and credit."

"Any plan to prioritize some payments over others is simply default by another name," Treasury Secretary Jack Lew warned in a letter to lawmakers last week said Lew.

Some default deniers also argue that President Obama has the power to override Congress and authorize the Treasury to continue borrowing, based on language in the 14th Amendment ("The validity of the public debt of the United States.. shall not be questioned.")

"Raising the debt limit is Congress's responsibility because Congress, and Congress alone, is empowered to set the maximum amount the government can borrow to meet its financial obligations," he told the Economic Club of Washington, D.C.