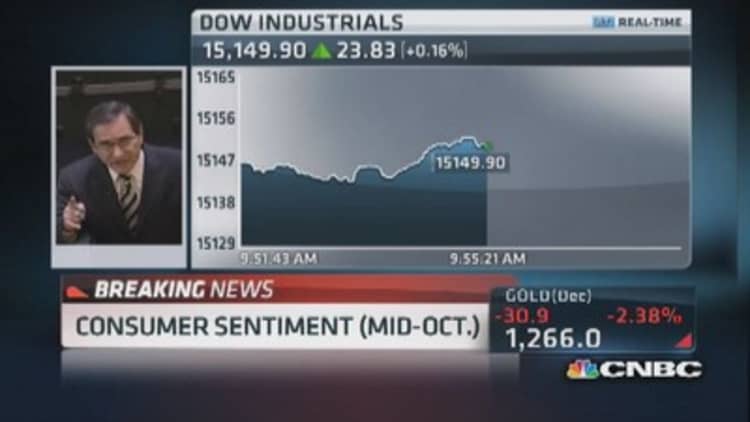 U.S. consumer sentiment deteriorated in October to its weakest level in nine months as the first federal government shutdown in 17 years undermined Americans' outlook on the economy, a survey released on Friday showed.

The Thomson Reuters/University of Michigan's preliminary reading on the overall index on consumer sentiment fell to 75.2 in October, down from 77.5 in September. This was the lowest figure since January.

An employee arranges racks of jackets at the House Of Hoops by Foot Locker retail store at the Beverly Center in Los Angeles, California.
Patirck T. Fallon | Bloomberg | Getty Images

The early October reading fell short of the 76.0 forecast by economists recently polled by Reuters.

While the sentiment gauge declined for a third straight month, the size of the decrease was relatively small, as worries about a protracted shutdown were mitigated by some optimism about income and inflation, survey director Richard Curtin said.

"Consumer confidence posted a surprisingly small decline in early October despite widespread awareness of the government shutdown,'' Curtin said in a statement. "The muted response may be due to consumers giving progressively less credence to the economic scare tactics that have framed the debates over the past few years,'' he said.

There were few signs that President Barack Obama and top Republican lawmakers were close to an agreement to reopen the government and to increase the $16.7 trillion debt ceiling, which is expected to be exhausted on Oct. 17.

"To be sure, this can quickly change if the impasse continues,'' Curtin said of a possible further deterioration in consumer sentiment.

For now, the negative developments in Washington has hurt consumers' outlook rather than their current assessment on the economy and their own finances. The survey's gauge of consumer expectations fell to 63.9, the lowest level so far this year.