Several U.S. institutional investors said they are closely monitoring the developments at Pimco, the world's largest bond firm, in the wake of Mohamed El-Erian's abrupt resignation as CEO and ensuing acrimony between him and co-founder Bill Gross.

The investors, including retirement systems, have formally put Pimco on "watch lists," a signal that they will keep a much closer eye its performance than usual. It could eventually lead to reductions in the amount of money they allocate to funds at the firm, whose full name is Pacific Investment Management Co. and which has $1.91 trillion in assets.

"We intend to go out and meet with them over the course of the next month," said David Hunter, chief investment officer of the North Dakota State Investment Board. The board, which has about $400 million invested with Pimco, put the fund on its watch list on February 28.

(Read more: Pimco'sGross declares El-Erian is 'trying to undermine me')

Hunter said the board could ultimately decide not to make any changes to its allocation.

The California Public Employees' Retirement System, the largest U.S. pension fund, said it had not placed Pimco on a formal watch list, but it was also paying close attention to developments.

"CalPERS staff has tremendous respect for the staff at Pimco," the system said in an emailed statement. "That being said, we are monitoring the issue and will keep our board aware of the changes."

In a statement, Pimco CEO Douglas Hodge said: "We are focused on communication with our clients, and have been in regular contact with them following the recent leadership transition. They understand the changes we have taken and why, and are ready to move forward with us."

In a Tweet on Monday, Gross wrote, "No distractions here—just long term performance satisfaction—working hard as always for clients."

(Read more: Gross on Pimco: Better 'than we were before')

The closer scrutiny by state and local pension systems shows that Gross, though, may have more work to do to assuage investor concerns after El-Erian's surprise departure and reports of growing discord between the two men amid weak fund performance.

Overall, customers withdrew $41.1 billion from Pimco's flagship Total Return Fund last year, a record amount for the manager, according to investment research firm Morningstar. The fund posted another $1.6 billion in outflows in February, reducing assets to $236 billion and marking the 10th straight month of outflows.

The Total Return Fund, which Gross manages, trailed more than 70 percent of its peers in February.

Last month, a Wall Street Journal article described the worsening relationship between the two men as Pimco's performance deteriorated. Later, Gross told Reuters that El-Erian, who is due to leave the firm in less than a week, was trying to "undermine" him by talking to the Journal.

A memo from investment consultant NEPC to the City of Fresno Retirement System Joint Boards noted "an elevated level of concern" around the changes at Pimco.

During a recent on-site visit to the bond firm's offices, "it was clear that there was a profound sense of disappointment and surprise within Pimco regarding Mr. El-Erian's departure," the memo said, adding: "Mr. Gross viewed Mr. El-Erian as his successor and during the meeting he expressed a level of sadness and frustration regarding the resignation."

The Fresno systems were already weighing investing with Pimco when news of El-Erian's departure, as well as other staff changes, came out. When the city wanted reassurance on organizational questions, Pimco sent a team to the Fresno offices.

The Fresno systems are now negotiating with Pimco and expect to invest money with the firm in coming months.

"You're talking a lot of depth (of the bench). It's not driven by two people," said Stanley McDivitt, the systems' retirement administrator. 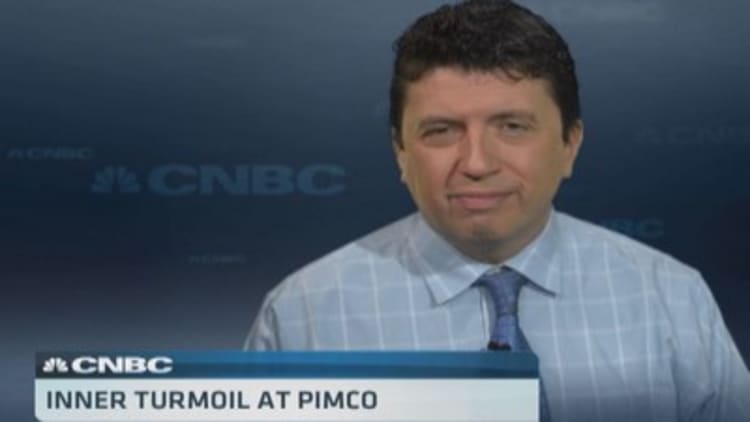 Other investors said they were not in a rush to make changes to their allocations to Pimco, which is owned by German financial services company Allianz SE.

The Florida State Board of Administration spokesman Dennis MacKee said it placed Pimco on its watch list as a routine procedure, which it followed for any firm that was undergoing management shifts.

The Florida board has about $1.7 billion in its pension fund at Pimco and about $240 million from its defined contribution plan with the firm.

"We think of our watch list as just enhanced oversight. You look a little deeper," MacKee said.

Neil Rue, a managing director at Pension Consulting Alliance, said it was too early to make any decisions about how these changes might affect Pimco's performance.

"On the fixed income front, we told our clients don't take any major action, but we need to watch this closely," Rue said.

If Pimco's style remains consistent, given Gross' strong track record over many years, there may be no changes recommended, Rue added.

R. T. Jones Capital Equities Management Inc Chief Investment Officer Steve Davis said his fund pulled out $100 million from Pimco Total Return Fund last year because of a desire to reduce duration exposure and interest rate risk, but he would consider returning to the bond giant in the future.

"Nor do we think the internal turmoil will negatively affect the performance of the fund. In fact, we don't rule out using the fund again in the future," Davis said. "We have very high respect for Bill Gross and his team at Pimco."