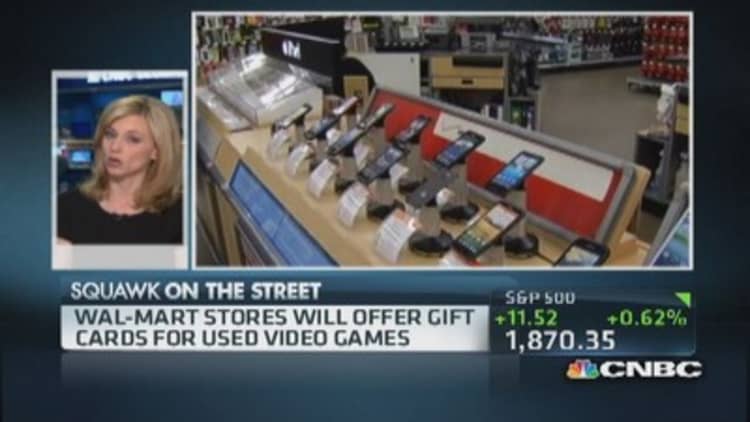 The competition for used video games is heating up as the world's largest retailer enters the arena starting next week.

Wal-Mart said Tuesday it would allow consumers to come into its stores, at 3,100 locations, and trade-in used video games for an eGift card for use on any item sold in Wal-Mart and Sam's Club stores and online.

Later this year, Wal-Mart will resell the pre-owned games in-store and online, after the games have been refurbished by CE Exchange. Wal-Mart currently works with CE Exchange on its smartphone and tablet trade-in programs.

Word of the new program sparked a selloff of GameStop shares, which tumbled 4 percent, as investors worried about the impact on the video game retailer.

GameStop is largest retailer of new and used video games, with two-thirds of its product offering used games. Pre-owned games are significant margin boosters for the gaming retailer, accounting for about half of its gross profit.

Wal-Mart's success in the used video-game market remains to be seen, but its entry is significant.

"For all the concern there's been about the used video-game model as digital and online video games take share, Wal-Mart getting in validates the business model," said Oppenheimer retail analyst Brian Nagel.

"We aren't participating in the $2 billion used gaming opportunity at all right now," said Duncan Mac Naughton, chief merchandising and marketing officer for Walmart U.S., during a conference call with reporters that announced the news.

According to NPD, video-game sales fell 17 percent during the most recent holiday season.

However, despite the decline, Wal-Mart said it still expects there was an inflection point in gaming with the new hardware that came out last fall, Mac Naughton said.

No doubt, Wal-Mart likely hopes the program will generate foot traffic, or help it capture a larger share of new-release game sales as those trade-in dollars are turned into sales.

But some observers said the bigger question may be the program's possible impact on competitors like GameStop, Best Buy, Amazon, eBay and others that currently offer trade-in programs.

That's because the business can be lucrative. While the industry saw video-game sales fall over the holiday season, GameStop reported a 7 percent increase in used game sales for the period.

(Read more: Wal-Mart ups the ante on its big bet to go small) 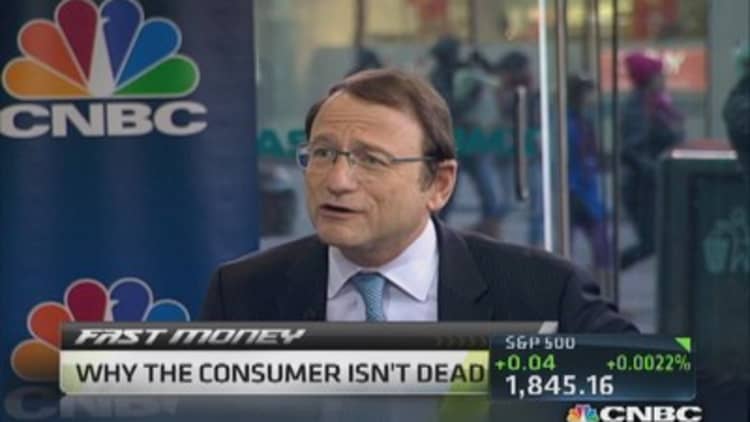 In a note to investors, BB&T Capital Markets analyst Anthony Chukumba said, "We do not believe Wal-Mart will have a material impact on GameStop's dominant used video-game market share and would use any weakness in the stock today as a buying opportunity."

Wal-Mart isn't shy about its entry into new markets and the potential fallout that may cause for rivals. In a press release announcing the new program, Mac Naughton refers to the retailer as a disruptor saying, "When we disrupt markets and compete, our customer wins. They'll save money on video games and have the flexibility to spend it however they want."

Nagel isn't so sure Wal-Mart can completely disrupt the market for used games. "Wal-Mart is incredibly good at what it does. But, to execute a buy, sell trade video-game program for a big retailer, like Wal-Mart, is notoriously difficult," he said.

Chukumba agrees, noting "many retailers have been unsuccessful in their past attempts to enter the used video-game market" including an earlier Wal-Mart test, Best Buy, Toys R Us and Blockbuster.

When asked if Wal-Mart had ever considered a trade-in program that gives consumers cash-back, Mac Naughton said he thinks a Wal-Mart gift card is pretty close to cash because shoppers could trade-in a used video game for a new game, or for anything from socks to a bike.

GameStop, Best Buy and Amazon all offer gift cards for video game trade-ins, and while eBay does offer cash, it charges various fees for the exchange.

(UPDATE: This story was updated to add GameStop market reaction as well as additional comments from analysts.)