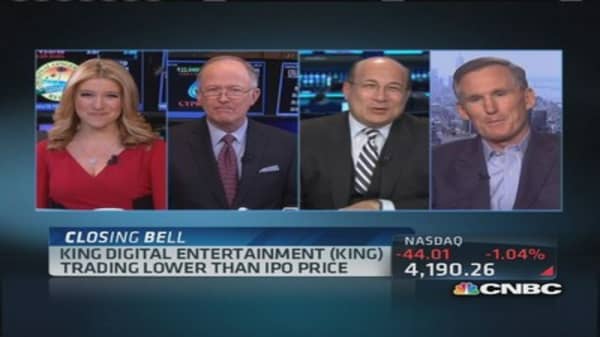 "Relax pal. First lesson in business is don't get emotional about stocks — it clouds your judgement." — Gordon Gecko from "Wall Street."

While I most certainly do not wish to imitate the infamous Gordon Gecko, he does have a point when it comes to stock-market investments. Not only do I refuse to get emotionally involved with stocks, I won't even go so far as to get a crush on one … especially a maker of Internet and mobile games, like King Digital Entertainment.

Granted, the maker of the "Candy Crush Saga" has plenty of smitten players, and investors, but to me, King Digital is just another fad stock, like Zynga, 4Kids Entertainment, or like fad products of the past … anyone remember Cabbage Patch Kids, Furbies, or even Beanie Babies? Now granted, Ty Warner became a billionaire selling Beanie Babies, but he, and his company, are the exception, not the rule. Fad stocks are highly exciting, enticing and dangerous. Now I wouldn't go out and short KING today, or tomorrow. But at the first hint of slowing user growth, I most certainly will be among those willing to crush that stock. And with good reason.

Let's go back a couple decades when another fad was in full flower.

During the height of the 1990s tech craze, 4Kids entertainment had sole licensing rights to Pokemon cards and content. The stock soared to unbelievable heights and lofty valuations. Every time I made cautious comments about the Pokemon craze on CNBC, critics jumped out at me, like the brightly animated characters in the Pokemon cartoons, and claimed I simply didn't understand what the craze was all about.

They argued that no kids would ever stop trading Pokemon cards, or skip an upcoming Pokemon movie. Well, 4Kids entertainment is a shadow of its former self, having gone bankrupt, pared its staff to a skeleton team of 12 people and struggled with reanimation.

And while Pokemon cards are still around, the kids who once traded them with reckless abandon are in their 20s, rather ironically, playing the Candy Crush Saga … for now.

Zynga, though still a viable company, is also struggling to get some zing back in its stock. There must be a lot of "angry birds" out there, who are a bit miffed that Zynga could not replicate that momentary success with another brief, but profitable, fly by.

Away from the gamers, and into the realm of theme restaurants: Anyone remember Rain Forest Cafe??? Neither do I. Check that tropical stock out. Good luck finding it in the jungle of failed fads.

Although this IS an emotional statement, I have to say it: I hate "fad stocks," be they digital game makers, theme restaurants, or pet rocks. They are like your dream date who turns out to be a dud. (There may be some of you reading this old enough to remember what game that line comes from!)

(Read more: Candy Crush? WhatsApp? Sure looks like a bubble)

There are some, including a few of my colleagues, who say that King Digital is different. It creates, not acquires, new games with a talented in-house team; it doesn't rely on Facebook, like Zynga did, for its distribution; it's valuation is cheap relative to other companies in the same space and its revenues and profits are growing nicely.

Wall Street is littered with hot stocks, and fads. For every Mattel and Hasbro, there are countless Colecos, 4Kids or Furbie Factories.

Like those failed fads, King Digital, thus far, has one thing going for it … Candy Crush. Seventy-eight percent of the company's money currently comes from the Candy Crush craze. For me to get sweet on this stock would require more proof that this stock is more worthy of a long-term relationship than a mere crush. And there are far too many examples of stock-market crushes that turn out, simply, to be one-night fads.

Ron Insana is a CNBC and MSNBC contributor and the author of four books on Wall Street. He also delivers a daily podcast, "Insana Insights," and a long-form weekly version, both available on iTunes and at roninsana.com. Follow him on Twitter @rinsana.