Ford's Mulally—a free agent with a ton of options 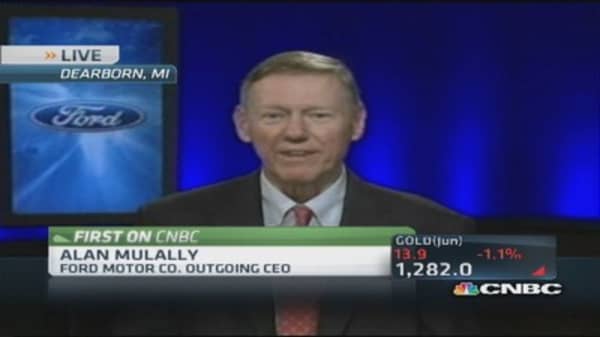 Oh, to be Alan Mulally. The outgoing Ford chief executive officer will soon be the ultimate free agent in the business world.

He's a highly successful CEO with an all-American image, and the confidence not to run scared from the challenge of fixing a Fortune 500 firm: Let the bidding begin.

Well, to be honest, it has already begun.

Although Mulally officially said that he has no plans for life beyond Ford, those close to him paint a far different picture.

Mulally is not fading away.

After eight years behind the wheel at Ford, Mulally will re-emerge in a high-profile position that feeds his desire to stay active, and put his talents to work.

My opinion, based on speaking with those close to Mulally, is that his options fall into three areas:

1. Become CEO of another company

Mulally still has the desire to run a company.

He's leaving Ford largely because he's climbed the mountain, and he realizes that the mark of a successful CEO is finishing the job and handling a smooth transition.

That said, Mulally's not going to move over to a small mom-and-pop operation.

If he takes another CEO job, it will be for a big company.

2. Join the board of a major company

This may not seem like a move with a lot of action, but Mulally would see it differently.

He views himself as the ultimate team player who can also lead a large organization.

If he were asked to become executive chairman of a major company, where he could help shape how the management team moves the firm forward, he'd take the offer.

Mulally has a desire for public service, and if the right opportunity came along, he'd take it.

The key here is making sure it's the right opportunity.

If you want to have some fun, log onto Twitter and see some of the suggestions people have for where Mulally should go next.

"The company that needs A Mulally's skills the most right now is $MCD McDonald's. Alan could revive that Great American brand," one user said.

Another person tweeted, "Depending on [the] performance of [CEO Jeff] Smisek over the next year, $UAL [United Continental] could become an interesting possibility."

But one thing is certain—Mulally's next act will be a visible one.

And who can blame him? He's the hot free agent for corporate America.