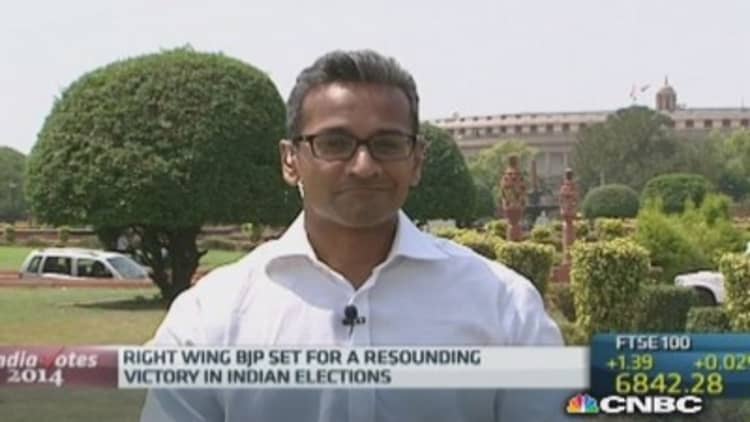 The alliance led by the Modi's Hindu nationalist BJP had already won or was winning 339 parliamentary seats, far more than the majority of 272 required to rule, Reuters reported. Even on its own, the BJP was ahead in 282 seats, giving Modi the most decisive mandate for an Indian prime minister in 30 years. A total of 543 seats are up for grabs in India's parliament.

"You have to remember that this is an opportunity, not a victory, to speak in one voice to move forward," said Shamika Ravi at the Brookings Institution in New Delhi.

"So everyone is hopeful that Modi can deliver the growth mandate that he has promised," she added.


A spokesman for the Congress party meanwhile conceded defeat, saying the nation has voted "against us," the Associated Press reported.

In Mumbai, India's stock index soared as much as 6 percent to a fresh record high as investors cheered the prospect of a Modi-win. It closed 0.9 percent higher. The rupee strengthened more than one percent to its highest level in almost 10 months at around 58.70 against the dollar.

"There is a likelihood that the BJP and its NDA (National Democratic Alliance) could get a super majority," Jahangir Aziz, head of emerging market Asia economic research at JP Morgan, told CNBC.

"If that happens, I think the market will heave a sigh of relief because that's what it has been pricing in over the last five days," he added.

Returns from the 989 counting centers came in thick and fast throughout the morning. Exit polls had already indicated a clear victory for the BJP and its allies but have not proved the most reliable indicators in Indian elections.

Read MoreAre Indian stocks due for a post-election correction?

A clear majority would give Modi, a tea vendor's son and the chief minister in the western state of Gujarat, a clear mandate to push through his economic agenda.

Modi has promised that, if elected, he would take decisive steps to unblock stalled investments in power, road and rail projects to revive economic growth that has fallen to a decade low of below 5 percent.

"Modi has said very clearly that its 'toilets over temples.' For a deeply religious man, that kind of very stark statement is an interesting indication of his commitment to develop the country," Thomas R. Pickering, a former U.S. ambassador to India told CNBC.

Modi, credited for his pro-business policies in Gujarat, has raised expectations that he will be able to revive India's economic fortunes.

Analysts say four critical areas the new government will need to focus on are fiscal belt-tightening, improving the business climate, complementing anti-inflation efforts and sustaining the improvement in the current account deficit. 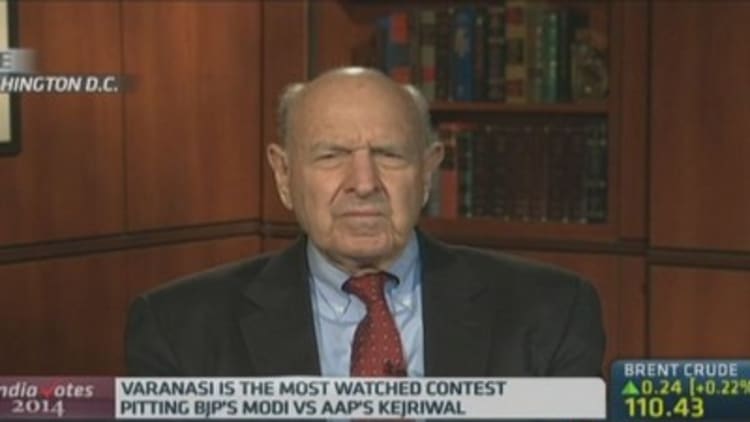 But Modi is also a controversial figure.

"He's dragging two burdens that are still there and are not going to go away," said Pickering.

"One of those burdens is that he sat back when Muslims and Hindus killed each other in his own state. And the argument is that he didn't use the police force to do what it should have done as governor," he said. "The second is that he has turned into something of religious zealot."

Read MoreMeet the man that's tipped to be India's next leader

The 2002 riots in his home state led to a travel ban on Modi in the U.S. and parts of Europe. The U.K. lifted its travel ban on Modi in 2012 and there is speculation that Washington will do the same if Modi becomes India's next PM to kick off relations with the new government on a strong note.

In addition, there has been some talk in the local media in recent weeks that the Reserve Bank of India's well-respected Governor Raghuram Rajan could come under political pressure to rein in his hawkish stance on inflation under a Modi government.

"Rajan has done a spectacular job as the governor of the central bank and any incoming prime minister would have to be very cautious about how they treat him," Sam Gupta, CEO and CIO at Grand Trunk Capital Management, tells CNBC Asia's "Squawk Box."

- Reuters contributed to this report