The Iraqi government claims that uranium and chemical weapons have been seized by the Islamic State in Iraq and Syria (ISIS). Its propaganda is intended for both international and domestic audiences.

Prime Minister Nouri Al-Maliki hopes the United States will launch air strikes against ISIS. He also wants to scare Iraqis into believing that he is only one capable of keeping ISIS from overrunning the country. 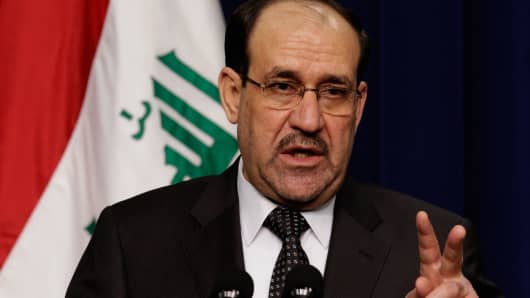 Iraq's UN Ambassador wrote that "Iraq is unable to fulfill its obligations to destroy chemical weapons." He warned that ISIS seized nearly 40 kilograms (88 pounds) of nuclear material from a facility at Mosul University, which "can be used in manufacturing weapons of mass destruction." The U.S. is downplaying the problem. The uranium is not weapons grade.

Read MoreU.S. needs to pay attention to what Iran wants in Iraq

Maliki wants to provoke military action by the Obama administration. He is also clamoring for F-16 war planes and Apache helicopter gunships. But President Obama is taking a cautious approach. Obama insists that he will only consider military action after Iraqis form a government of national unity.

Iraqis met on Monday to negotiate a coalition government. Talks collapsed after 30 minutes. Iraqis, including other Shiite political parties, want Maliki to step down before discussing a slate of candidates for President, prime minister and speaker of the parliament. Maliki refused; he is more focused on retaining power than reconciliation.

Read MoreA grand bargain between Turkey and the Kurds

Maliki is also trying to portray himself as the indispensable leader. By linking ISIS and weapons of mass destruction, he wants Iraqis to believe that only he can prevent catastrophe. Only he can keep the army from falling apart, and defeat ISIS.

If anyone should be concerned about WMD falling into the wrong hands, it's the Kurds. Saddam Hussein used sarin and mustard gas to attack the Kurdish village of Halabja on March 16, 1988. More than 5,000 men, women, and children perished that morning.

However, Kurds were nonchalant in response to Maliki's claim that ISIS had seized WMD. They see it as a ploy by Maliki to stay in power.

Iraq is already a failed state. Rather than push Iraqis to establish an inclusive government, the Obama administration should adopt a reality-based approach. Maliki is Iran's agent; ISIS is a terror state, controlling a third of Iraq's territory. The Kurds are America's only friends in Iraq. They need help defending themselves against both Baghdad and ISIS.

Commentary by David L. Phillips, director of the Program on Peace-building and Human Rights at Columbia University's Institute for the Study of Human Rights. He is a former senior adviser and foreign affairs expert to the U.S. Department of State during the administrations of Presidents Clinton, Bush and Obama. He is also author of the forthcoming book, "The Kurdish Spring: A New Map for the Middle East" (Transaction Publishers).

Read MoreIraq war: Here are the worst and best scenarios