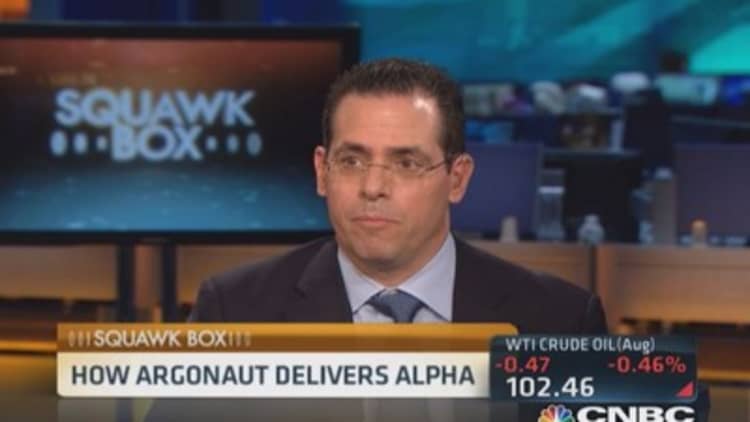 "If the Fed loses credibility," the Argonaut Capital Management president warned in a "Squawk Box" interview, "you'd be in for a good correction on the stock market. Ten percent easily, I think."

Economists expect the central bank to keep rates near zero until at least the middle of next year.

Gerstenhaber thinks that's too long. "I think they are behind the curve."

Before branching out on his own, he was one of legendary investor Julian Robertson's first so-called tiger cubs, responsible for some big market calls during the 1990s such as the collapse of oil prices after start of the Persian Gulf War and the plunge in the British pound.

The message in Wednesday's release of the minutes from the Fed's June policy meeting reiterated a dovish notice to the market, while spelling out the endgame this fall for its massive bond-buying program. But that meeting happened before last week's stronger jobs report, which could start to change the calculus.

A trader works on the floor of the New York Stock Exchange during a press conference with Janet Yellen.
Jin Lee | Bloomberg | Getty Images

"The real question is whether the Fed changes its tune in September," Gerstenhaber said. "If we see the economy continuing to move ahead at a reasonable clip, the monetary policies settings on a forward basis are inappropriate."

He added, "The idea that rates at the end of the year should be higher is one people ought to pay attention to."

In the lead-up to Fed Chair Janet Yellen's testimony before Congress next week, investors will be looking for rate clues from three regional Fed presidents Friday. Philadelphia's Charles Plosser, Chicago's Charles Evans and Atlanta's Dennis Lockhart will all be speaking at the Rocky Mountain Economic Summit in Jackson Hole, Wyoming.