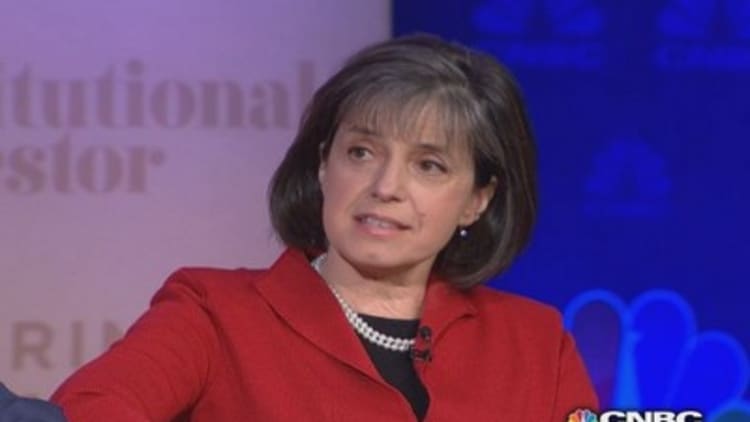 Mendillo said that she had "no regrets" on how she structured Harvard's investment portfolio at the Delivering Alpha conference presented by CNBC and Institutional Investor Wednesday. She was responding to a question about whether a simple mix of 60 percent stocks and 40 percent bonds might have performed better.

Mendillo recently announced that she would depart $33 billion HMC at the end of 2014.

Mendillo gave a simple "no" to the question of if Harvard's relatively low allocation to U.S. equities—apparently resulting in Harvard to miss some broad stock market gains—was part of the reason she decided to leave her post.

Mendillo said that while Harvard's allocation to U.S. equities was relatively low, it had other investments in international stocks and private equity firms.

"We believe in public market equities. We want to be there. We have been there and we participate in those markets in a very active way," she said. "Equity exposure is very important but diversified equity exposure is even more important."

Harvard estimates its endowment has returned 11 percent to 12 percent a year under Mendillo's watch. The university has already started a search for her successor.

Harvard University President Drew Faust praised Mendillo in June. "Jane has been an excellent leader for HMC and a true partner for the University," she said in a statement. "She has repositioned the endowment and re-established a world-class investment platform to support Harvard and all of its activities for many years to come."

Don't bet that the bottom is in for what were high-growth tech firms, private equity investors say
Eric Rosenbaum
watch now
watch now
VIDEO04:23
Why activist investor Bluebell Capital is targeting BlackRock over 'ESG hypocrisy'
An uphill battle could await activist Trian as the firm snaps up a stake in Disney
Kenneth Squire
Read More