The new power of millennial Hispanics

Politicians and pundits have long been talking about the new non-white majority in the United States, and especially about the growing numbers and clout of Hispanic-Americans. As of the 2011 census, around 52 million Americans called themselves Hispanic, about 17 percent of the population — but their influence is even greater. Whether first-generation Americans, immigrants or members of families with deep roots on this side of the border, Hispanics are shaping discussion and policy on everything from immigration reform to gay marriage. They're the swing in more and more swing states. 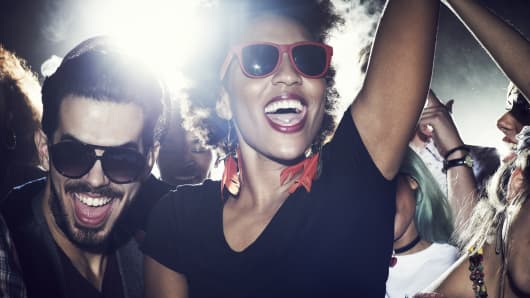 But while the policy wonks are paying attention to their political power, those of us in the marketing world would do well to pay attention to their buying behavior. And although Hispanic-Americans are integrated into communities across the entire country, their numbers and their influence are greatest in the border states of Arizona, California, New Mexico and Texas. And as with any demographic segment, the youngest members of the group merit the most attention; not only do they have real buying power now, but they're also a sign of things to come. Every month for the next two decades, some 50,000 Hispanic-Americans will turn 18.

Read MoreLook who's in the stock market now: Millennials

Plus, no other immigrant group over the past 100 years has formed such a large part of the American population. Hispanics account for one in five schoolchildren and one in four newborns. And no other major immigrant group in the United States has had its root cultures so close at hand. Los Angeles is closer to Mexico City than to New York (1,800 miles versus 2,800 miles). It's not just geography, though. Whereas earlier generations of Irish and Polish immigrants strove to assimilate, many 21st-century Hispanics would prefer to stick with their language, culture, customs and cuisine.

For all these reasons and more, the public relations agency where I serve as CEO, Havas PR North America, fielded an online study of 800 Hispanic and non-Hispanic people ages 18 to 24 in the Southwestern border states. Here are some highlights:

Festive cheer. St. Patrick's Day used to be the only "immigrant" festival widely celebrated in the United States. Now Cinco de Mayo is just about as popular. Hispanics are as keen as non-Hispanics on traditional American holidays such as Christmas (86 versus 84 percent) and Thanksgiving (75 versus 73 percent), but more Hispanics accord importance to family-focused events such as Mother's Day (79 versus 72 percent) and Father's Day (69 versus 62 percent).

Read MoreMillennials are dragging down homeownership

Border-state commitment. A strong majority of border state Hispanics (68 percent, versus 57 percent non-Hispanics) said they felt committed to living in their part of the United States. They want a safe family life in a welcoming community with opportunities for work, education and entertainment, and they take pride in contributing to a distinctive culture with depth and roots.

Viva San Antonio! Call it the Castro effect: Just as San Antonio's young, popular Hispanic mayor, Julián Castro, is being tapped by President Obama as HUD secretary, the city came out tops in our survey. It was the clear front-runner among Hispanics, thanks to its reputation for a dynamic economy, employment opportunities, and affordable living, culture and attractions, plus tolerance. Other favored cities were San Diego, Los Angeles, Phoenix, Austin, Albuquerque, Dallas–Fort Worth, Houston, San Francisco and Tucson.

Looking good. The Hispanics in our survey — both male and female — were more interested in fashion and shop more often at local fashion stores than non-Hispanics (46 percent versus 32), which is in keeping with their strong community values.

Foodies by culture. Food, and sharing meals with family and friends, is a core part of Hispanic culture, and our respondents mentioned it often. Overall, 78 percent of Hispanics reported dining out at least once a week, compared with 64 percent of non-Hispanics. (This helps explain why national data shows that Hispanic-Americans accounted for 25 percent of restaurant visits in 2011 even though they only constituted about 17 percent of the population.)

Complex family ties. Among Hispanics, familia is associated with a bigger range of connections than the American nuclear family. It encompasses parentesco (kinship ties), compadrazgo (real and fictive godparenting) and cuates (twin brothers, or buddies). Among women in the survey, far more Hispanics than non-Hispanics (34 percent versus 22) lived with parents or family — a gap of 12 percentage points. The overall percentages of live-with-parents males were even higher among both ethnic cohorts (39 percent versus 31).

American dreamers. Horatio Alger tales might have characters named Horatio Alvarez today. Hispanics start new businesses at far greater rates than non-Hispanics — an annual increase of 6.7 percent versus 3.1 percent since 2007. In our survey, owning their own business was important for significantly more Hispanics than non-Hispanics (54 percent versus 43). As with previous immigrant groups, Hispanics rely on their communities as they pursue their American dream — and now that their communities are bigger than those of other "minorities," they have critical mass.

Although all millennials have clout today, business leaders need to pay particular attention to Hispanic millennials — both for their spending power now and for their ability to influence what comes next.