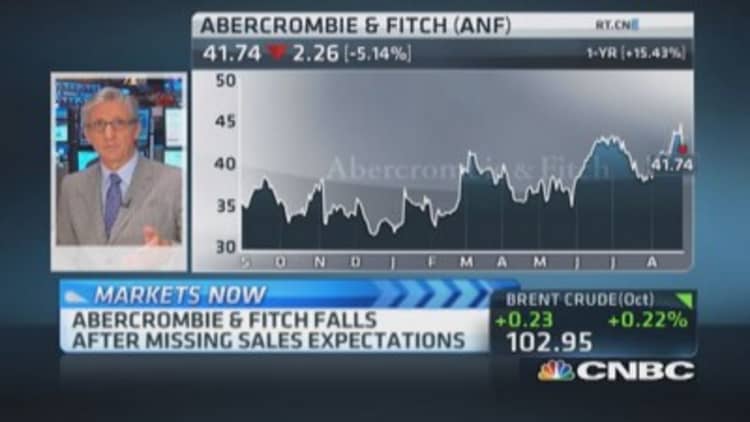 U.S. stocks declined on Thursday, pulling the S&P 500 back below 2,000, as concerns about Ukraine overtook upbeat reports on the U.S. economy and the labor market.

"The recent U.S. data is positive, but we're grinding against the world; it's hard to decouple for too long," said Paul Karos, a senior portfolio manager at Whitebox Mutual Funds.

"We only need Ukraine and Russia to flare up to trigger a reason to sell," said Nick Raich, CEO at the Earnings Scout.

The improved economic reads on second-quarter growth "are not a surprise, given we had better second-quarter earnings. But what is important is that of the relatively small number of companies that have reported in the last three weeks is there is a weakening trend in earnings revisions for the third quarter," Raich added.

Ahead of the open, stock-index futures briefly cut their losses some after government data.

Figures from the Commerce Department showed the economy expanded more than previously projected, with gross domestic product rising at a 4.2 percent annualized pace, versus an earlier estimate of 4 percent that follows contraction in the first quarter.

Another report from the Labor Department had the government's count of Americans filing for jobless benefits dropping by 1,000 to 298,000 last week.

And, the National Association of Realtors reported more Americans signed contracts to buy existing homes in July, with its index of pending home sales up 3.3 percent.

But the better-than-expected data was overshadowed by reports of intensified fighting in Ukraine, with that nation's president on Thursday saying Russian troops had entered the country and were fighting along alongside Russian-backed separatists.

The Dow Jones Industrial Average shed just over 100 points, before recouping more than half of those losses to close down 42.44 points, or 0.3 percent, at 17,079.57, with Visa, JPMorgan Chase and Boeing leading blue-chip declines that included 18 of 30 components.

Trader on the floor of the New York Stock Exchange.
Getty Images

The yield on the 10-year Treasury note fell 2 basis points to 2.334 percent and the dollar held steady against an index of other global currencies.

On Wednesday, stocks ended little moved as Wall Street caught its breath, with the S&P 500 closing at a record just above 2,000 for a second consecutive session.

Read MoreStocks near unchanged as S&P 500 ends above 2,000 again 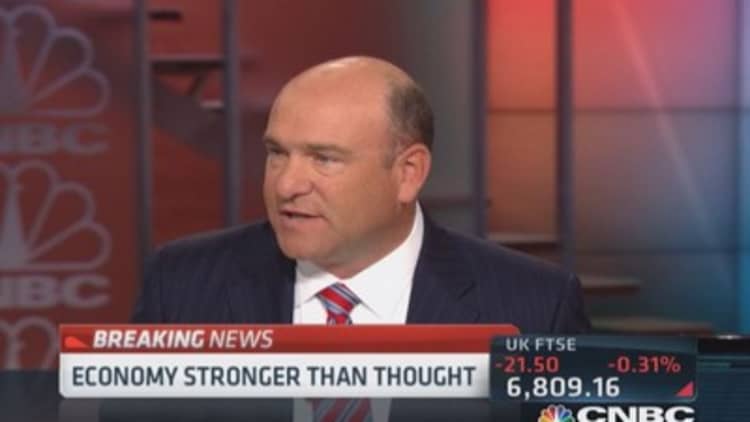