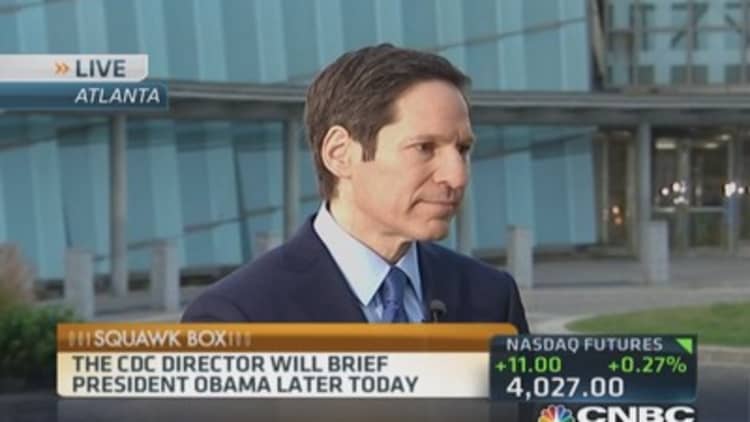 The head of the CDC told CNBC on Monday that while Ebola continues to spread in West Africa there's a possibility that the U.S. will see another patient with the disease like the one in Dallas.

Dr. Thomas Frieden, who plans to brief President Barack Obama later Monday, refused to say on "Squawk Box" whether flights into the United States from the nations being hardest hit by the outbreak should be halted. He did say that we shouldn't do anything that would make containing the disease there more difficult. He used the example of aid workers trying to get into the affected zone being held up by canceled flights.

The World Health Organization has not placed any restrictions on travel and has encouraged airlines to keep flying to the worst-hit countries. British Airways and other airlines have suspended some flights.

"Right now we've made sure there's a rigorous exit screening process," Frieden said. The director of the Centers for Disease Control and Prevention added that the best way to keep Americans safe from Ebola is to stop it at its source. He reported progress on containing the disease in Africa. 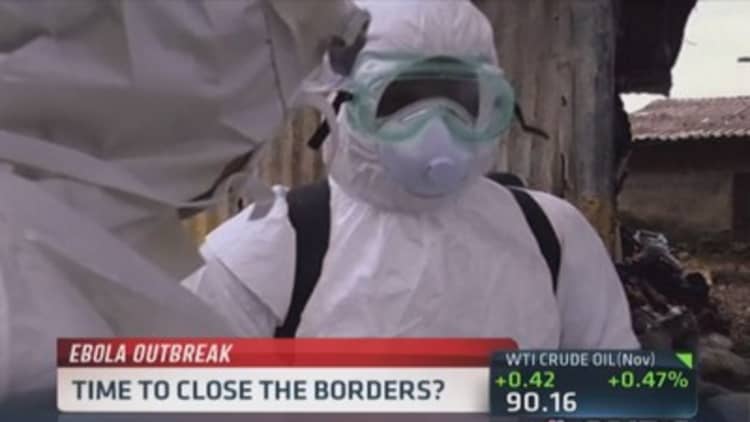 Dr. Scott Gottlieb of the American Enterprise Institute agreed with Frieden about allowing flights to continue, saying a ban "would probably destabilize the situation in Africa."

"There are steps we can take to increase the screening," he continued. "For example, we could put the CDC in charge of the outbound screening to make sure people don't board those flights if they have signs or symptoms of Ebola or contact."

The condition of the only confirmed Ebola patient in the U.S. has worsened to critical. Thomas Eric Duncan became sick after arriving two weeks ago in Dallas from Liberia—one of the West African nations hit by the outbreak that's killed at least 3,400 people since March. About 50 people who came into contact with Duncan are being monitored.

Procedures are being put in place to make sure medical personnel in the U.S. know how to react to patients showing possible Ebola symptoms, Frieden said. Before being admitted, Duncan was sent home with antibiotics. The CDC director called this a "teachable moment."

Gottlieb, who formerly worked in the Food and Drug Administration, said it's possible Duncan could have infected others. "You might see some secondary spread from this index case [in Dallas]. This is just the tip the iceberg if we don't control it."

Meanwhile, Frieden said two experimental vaccines to fight the virus have shown promise. "We need to get them in to the field ... to see if they work in Africa as quickly as possible."

Read MoreNBC News freelancer with Ebola arrives on US soil

—Wires services contributed to this report.