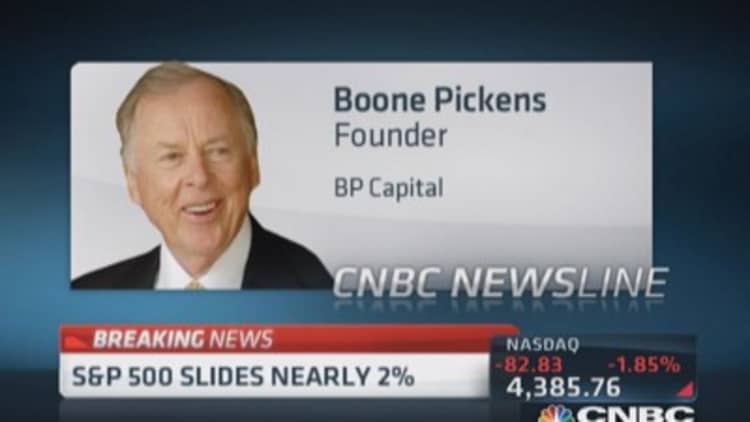 With oil plunging to multiyear lows and global worries sending the stock market tumbling, oil and gas entrepreneur T. Boone Pickens said now is not the time for alarm.

"Let's don't panic here ... that the energy boom is over and everything's gone to pot because I don't think for a minute that's what's going to happen," Pickens said in an interview with CNBC's "Street Signs."

Read More Crude settles at its lowest since December 2012

Pickens, founder of BP Capital, said while energy is the factor on global growth or recession and has been the big driver in the U.S., he said the best thing to do is wait and "see what happens" when OPEC meets Nov. 27.

Pickens doesn't think Saudi Arabia will make any moves until that meeting, when OPEC will decide whether to cut production and drive prices up or let prices drift down to put pressure on competitors.

"I'm looking to see if Brent breaks below $90. That could be critical," he said. "There is some feeling that the Saudis [are] not only trying to maintain market share, but may figure that the best way for them to get back control is to take the price down, perhaps below $80, and that would cut back the frackers and a variety of other people."

While some are predicting Brent will continue to nose-dive, Pickens doesn't think it will go to $70.

Read MoreHow low will gas go? Under $3 a gallon coming soon near you

"I can see it going under $80," Pickens said. "Under $80 you're going to start to see the E&P [exploration & production] companies, they'll start cutting their capex [capital expenditure] and it'll sober everybody up."

As for the energy boom in the U.S. slowing down because of prices, Pickens said: "Oil has been there 300 million years. So it isn't likely slowing down and losing anything. It just slows down and when the price comes back up, everybody goes back to work again."

There is still money to be made in oil on the demand side, Pickens said, which his firm is doing in its funds.

"Take advantage of it, play the demand side."