Reports of the resignation of Japan's Trade and Industry minister on Monday have raised questions about Prime Minister Shinzo Abe's levels of public support and the future of Abenomics.

"I do expect there will be a major impact on Abenomics and the reform process because... when ministers are stepping down or getting damaged, politics becomes very difficult in Japan again," Martin Schulz, senior economist at Fujitsu Research Institute told CNBC.

Obuchi and Matsushima were two of the five female cabinet members appointed in a cabinet reshuffle two months ago, in a move seen as an attempt by Abe to boost his popularity and demonstrate his commitment to encouraging more women back to work in Japan.

"Ms Obuchi is a popular figure among Japanese population and as a working mother, Abe must have wanted her to become a symbol of his 'womanomics' agenda. Thus, her resignation would deprive him of such a strategy," said Tajuji Okubo, principal & chief economist at Japan Macro Advisors.

"The resignation would certainly hurt Abe's popularity," he added. 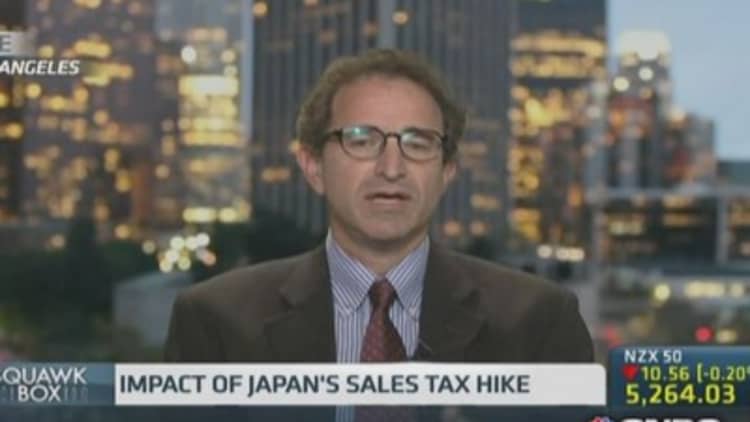 Another economist, who preferred to remain unnamed, told CNBC the resignations could threaten Abe's power with his own party.

"Abe had a very stable cabinet and a very tight grip on the Liberal Democratic Party (LDP) so far and this has changed now... two resignations in one day is a lot and has a big impact from a political point of view," said the source.

Obuchi was tasked with selling Abe's unpopular plan to restart offline nuclear reactors to a public concerned about the safety of nuclear energy following the 2011 Fukushima disaster, and her resignation could damage the government's already uncertain energy policy going forward, added the source.

"From early spring the government has been working on an energy plan with little impact and success so having a minister who is very closely tied to the message of getting things going resign is extremely problematic for energy policy right now," he added.

Others were less convinced the move would impact the prime minister's success in the future, however.

"I don't think this will make it harder for him to get his policies through," said Nicholas Smith, Japan strategist at CLSA.

"Abe is still very, very popular. There isn't a politician in my database which dates back to 1987 that has ever been this popular this far into his administration," he added.

Abe's strong public support has waned some in recent months. It fell 6.8 percentage points to 48.1 percent in a weekend survey by Kyodo from last month.

"The PM is going to replace both of them [Obuchi and Matsushima] in the next 24 hours and my guess is they'll end up putting in more qualified, more credible people.. I don't see it as a major setback at all," added Smith.