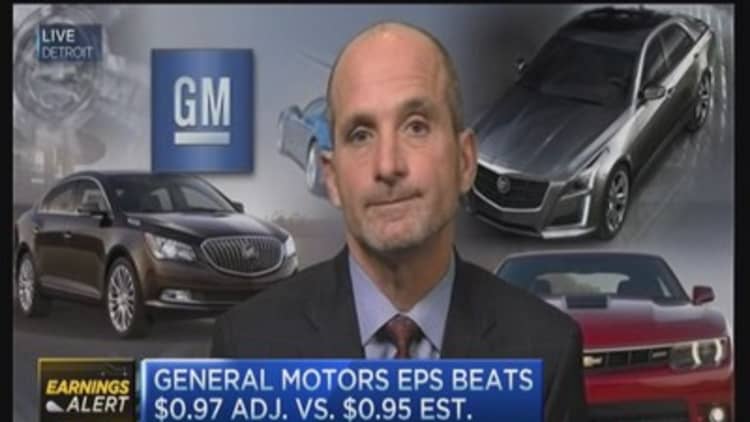 GM on Thursday posted earnings of 97 cents per share, up from 96 cents a share the year before. Revenue came in at $39.3 billion, decreasing from $38.98 billion a year ago.

After the announcement, the automaker's shares rose 2 percent in premarket trading. (Click here to get the latest quotes for GM.)

Also after the announcement, GM CFO Chuck Stevens told CNBC's "Squawk Box" that the issue of defective Takata air bags was largely in the rear view and that the broader recall of the equipment would not have a material impact on the company.

GM announced on Wednesday it had begun warning owners of some Pontiac Vibe and Saab 9-2X vehicles outfitted with Takata air bags to avoid driving with a passenger in the front seat. In addition to those GM models, the National Highway Traffic Safety Administration has urged owners of other car brands to replace the Takata air bags as soon as possible.

"This recent news, beyond the impact that was announced in the Saab and Vibe vehicles, is really not a major issue for us at this point," Stevens said Thursday.

Stevens said GM's roughly 10-percent growth in revenues from North America from the year-ago period underpinned the company's performance in the quarter. He said the company had achieved 9.5 percent margins and its fifth-consecutive quarter of year-over-year margin growth excluding the impact of recalls.

GM was fined $35 million for its slow response to a faulty ignition switch recall. After enduring criticism for the company's handling of the ignition switches, GM's chief lawyer Michael Millikin announced he is retiring early next year.

Analysts had expected GM to deliver quarterly earnings of 95 cents a share on $39.84 billion in revenue, according to a consensus estimate from Thomson Reuters.

In the third quarter, General Motors' global vehicle sales rose 2 percent, driven by robust demand from China and the U.S. This marks the company's best third quarter global sales since 1980. This year, the automaker has recalled more than 30 million vehicles.

Read More Rolls-Royce: Biggest and most expensive Phantom fleet ever

Stevens said General Motors is on track to achieve its goals of 10 percent margins in North American earnings before interest, taxes and amortization, and profitability in Europe and 9 to 10 percent margins on a higher revenue base in China. 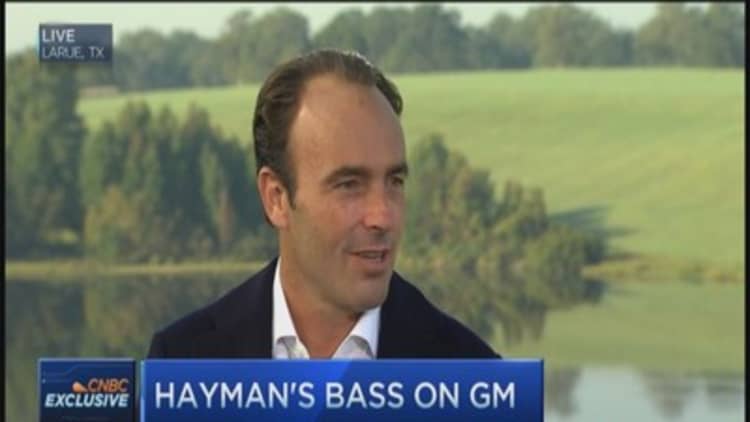