If the commodity markets were followed as widely as the stock market, the financial world would be buzzing with the news of a crash that has taken place in the value of "stuff." 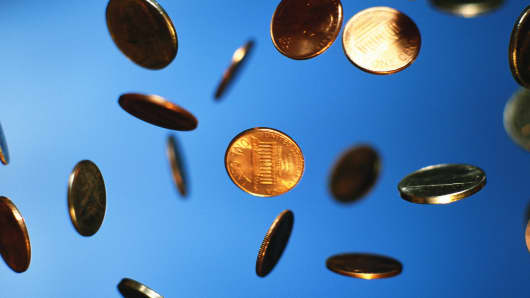 While the plunging prices of oil, natural gas and gasoline are making headlines every day, thanks to the benefits accruing to consumers of energy products, the message of the commodity markets, in many ways, is hardly a reassuring one when it comes to the outlook for global economic growth.

Read MoreCommodities: The selloff may carry on into 2015

Basic materials prices for the likes of copper, nickel, iron ore, and other industrial commodities, have collapsed, both in advance of, and now coincident with, weakening economies from Madrid to Moscow and from Berlin to Beijing.

This is not good news for the global economy.

Certainly oil's collapse has, in large part, been due to the gushing amounts of crude being produced around the world, especially here in the U.S. But demand is also falling, at the same time, suggesting that 2015 may be a rough year for the global economy.

Copper prices are now below $3 a pound and there's an expression that "the economy is topped with a copper roof." More simply put, copper tends to top out in price, before it becomes obvious that, in this case, the global economy is about to weaken.

Agricultural commodity prices have also fallen dramatically with little, or no, fanfare.

I believe the weakness in commodity prices is more relevant to failing growth outside the U.S., but it needs also to be watched here at home.

Read MoreWhat US should do to fight this 'oil war': Insana

We already have evidence that the commodity crash has ominous portents for the rest of the world:

* China's demand for basic materials, amid a glut of uneconomic construction projects, appears to be plummeting.

* Russia's ruble has collapsed and the country is on the brink, if not already in, a recession.

* Europe's growth rate and inflation rate, for the next two years, were just revised downward by the European Central Bank, suggesting that Europe's economic crisis is far from over. In fact, at least one former European leader with whom I recently spoke, believes the crisis in Europe may just be in its early stages.

* Brazil and other emerging market nations are struggling with a variety of issues, from recessions at home, to the rising value of the dollar, which is complicating how emerging markets conduct economic policies at home, given how closely their currencies are tied to the greenback.

And yet, amid all this, commodities are not being treated with the respect they deserve. This is a crash and, in many ways, it has been a silent one.

The crash in commodities, and its distressing effect, is also reflected in ultra-low interest rates in both developed, and developing nations.

The message of the commodity, and global interest-rate markets, should be met with some alarm in policy centers around the world.

"Fortress America" is still standing, despite the commodity crash, largely because the U.S. is a major consumer of commodities and, thus, benefits disproportionately from lower prices.

Read MoreUS poised to become the world's only superpower: Insana

However, as recent published reports suggest, the U.S. faces some risk as well. Energy producers, staring down the barrel of $62 oil, are already curtailing billions of dollars in exploration and production plans for 2015, a factor which could inhibit job growth in the booming energy sector and in the resurgent manufacturing sector, as well.

Highly leveraged energy companies, hammered by the crumbling price of crude, could cause a mini-financial crisis as they default on high-yield debt that financed their speculative, wild-catting adventures.

A collapse in global growth could affect the U.S. economy by trimming exports and reducing the earnings power of U.S. multi-national corporations. Corporate profits have been a steady source of support for stock prices over the last 5 years, but that could change if the global economy enters a renewed, and deepening, recession.

While I firmly believe in my "Fortress America" thesis, that is, that the U.S. is becoming increasingly less reliant on the rest of the world for growth, we ought to pay heed to the signals emanating from this commodity crash.

Investors are always hurt by what they pay attention to the least.

And while I believe that, for the most part, the falling cost of "stuff" is good for the U.S. consumer, and the U.S. economy, it's also a warning sign that we should be mindful of, given the vast number of folks who simply aren't paying enough attention to mundane topics like the collapsing cost of commodities.

Commentary by Ron Insana, a CNBC and MSNBC contributor and the author of four books on Wall Street. He also editor of "Insana's Market Intellgence," available at Marketfy.com. He delivers a daily podcast, "Insana Insights," and a long-form weekly version, both available on iTunes and at roninsana.com. Follow him on Twitter @rinsana.

Disclosure: Ron Insana doesn't trade any of the commodities mentioned in this article.