Are volcanoes the energy source of the future?

The Reykjanes Peninsula, a finger of black rock jutting out over the Mid-Atlantic Ridge from Iceland's southwestern coast, has long leveraged its unique volcanic geology into economic opportunity. Its spectacularly carved edifices and vast lava fields draw naturalists from around the globe, while geothermal pools heated by deposits of steam and magma deep below ground provide the anchor for a thriving resort economy.

The region is even powered by this geology; the 12 geothermal wells feeding 600-degree steam into the two turbines at Reykjanes Power Station provide a collective 100 megawatts of power for the surrounding area, enough to power many tens of thousands of homes.

Conventional geothermal power plants like the one at Reykjanes make possible the kind of energy economy that has made Iceland a model for the world; the country generates virtually all of its electricity from renewable resources—a quarter of it from geothermal alone—making Iceland the poster child for geothermal energy usage in a world dominated by hydrocarbon economies.

But conventional geothermal energy—based on technology that's been around since the 1970s—can only take an energy economy so far. If a consortium of researchers and energy companies has its way, Reykjanes—which is home to four volcanoes—could soon be ground zero for a geothermal energy revolution that could change the way countries and economies around the world view and utilize their geothermal resources.

If all goes to plan, this year the Iceland Deep Drilling Project (IDDP)—a collaboration between the National Energy Authority of Iceland, a global team of academic scientists; and the energy companies HS Energy, National Power Company and Reykjavik Energy (Alcoa and Statoil have also participated)—will begin drilling a geothermal well deep into the region's vast volcanic field in hopes of unleashing energy from superheated steam, and perhaps even the molten rock itself, lurking several thousand feet below the surface.

Rather than seeking the typical hot water and steam that drive the peninsula's conventional geothermal power generators, the engineers at this new well (named IDDP-2) will drill at a depth of 4 km to 5 km (13,000 ft to 16,000 ft) in an attempt to tap directly into so-called "supercritical" water deposits—fluids under such intense heat and pressure that they exist in a state that's neither liquid nor gas. (For comparison, pure water goes "supercritical" at roughly 700 degrees Fahrenheit when under 221 bars of pressure, or 221 times the atmospheric air pressure at sea level.)

That means drilling down close to the very magma deposits that provide the heat and pressure and figuring out what to do with whatever superheated materials engineers find there. If the researchers at IDDP-2 can master the techniques necessary to turn supercritical fluids—or even superhot magma itself—into usable geothermal energy systems, they could boost the output of the average geothermal installation by 10 times, upending the economics of the industry.

First, they'll have to play with fire.

Five years ago IDDP engineers tried this for the first time in hopes of cultivating an exportable energy technology to help stoke Iceland's flagging economy. An accident triggered a discovery they have been pursuing ever since. While drilling at IDDP-1 deep inside a volcano called Krafla in northeast Iceland, they reached about 2 km (6,500 ft) before they unexpectedly struck magma intruding into the Earth's upper crust from below, at searing temperatures over 1,600 Fahrenheit. The superheated steam set a world record. The IDDP had punched straight through into the bowels of a volcano.

"We discovered that we had developed the hottest wellhead in the world," said Dr. Wilfred Elders, an emeritus professor of geology at the University of California, Riverside, and co-chief scientist for the IDDP. Landsvirkjun, Iceland's national power company and the owner of the well, had no idea what to do with superheated magma bubbling up the well pipe at temperatures upward of 1,600 degrees Fahrenheit. "At that point, we could have abandoned the well," Elders said. "We knew we had this very high energy heat source, but we didn't know how to deal with the temperatures and pressures."

Read MoreThe future of energy: You may be walking on it

Instead, Landsvirkjun pushed ahead with well construction, inserting a special steel casing into the well and leaving a perforated section at the bottom closest to the magma. Heat was allowed to slowly build in the borehole, and eventually superheated steam flowed up through the well for the next two years. During that time, it provided more than half of the Krafla plant's 60-megawatt output. It wasn't until a valve failed that Landsvirkjun was finally forced to seal the well by pumping in cold water.

But the IDDP is by no means finished chasing the promise offered by so-called high-enthalpy geothermal systems. If the planned IDDP-2 well at Reykjanes manages to strike supercritical fluid, IDDP researchers hope to develop a sustainable geothermal wellhead at the site, one that would give them a test bed for developing additional materials and technologies for high-yield geothermal systems that could be deployed anywhere in the world where young volcanic geothermal systems occur.

It turns out there's a whole lot of places with access to untapped geothermal resources, many of which are moving quickly to bring those resources online. "Worldwide, geothermal is booming," said Benjamin Matek, analyst and research projects manager for the Geothermal Energy Association, a U.S.-based trade association for the industry. "If you look at Indonesia, at the Philippines and Kenya, they're probably putting up a power plant every other month." 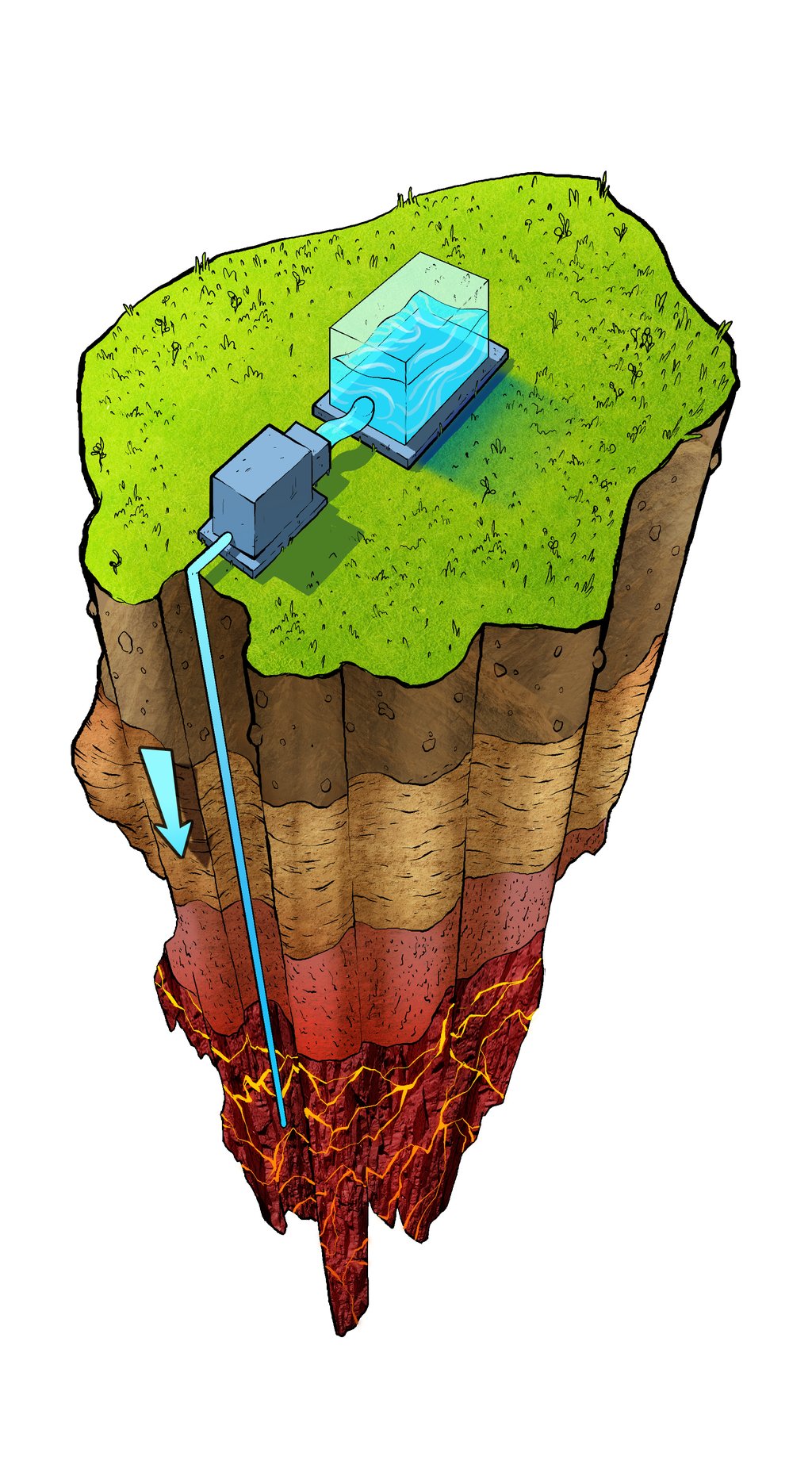 Countries situated near volcanic zones are installing new geothermal resources at a prodigious rate. Globally, the geothermal power market is growing by 4 percent to 5 percent each year, according to data collected by the Geothermal Energy Association. Some 700 geothermal projects are under way in 76 countries, with no signs of slowing down.

But geothermal energy isn't always economically viable. Often supported by government subsidies, the high up-front cost of drilling and exploiting geothermal resources can make it non-competitive with oil or gas exploration. The exploratory borehole at IDDP-1, for example, cost at least $22 million. The GEA notes that the costs vary based on the scope of a project, but the average cost of a 20-megawatt power plant is $30 million. 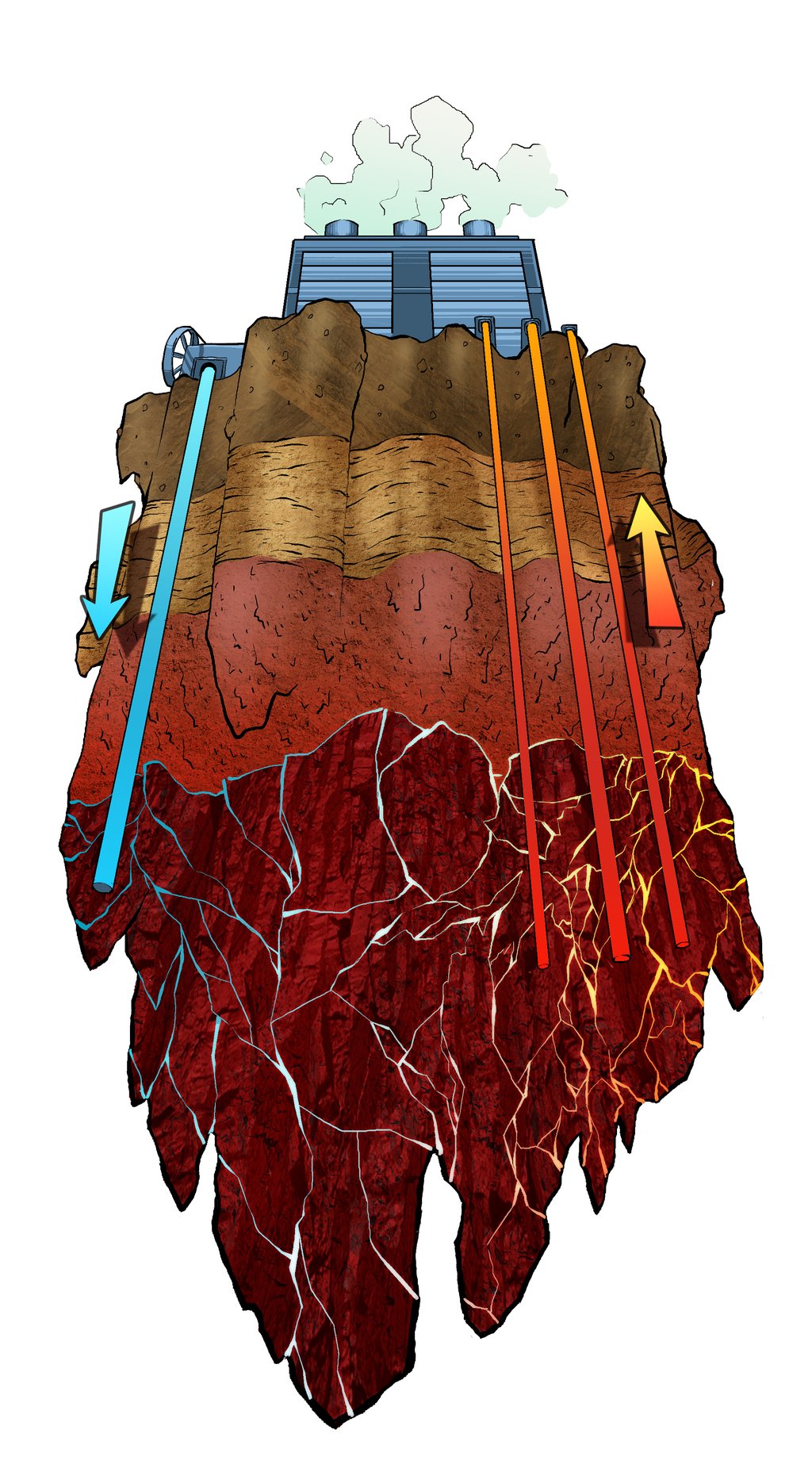 There are other risks as well—real and perceived. In 2006 a geothermal project near Basel, Switzerland, was thought to have triggered a magnitude 3.4 earthquake when the drilling intersected a fault line. The idea of drilling into magma chambers has given rise to fears that doing so could set off a volcanic eruption (though geologists tend to think otherwise). But the allure of cheap, renewable energy is currently trumping most concerns.

The U.S. leads the world's largest producer of geothermal energy, mostly in states like Nevada, California, Utah and Oregon. But America's 3.6 megawatts of installed geothermal are a drop in its larger energy bucket, making up less than one half of 1 percent of the country's total energy consumption. The same is true for many other countries around the globe; though geothermal resources are present, a mix of high up-front development costs, inexpensive access to fossil fuels like natural gas, and the relatively low energy output for installed geothermal resources have hindered development.

That's where the drilling IDDP-2 could make the biggest difference. Researchers like the IDDP's Elders believe that harnessing supercritical fluids—or even the molten-hot energy of magma itself—could drive a step change in the amount of energy countries can pull out of the ground, boosting outputs by an order of magnitude while making geothermal far more economically attractive, not just as a source of electricity but as a commodity.

"I believe that if these drilling projects are successful, it can change the energy picture in Iceland very dramatically," Elders said. "And it could make a big impact on the supply of electricity in Northern Europe." Iceland already has all the clean energy it needs, Elders explained. But Landsvirkjun engineers have long explored the idea of laying a subsea transmission cable from Iceland to Scotland or even to Scandinavia, to ferry energy from Iceland's geothermal fields to grids in Europe, making Iceland a geothermal energy exporter.

In the U.S., geologically active sites across the Pacific Northwest and Western U.S—locales like the Salton Sea near Los Angeles and San Diego, or the Geysers Field in Northern California—are known to contain heat resources in excess of 660 degrees Fahrenheit within a few thousand meters of the surface. Geothermal generators capable of handling supercritical fluids—or even magma itself—could yield far more power per well, making it far more attractive to utilities and governments. The technology—and the business case—aren't that far away.

But why stop there? In October, Elders presented a talk to the Geological Society of America concerning the massive geothermal energy frontier lying just off the coasts of Washington State and British Columbia, where a spreading tectonic ridge lies just offshore. "The amount of heat on the Juan de Fuca Ridge within 1,000 m to 2,000 m of the seabed is enormous," he said. "If just 1 or 2 percent could be converted to electricity, it would be huge." The total potential gigawatts flowing through the ridge could power the entire U.S. many, many times over again, he said.

7 outrageous energy sources of the future

But though tantalizing to think about, the notion of drilling offshore for geothermal resources exists only on paper, Elders said. It's an idea, something worth thinking about and perhaps studying in the future as technology and economics allow. But the idea of supercritical wells on land is very real right now. The IDDP already built one briefly at Krafla. And at IDDP-2, researchers will hopefully get a lot closer to bringing next-generation, high-yielding supercritical geothermal energy technologies to market.

The new well could eventually break down like IDDP-1 did. It could suffer a critical failure at the outset. It could fail to find supercritical fluid at all. But Elders is confident that at some point in the foreseeable future, the IDDP will figure out how to harness this high-temperature energy and convert it into usable power.

"Within the next decade, we'll have several supercritical wells on land, and I think that would get the attention of the industry to develop more wells on land and then perhaps move out to the ocean, where most of the heat flow is occurring along these mid-ocean ridges," Elders said. Vast geothermal resources are out there, and once the business case is made, there's no telling where industry will go with supercritical geothermal technology. But Elders is confident about where it will start. "The proof of concept will come in Iceland."