There are still a lot of questions about exactly what happened to the Germanwings jetliner that crashed Tuesday. The announcement Thursday by a French prosecutor that the co-pilot appears to have acted deliberately while the pilot was locked out of the cabin, has raised questions about a key aviation feature: the autopilot.

CNBC spoke to industry experts to better understand these computer systems that have become a part of how we fly today.

So what exactly is the autopilot?

It is what the name suggests—the autopilot flies the airplane without the human pilots controlling "hands on."

"Basically it is a computer that is running very, very fast," said Paul Robinson, president and CEO of AeroTech Research. "It can almost fly the plane completely between takeoff and landing."

The autopilot system relies on a series of sensors around the aircraft that pick up information like speed, altitude and turbulence. That data are ingested into the computer, which then makes the necessary changes. Basically, it can do almost everything a pilot can do. Key phrase: almost everything.

Before takeoff, the pilot will enter the route into the computer, giving it a start and end position and exactly how to get there. Throughout that route there are a series of points that the computer will note, each having its own speed and altitude.

The autopilot does not steer the airplane on the ground or taxi the plane at the gate. Generally, the pilot will handle takeoff and then initiate the autopilot to take over for most of the flight. In some newer aircraft models, autopilot systems will even land the plane.

Aviation regulations vary between countries, but in the U.S., at least two crew members must remain in the cockpit at all times. From a flying perspective, the pilot or the co-pilot must remain at the controls to keep an eye on the computer to make sure everything is running smoothly.

Occasionally, Robinson said, the autopilot will disengage itself in the event of extreme turbulence, for example, at which the pilot will be alerted to take over control of the plane. But standard procedure for most airlines is the use of automation for much of the flight.

Robinson said the general guidance given to pilots is, "Let the computer do it because it can do a better job than a person." Just think about how hard it would be for a person to concentrate for long stretches of time while flying hands-on, he explained.

But that guidance should not be taken lightly. A pilot must still be completely aware of exactly what it is the autopilot system is or isn't doing. Case in point: in 2013 Asiana Airlines Flight 214 crashed while landing at San Francisco International Airport in what was cited as an autopilot issue. The pilots assumed the autopilot was doing something it actually wasn't doing, on the safe but highly automated Boeing 777, Robinson said.

"Automation is great but if there is a misunderstanding between the crew and the automation system, it can be dangerous," Robinson said.

In that way, autopilot is similar to a car's cruise control. It can take over when you need it to, but you still have to be aware of what the car is doing and where it is going. 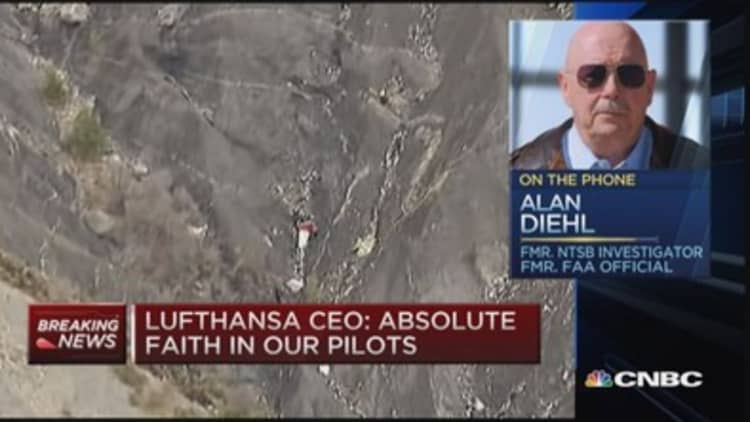 Patrick Smith is an active airline pilot who has been flying commercially since 1990. He told CNBC that the traveling public tends to imagine a pilot reclining back, reading a newspaper, while the autopilot does all the work. The reality is actually quite different, he said.

"The auto flying system does not fly the airplane," he said. "The pilots fly the plane through the automation."

The cockpit can still be a very busy place he said. Pilots are consistently having to command, manipulate and manage various parts of the computer system which requires their full attention. In addition about 99 percent of landings are manual and 100 percent of all takeoffs must be done manually by the pilot. There is not yet such a thing as an automated takeoff.

All of that technology-interfacing still makes for a challenging profession, said Smith.

"Pilots have come to rely on a somewhat different skill set over the past 40 years or so," he said. "But that's not to say that hands-on skills have become any less important."