The nuclear deal with Iran will prove unenforceable. Ultimately, Tehran will become the dominant economic and military power in the Middle East and if it chooses, build nuclear weapons. 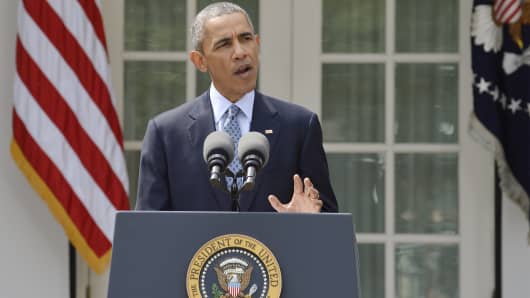 Mike Theiler | Reuters
President Barack Obama speaks about the framework agreement on Iran's nuclear program announced by negotiators in Switzerland during a statement in the Rose Garden of the White House in Washington April 2, 2015.

The United States was successful in assembling an international coalition to impose tough economic sanctions. Restrictions on access to technology, international banks and their electronic payments systems imposed double digit unemployment and inflation and brought Iran to the negotiating table.

Simply, finding buyers for oil shipped via 3 million barrel supertankers was one thing, but the inability to transfer funds through western banks made securing $150 million payments quite another.

The Obama administration sought to dismantle Tehran's nuclear infrastructure, including its underground centrifuge machines, which enrich uranium into fissionable material. However, Tehran balked and other events in the region made Obama desperate for a deal-the rise of the Islamic State in Iraq and Syria, its spinoff in Libya, and deteriorating relations with Israel and Saudi Arabia on issues transcending the Iranian nuclear challenge.

The agreement significantly reduces the number of Iranian centrifuges and other nuclear infrastructure, but only limits Tehran's ability to quickly "break out" from these restrictions and accumulate enough fissionable material to create a nuclear weapon in less than one year. Theoretically, we are told that is enough time for the West to detect Iranian violations and respond — but it is not.

The lifting of economic sanctions has the potential to create an economic superpower with malevolent, anti-western aspirations.

Iran has the oil reserves of Saudi Arabia, the natural gas reserves of Russia, the mineral resources of Australia-including iron ore, bauxite, cooper, and the world's largest supply of zinc-a sophisticated manufacturing sector, a stock market with strong corporate reporting requirements, a well-educated population of 80 million, and a large middle class.

In 2010, Iran produced 1.6 million automobiles — across virtually all vehicle classes — through indigenous manufacturers and joint ventures with western firms. Although sanctions pushed that number down to 1 million in 2014, it bears noting autos are among the most difficult and complex mass production items to make, and Iran's technological potential could quickly put it in the same category as South Korea or even France.

Iran provides Western Europe and China with an alternative to Russian natural gas.

Read MoreWhy a deal with Iran is good for stocks

The surge of European, Chinese and American investment into Iran will be a reminder of the Gold Rush that gave rise to modern California. And once those euros, yuan and dollars are in, political pressures will make it very tough to reimpose western economic sanctions.

Were Iran to start making weapons-grade material, any western actions would be preceded by talks. But as with Russia in the Ukraine, Europe's largest economy, Germany, would be cautious about losing access to Iranian natural gas and its other commercial interests, and similar distractions would impede other European and Asian cooperation.

The U.S. trump card has been its unique grip on the global banking and payments system, but China's success in recruiting European allies to join its Asian Infrastructure Bank demonstrates that Asian alternatives to U.S. dominated western financial institutions will soon emerge.

Even as sanctions handicapped Iran, it has projected power directly and through surrogates in Lebanon, Iraq, Yemen and elsewhere. Once the Iranian industrial juggernaut gets rolling, a society with an anti-western theocratic bent, sophisticated technology and manufacturing industries, and the resource wealth of Saudi Arabia, Russia and Australia combined will emerge as an economic and military power on a par with our European allies.

A decade from now, when UN inspectors discover Iran is building a nuclear weapon, western leaders will ask how they could have let this happen.

Barack Obama will still be around and perhaps will offer some answers.

Commentary by Peter Morici, an economist and business professor at the University of Maryland, and a national columnist. Follow him on Twitter @pmorici1.