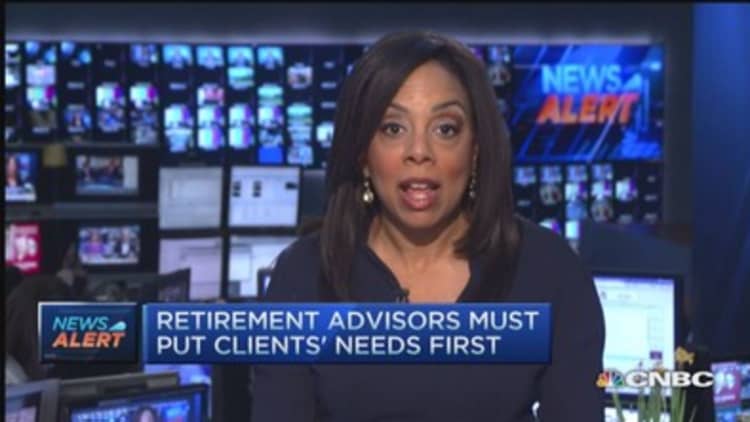 In an effort to ensure investors are getting truly objective advice, the Labor Department on Tuesday issued a proposed rule that would require all advisors who offer retirement advice to put their clients' interests first.

"Conflicts of interest can lead to bad advice and hidden fees," said Labor Secretary Thomas Perez, announcing the proposal in a press conference. "We shouldn't have to question whether the person giving us advice has our best interests at heart."

The proposed rule would extend the so-called fiduciary standard to any advisor or broker offering investment advice to employers offering retirement plans, participants in those plans, and IRA account holders. Many investment advisors are currently required to follow that standard, which means they must always put investors' financial interests ahead of their own.

But brokers are only required to recommend suitable investments, which critics say means they can advise a client to invest in a fund or other asset with higher fees, lower performance, or both, provided it seems appropriate.

Read MoreThe investment help that may not be

"We clearly need to fix the rules of the road so people who are working hard and saving for their retirement can have peace of mind that the advice they are getting is always, always in their best interest," said Jeff Zients, director of the National Economic Council and assistant to the President for economic policy, who announced the proposal with Secretary Perez.

The proposal comes just weeks after the Council of Economic Advisors published a study which found that conflicted investment advice costs investors as much as $17 billion annually.

"It's a very simple principle: You want to give financial advice, you've got to put your client's interests first. You can't have a conflict of interest," said President Obama when he directed the Labor Department to develop the proposal.

Tuesday's proposed rule would require all investment advisors meet the fiduciary standard, but it does not ban forms of compensation that in the past have created incentives for brokers to recommend investments products that may not have been in a client's best interest. Instead, the proposal would "allow firms to continue to set their own compensation practices so long as they, among other things, commit to putting their client's best interest first and disclose any conflicts that may prevent them from doing so," the Labor Department said.

If an advisor gives advice that does not meet the fiduciary standard, the IRS can impose an excise tax on the transaction, and investors also have the right to take legal action against advisors.

The Labor Department estimated that the proposed rule would save investors more than $40 billion over 10 years, adding that "the real savings from this proposal are likely much larger as conflicts and their effects are both pervasive and well hidden."

The securities industry is strongly opposed to the rule change, arguing that investors are already well protected by existing regulations.

In a study published after President Obama called for the proposal, the Securities Industry and Financial Markets Association released a report it commissioned that argued that there is a comprehensive regulatory framework that protects investors. Of the new proposal, the association said, "we want to ensure it protects investor choice and doesn't unnecessarily reduce access to education or raise costs, particularly for low and middle income savers." The industry group plans to issue a more detailed reaction during the comment period.

But others are strongly in favor of the change. "With billions of dollars in excess fees at stake, industry has shown it will stop at nothing to defeat this rule. Release of this proposed rule for public comment is an essential step in the effort to ensure that the interests of retirement savers are protected," said Barbara Roper of the Consumer Federation of America in a statement.

The AARP, meanwhile, has been pressing for a change in the rule for years, and in a statement Tuesday praised "the latest major step" toward new regulations.