The U.K. and Ireland are fast becoming a force in the latest software revolution — fintech, with investment in technology that provides financial services more than tripling in the region, according to the latest report.

A recent report from Accenture revealed that investment in technology in the UK and Ireland rose from $264 million in 2013 to $623 million in 2014, or 42 percent of Europe's total investment.

Much of that growth came in financial technology, or "fintech", with the report showing a 215 percent investment growth in the across Europe. And it is Dublin's International Financial Services Center (IFSC) and London's so-called Silicon Roundabout that are the focus for fintech funding.

CurrencyFair chief executive Brett Meyers told CNBC: "Dublin has the momentum now to capitalise on fintech opportunities which are going to be huge in the coming years.

"Dublin has all the ingredients, people with strong tech and finance backgrounds, a proactive government, access to funding, and a vibrant tech scene that enables the kind of mentoring and support that's required to help entrepreneurs on their journeys."

Realex payments is another Dublin-based fintech company, providing payment-processing services for companies such as Virgin Atlantic, GSK and PaddyPower. that was purchased in March by the New York-listed Global Payments for €115 million. According to Realex's last accounts, it posted an operating profit of €2.1 mn for the year to April 2014. 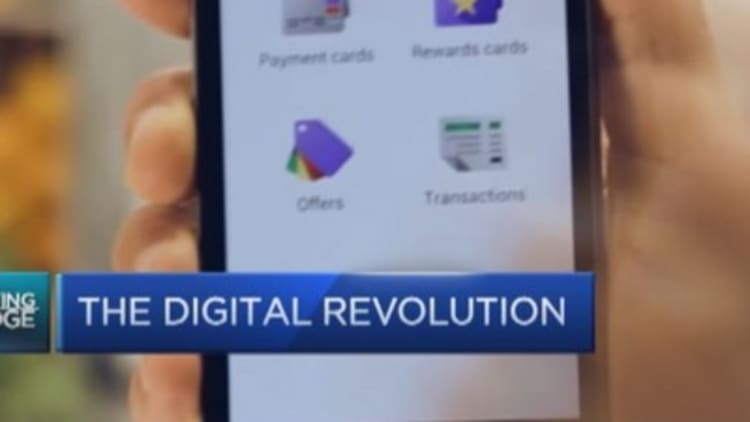 The U.K. and Irish governments have placed great emphasis in attracting investment to both the IFSC in Dublin and Silicon Roundabout in London. Irish Minister of State Simon Harris has unveiled a new strategy for the IFSC aimed at creating 10,000 additional jobs over the next five years. And the plan puts a major focus on driving employment among FinTech companies.

Speaking to CNBC from the Payments Ireland FinTech event in Dublin this week, Harris said: "Fintech is central to Ireland's recently published International Financial Services strategy. It embodies great change. Not only for our established and successful financial services' sector, but also for our burgeoning ICT (information and communications technology) sector. Harnessing the oncoming wave of disruptive technologies is, I believe, an opportunity Ireland is well placed to build on and benefit from"

One thing that sets the industry apart from many others is how it managed to not only remain robust and weather dwindling domestic demand, but actually grow during a period of recession.

"The FinTech sector in Ireland has really started to accelerate over the last 18 months. Ireland and in particular, Dublin, can now credibly be listed as a growing centre of FinTech. Irish FinTech companies are also starting to be noticed internationally. They are winning very significant international clients," Anna Scally, a partner at KPMG in Dublin, told CNBC.

"Irish FinTech companies are being noticed by international acquirers. Global Payments are going to have a global centre of excellence for certain of their activities here in Dublin."