Rummage through a typical woman's closet and there's a good chance you'll find some sign of the Coach, Ugg, Michael Kors or Lululemon brands.

But give it a few years and there's a chance that these female-centric labels won't be limited to ladies' wardrobes.

"For the first time in years, there is a distinct fashion trend in men's apparel toward slimmer fit across category types ... that is driving a revamp in men's wardrobes," Konik wrote in a note to investors on Monday.

"We expect a dominant fashion trend, coupled with a younger demographic that has a stronger affinity for style and spill-over effects from a burgeoning men's market internationally, to drive outsized share gains for higher-end fashion retailers and brands."

Much of the growth in the U.S. menswear category, which grew 2.4 percent $82 billion last year, is coming from the millennial generation. According to Jefferies' research, 50 percent of men ages 18 to 44 said they are spending more on clothing and accessories today than they did three years ago. That compares with just 34 percent for all survey participants. 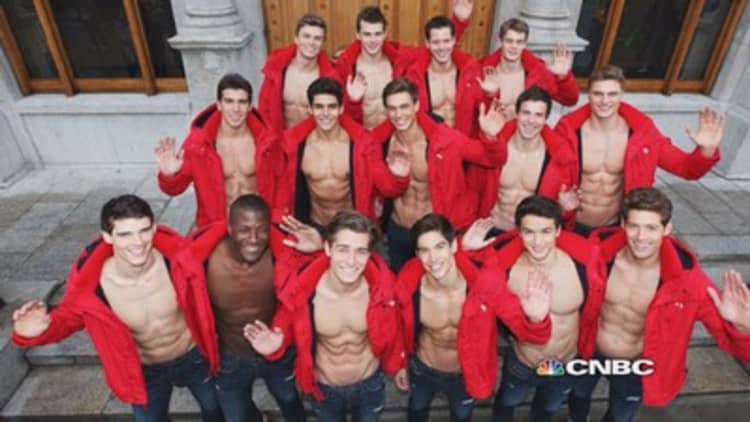 The results also found that men are shopping more for themselves than they did in the past, because they prefer to choose their own clothing and can afford to spend more. Along those lines, they're also less likely to be wooed by low-price fast-fashion stores. That's because men are more concerned with the durability and quality of their clothing and footwear than women.

"These findings collectively suggest to us that with the proper brand messaging, higher-end retailers can be key beneficiaries of the shifting men's retail paradigm so long as they strike the right balance between price and quality," Konik wrote.

Below, he makes the case for four brands (figures are based on Jefferies' estimates and company data):

Many people don't realize that Coach's heritage lies in menswear. Konik said sales of the brand's male-focused merchandise slowed from 1990 to 2010, when the focus shifted toward women's handbags.

"Ultimately, we think the company's $1 billion sales target for the men's division is realistic and achievable and may even prove conservative," he wrote.

Deckers' Ugg brand first dove into men's in 2011, opening its first men's flagship the following year. Tom Brady's role in the label's advertising has contributed to the label's success in men's, Konik wrote.

Of the four companies, Michael Kors' men's business accounts for the smallest percentage of its overall sales. But Konik said the firm's goal of hitting $1 billion in men's sales is achievable. Kors recently launched a new men's scent and a line of men's watches.

Arguably the most associated with womenswear of any brand on Konik's list, Lululemon has achieved a higher profile in menswear after opening its first men's store in New York City over the holidays. The category saw 16 percent sales growth, on a comparable basis, in the fourth quarter.

Konik added that up-and-coming men's retailers including Bonobos and Trunk Club, the latter of which was acquired by Nordstrom last year, will pressure the more traditional names.