If you use Snapchat on any given Wednesday, you'll see MLB Wednesdays featured on its story page. The social app's first regularly scheduled sports program, which officially launched on May 13, collects photos and clips from users who post content during baseball games.

Despite record revenues, some have sounded a death knell for baseball, whose games are often criticized for being long and plodding. What's more, Nielsen ratings show that half of baseball TV viewers are over 55, while declining interest in the World Series has been widely noted, with 2014 viewership down 64 percent from its peak between 1978 and 1982. The Washington Post reported that Little League participation dropped from almost 3 million in the 1990s to 2.4 million in 2013, the last year numbers were reported. Meanwhile, The Wall Street Journal reported that only 14 percent of Americans said their favorite sport was the national pastime, compared with 39 percent who preferred football.

Bowman argued, however, that people may be looking at the wrong stats. He said the Nielsen numbers only look at linear TV viewership, while it's well known that younger viewers prefer watching on digital platforms. It's still a $36 billion industry, with the average team worth $1.2 billion.

MLB.com At Bat was the top U.S. sports app last month in terms of time usage, logging 1.3 billion total minutes of user consumption, according to comScore. ESPN came in second at 8.1 million minutes. The average At Bat user is 30, and two-thirds use it daily, according to the MLB. ComScore also reported that MLB.com was the second most viewed sports website by duration, recording 2.9 billion minutes last month. MLB.TV, which streams games on more than 400 devices, is accessed more than 2 million times a day.

Some publishers have reported that there has been an increase of interest in baseball on their sites. SB Nation said unique visitors to its baseball properties have been up 77 percent year over year (3 million in April 2014 versus 5.3 million in April 2015), and it's on track to have a 100 percent increase in May. Traffic referrals from social media accounts have grown about 150 percent compared to last year. 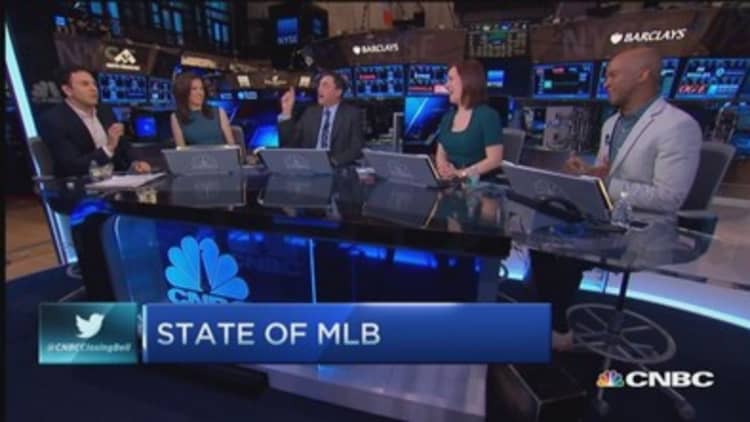 "We're helping them understand the mind of a millennial by creating content that resonates with millennials, helping them grab fans from an earlier age group," Urban said.

MLB's interest in digital started in 1999, when it began planning MLBAM. It was the first media property to stream an entire sports season in 2003, and the technology now powers streaming for HBO Now, ESPN 3 and the WWE Network. It built its first app in 2005. MLB was the first sports league to embrace daily fantasy sports when it invested in Draft Kings in 2013. It's invested heavily in Statcast, its digital tracking program that records the stats in every play. It's put more than $1 billion toward updating ballparks with Wi-Fi and distributed antenna systems to further aid in Internet connectivity. Currently, Bowman said MLB publishes 250 pieces of content on its main digital properties and an additional 1,000 to 1,200 pieces of social media items a day.

"Fans can't watch every game on TV," Bowman said. "Digital was a mandatory thing to do to reach all fans. That's how they want to access it. They want to touch it every day. When we launched digital it wasn't the main priority, and now it's much more part of our strategy."

Despite the successes, baseball does face some glaring issues. Some publishers admitted that the game is no longer in the top three sports on their site, and even SB Nation said it comes in fourth behind NFL,college football and combat sports. The NBA often threatens its position, depending on the time of the year.

Everyone is cognizant of the challenges the sport faces. In addition to the complaints the game can get dull and drag on—which the league is consciously addressing by attempting to shorten dead time during games—there's 162 games to follow a season. With all that digital content about each game, it can get to be too much.

Lockland said SB Nation started realizing that simplified national coverage like morning roundups focused on the biggest stars and game highlights did better than play-by-play recaps of every game. It saved the in-depth coverage for local team coverage that die-hard fans can seek out, provided by the 34 partner baseball sites it owns (one for each team, one for advanced stats, one for fantasy baseball, and one or the minor leagues).

"SB Nation has the advantage of being both national or regional," he said. "We are local at our roots though. Baseball is a strong regional game that appeals to fans at a team level. It has a highly engaged audience.Young sports fans want to know everything about their local team."

Whistle Sports has also employed this strategy. It reaches 78 million fans across its social media platforms, but Urban said it was finding out that it could tap into niche groups that followed local baseball stars. However, these fans were no longer limited by geography; thanks to digital media they could follow favorite players online instead of having to subscribe to regional newspapers.

"You have a pretty large series of communities you can mine and get acquainted with," he said. "Digital gives you a wider opportunity to enjoy sports."

There's also a lack of a household star like Yankees legend Derek Jeter. Bowman said local team heroes like the Angels' Mike Trout, the Nationals' Bryce Harper and the Cubs' Kris Bryant have the potential to shine on a national stage, but because games are played concurrently it makes it harder for them to stand out.

"Our stars compete against each other," Bowman admitted. "Other sports, there' s only one game on, and everyone watches that."

Instead, MLB is pushing individual talented players through digital initiatives like its daily email blasts, Draft King partnerships and Web video profiles, as well as ESPN Sunday Night Baseball, which features only one game.

And, MLB and MLBAM are open to suggestions from its fans. It's using digital media to get feedback from younger viewers to help them evolve for future generations.

"What's equally important is we pay attention," Bowman said. "If you listen to the fans—and every great company does—it's a great opportunity."