Whether China shares are in a bubble depends on which data bit catches the fancy, but the market has outstripped its fundamentals and is 23 percent overbought, Credit Suisse said.

Its models indicate the market is 23 percent overbought and has potential downside of 15 percent in U.S. dollar terms by year-end.

Credit Suisse attributes the rally to factors including the People's Bank of China injecting liquidity through its easing measures, retail investors re-allocating assets to stocks and away from bank savings, wealth management products and property. Apart from some restrictions on margin trading, the securities regulator also appears to be letting the rally ride, the bank noted. 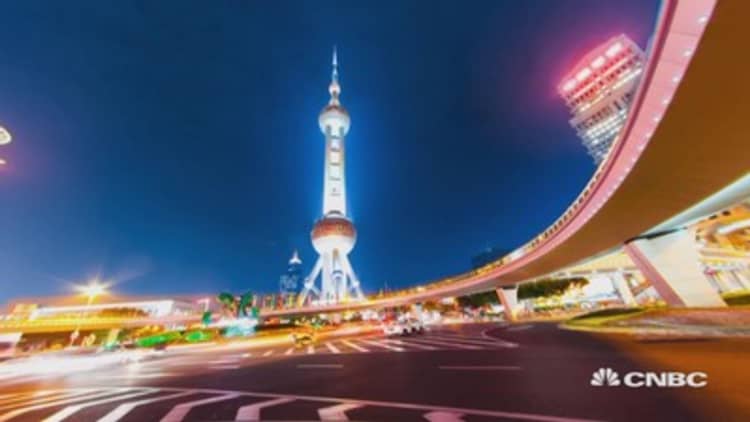 But is it a bubble?

"The evidence for is largely participation and technicals related," the bank said. "The evidence against is principally valuation related."

Supporting the bubble view, new share-trading account openings remain elevated and the markets' average daily trading value has surged to records, it noted. In addition, technical indicators such as deviations from the 200-day moving average and the relative strength index are now comparable to the 2007 A-share bubble, it said.

The Shanghai Composite hit its all-time high of 6124 in October of 2007, as the Global Financial Crisis was brewing.

Read More Why US can rally while Shanghai stocks get smoked

However, while the current relative valuation of the mainland-listed A-shares and Hong Kong-listed H-shares is elevated, it remains far below peaks hit in 2008, Credit Suisse noted. Other metrics, such as earnings yield-to-bond-yield, price-to-earnings and price-to-book, are actually significantly more favorable than their 2007 levels, it noted.

Some are more certain about which indicator will call a bubble.

"Looking at the market cap to GDP (gross domestic product) ratio as a measure of risk in equity markets, it now seems to us that the recent sharp rise in the Chinese market is the first sign of a bubble without the support of fundamentals," Societe Generale said in a note Monday. The ratio grew by 124 percent over the past 12 months, similar to the climb in 2006-2007, it noted.

"The Chinese equity market should therefore be closely monitored this summer," it said.

To be sure, many remain positive on China shares.

Nomura, for one, has a three-year bullish view, although it is "tactically cautious" for the current quarter. It's looking at China's reform efforts, particularly toward opening its capital markets. It expects more long-term institutional funds will enter mainland markets over time. Index creators FTSE and MSCI are heading toward including mainland shares as well, it noted.