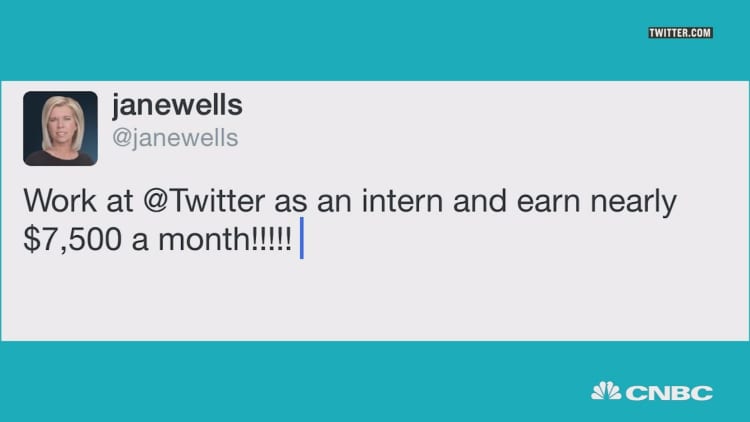 Remember when being an intern meant you ran around getting everyone coffee and handling their dry cleaning, without getting paid, all in the hopes of learning something?

Intern have now become more like apprentices at many firms, and kids these days get compensated. Like, a lot.

Glassdoor has the average wages for company internships, and some have salaries good enough to pay off a chunk of those students loans. Most of the top internships are in tech, the one exception being Exxon Mobil. Interns at the energy giant can earn anywhere from $6,291 to $7,808 a month. And that's in Texas, where you don't have to pay state income taxes Take that, Silicon Valley.

The blog Supercompressor.com took a look at last year's salary numbers on Glassdoor. We then examined this year's figures on Glassdoor and found that all salaries jumped.

Here are the top five best-paying internships. As Supercompressor.com writes: "Step 1: get into tech. Step 2: move to NoCal. Step 3: profit." (It's NorCal, kids, not NoCal. LA may be SoCal, but SF is NorCal. Learn that before Step 2.)

You'll really "like" Facebook's average monthly salaries ranging from $6,667-$6,839 FOR INTERNS, according to Glassdoor. Matching the great pay is a brand new state of the art headquarters which CNBC visited in May. "What really distinguishes the building is its 9-acre green roof, with a half-mile walking loop, 400 full-grown trees, plus whiteboards, WiFi, and plenty of places to sit, so employees can work al fresco," writes reporter Julia Boorstin. It's a place where Chief People Officer Lori Goler (yes, that's her title) said, "No one pays attention to how much someone is working or isn't working. The more efficiently you can deliver results, the better. The roof gives you some head space."

Here monthly intern salaries edge close to $7,000. Plus, free yoga! One intern who successfully landed a gig at LinkedIn wrote on Glassdoor that the interview process covered a lot of territory, "from doing some scripting in Python to how to scale an application to data center sizes." Better brush up on your Python skills.

Not only do you get paid more than most other tech companies at Twitter--monthly intern salaries average $7,475—but you also work in San Francisco instead of Silicon Valley. Better restaurants and ambience. Glassdoor quotes one Twitter intern reviewer: "You will ship code used in production, you can have a say in virtually all company decisions, you will be generously compensated, you will learn a ton," a review which would not fit in a tweet.

The computer software and data analysis company fell to second place in 2015 from first for interns last year. Still, console yourself with monthly pay which ranges from around $7,700 to almost $8,000, according to Glassdoor. "Very few people are there just for the money," wrote one support engineer intern. Really? Well, as Supercompressor.com points out, maybe they're also there for the three chef-prepared meals a day, organized sports leagues and complimentary bike with helmet.

This cloud computing company pays sky-high intern salaries, with top pay of $8,154 a month. A MONTH. That's almost $98,000 if you managed to work your internship into a full-time job.

"Fantastic, writes one intern on Glassdoor. "Great culture, great atmosphere, great pay." And if it all gets too stressful, VMware also has "relaxation rooms" and free snacks.

But it's not all a paradise. Another intern added, "Specific for interns, VMware provides housing, but unless you are a Ph.D. student you'll likely end up in the wasteland of north San Jose, which is about an hour commute one way." Well, eat enough free snacks and nap in the relaxation room, and who needs to go home?