Why Greece should vote 'No!'

Sunday, Greeks should vote "No!"

Hellenic voters are being asked whether they accept the terms offered by the European Union, European Central Bank and International Monetary Fund to extend the bailout for Athens' troubled finances or give Prime Minister Alexis Tsipras a mandate to insist on a better deal. 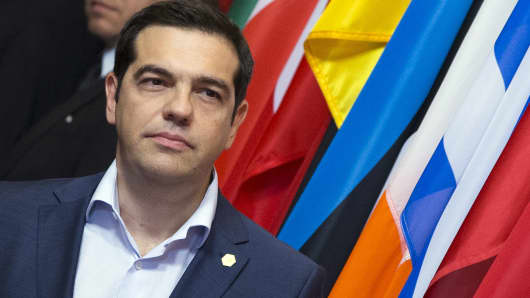 Those conditions include more cuts in government-supported pensions, higher taxes and labor-market reforms other European governments' are often not inclined to accept in the conduct of their own affairs.

Urging a "Yes" vote, European leaders and their supporters in private institutions claim more austerity would reinvigorate the Greek economy and permit Greeks to keep the euro as their currency, but such claims simply contradict the facts.

Greece's debt-to-GDP ratio has soared to 180 percent from 130 percent of GDP, and that is an impossible burden to repay.

The only solution is for Greece to replace existing bonds with securities having longer maturities and paying lower interest rates, and with reduced face value — essentially, a haircut for creditors.

According to my conservative estimate, European governments, either directly or through EU institutions, hold about 100 billion euros ($111 billion) of Greece's foreign debt, and Merkel flat out refuses to entertain German taxpayers taking losses.

Yet, neither Germany's finance ministry, nor any other European government or competent private institution, has tabled a credible analysis demonstrating how more austerity and labor-market reforms (read more layoffs and wage cuts) will instigate growth and not result in even bigger losses for bondholders down the road.

Another round of austerity would only further pummel the Greek economy, and impose economic deprivation that European leaders should be ashamed to engineer.

Read MoreEurope warns of consequences of a 'no' vote

The euro has great appeal as a symbol of European unity—one Greeks are reluctant to abandon despite the pain and peril acceding to the bailout terms.

By voting "No," Greeks would provide Tsipras with leverage he does not now have to negotiate debt relief and more realistic economic policies. 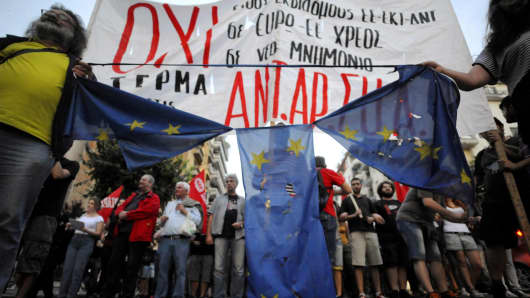 Alexandros Avramidis | Reuters
Anti-EU protesters hold a burned and torn European Union flag during a protest at the northern city of Thessaloniki, Greece July 1, 2015. A defiant Prime Minister Alexis Tsipras urged Greeks on Wednesday to reject an international bailout deal, wrecking any prospect of repairing broken relations with EU partners before a referendum on Sunday that may decide Greece's future in Europe.

Athens need not spend more but relieved of some debt, it could invest, for example, in infrastructure to put the unemployed back to work and rebuild an economy pummeled by eight years of financial crisis and hair shirt bailout terms. And that could potentially allow Greece to stay in the euro.

If European governments balked and refused to face the facts, Greece would then be forced to abandon the euro, issue its own currency and remark the debt held by the Troika and private creditors in drachma.

Reintroducing the drachma would impose losses on both creditors and citizens, because Greek bonds and domestic bank accounts would fall in value as the new currency depreciated on foreign-exchange markets to balance Greece's foreign receipts and payments.

Critics argue such moves would impose too much pain as the rising cost of imports would cause terrible inflation. However, the Greeks have a limited import sector — Greece produces much more of what it consumes than most small nations and its export sector is dominated by shipping, petroleum refining and tourism which would continue to generate lots of receipts in dollars and euros.

Much would depend on the terms of Greece's exit from the euro. If it were permitted to continue tariff-free access to EU markets, Greece would attract a lot of foreign investment. That would limit drachma depreciation and the losses taken by Greek creditors.

One thing is certain: Voting "No" offers Greeks some prospects for better solutions, whereas voting "Yes" guarantees penury.

Commentary by Peter Morici, an economist and business professor at the University of Maryland, and a national columnist. Follow him on Twitter @pmorici1.