When the Supreme Court announced its 5-4 decision striking down bans on same-sex marriage nationwide on Friday, some religious leaders wanted everyone to believe that the justices in the majority were acting contrary to the dictates of traditional religion.

That is simply not true. 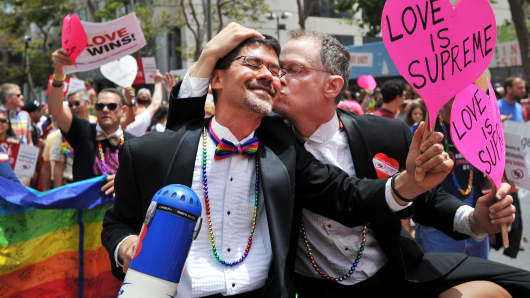 Some groups are claiming to act under the guise of faith in advocating discrimination. "I think there are many secular progressives who assume many religious groups will simply get over our understanding of marriage as a result of a cultural change and that's not going to happen," said Russell Moore, president of the Ethics & Religious Liberty Commission.

But, in fact, you don't have to be a "secular progressive" to see that the Supreme Court made the right decision. You just have to understand traditional religious teachings.

The first chapter of the Book of Genesis reads: "God said: Let us make human beings in our image, after our likeness… So God created human beings in the divine image, creating them in the image of God."

These verses compel us to extend and recognize the same rights to everyone in our community. Those verses make no distinction based on sexual orientation, rather, they embrace everyone, including individuals who identify as straight, gay, lesbian, or transgender. So, too, the Biblical verse, "Justice, justice shall you pursue" teaches us that we have a responsibility to seek justice for all.

And yet, far too often, religious groups have done everything in their power to oppose same-sex marriage.

The same cannot be said of Reform Jews or their rabbis. We have long been part of the struggle for gay rights, and that includes advocacy for marriage equality. As far back as 1977, our organization, the Central Conference for American Rabbis (CCAR), called for an end to discrimination and to further the civil rights and civil liberties for all peoples regardless of sexual orientation. In 1996, the CCAR endorsed a resolution supporting the right of gay and lesbian couples to share fully and equally in the rights of civil marriage. The resolution, apart from repeating the call for full civil rights for homosexuals, also called for complete civil marriage equality and opposed any attempt to amend the U.S. Constitution to facilitate discrimination against homosexuals and their families.

In 2000, CCAR resolved that, "the relationship of a Jewish, same-gender couple is worthy of affirmation through appropriate Jewish ritual" and called for support of colleagues who officiate at "rituals of union for same-gender couples" as well as those who do not. We were the first major group of North American clergy, as an organization, to give its support to those in its ranks to perform same-gender marriage ceremonies. This was particularly significant, given that we are the oldest and largest rabbinical organization on the continent.

We have not ceased our efforts to realize equality for members of the LGBT community. Just this past March, the CCAR rabbinic membership elected and installed our first openly gay president, Rabbi Denise Eger.

All of this illustrates that faith in God and a commitment to equality for the LGBT community are not incompatible. On the contrary. It is precisely our belief in God's insistence on harmony among humankind requires us to embrace our brothers and sisters as equals, regardless of sexual orientation.

That struggle for equality goes on. In many states, members of the LGBT community are still at risk of losing their jobs for their sexual orientation, lack protection from physical violence, or are denied access to essential components of companionship such as rights to hospital visits with ill spouses.

In these fights, too, Reform rabbis will be on the side of those who struggle for equality, as we have long been. Our faith demands nothing less of us.

Commentary by Rabbi Steven A. Fox and Rabbi Hara Person. Rabbi Fox is the CEO of the Central Conference of American Rabbis (CCAR), the rabbinic leadership organization of Reform Judaism in North America and worldwide. Rabbi Person is the publisher and director of the CCAR Press, where she works with CCAR leadership and members to produce books and other publications for rabbis, congregations, and the Jewish community.