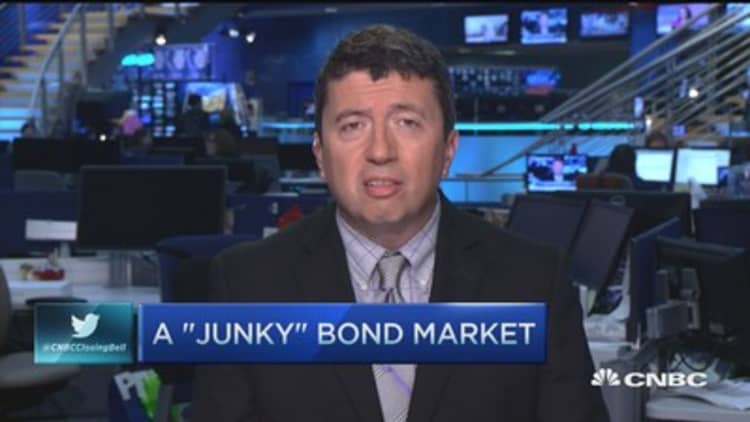 The bottom of the corporate debt barrel is getting more crowded.

The worst of the worst when it comes to bond issuance, or those Moody's Investors Service rates as "B3 negative" and lower, saw their rolls swell to a five-year high in June, the ratings agency said this week.

For the first time since July 2010, that group of at-risk issuers numbered more than 200. The 206 companies represented a 12 percent gain just over the previous quarter and a 24 percent surge from a year ago.

In plain terms, the gains in the list mean credit quality is worsening. But that only tells part of the story.

On the bright side, the total number of companies on the junkiest of the junk list remains well under the 2009 financial crisis high of 283. The dark side, though, is ominous: The riskiest part of that subgroup group, the B1 issuers and lower, total 71 percent of the junk universe compared with 58 percent in 2009.

"That's problematic, because at some point the market will turn," Moody's senior vice president Dave Keisman said in a phone interview. "Suddenly, we could have bad stuff happening much more quickly than the last crisis."

Another point to consider: Companies routinely migrate off the worst-of-the-worst list, and hopefully for the right reasons, primarily ratings upgrades. However, in the latest cycle, most left for the wrong reasons: Bankruptcy knocked half the 24 companies that left, while 17 percent withdrew offerings. Just one-third of the group had upgrades.

Keisman, though, said the trend of more companies joining the B3-and-under list is not cause for alarm, at least not yet.

However, the debt picture is going to get cloudier in the months and years ahead. Companies have thrived off the low-interest environment that has come thanks to the Federal Reserve's ultra-easy monetary policy since the crisis.

The Fed, though, is preparing to begin normalizing policy, with at least one hike possible this year and multiple increases expected in 2016. Borderline companies that have existed off cheap debt, then, face a less certain environment.

Some companies are preparing for the road ahead rather than trying to duck in before the rate increases start.

High-yield debt issuance declined 15 percent in the second quarter on an annualized basis, falling from $107.4 billion in the same period in 2014 to $91.1 billion, according to Thomson Reuters.

"Risks continue to build for U.S. high yield and we caution investors to not grow complacent in the face of what has been generally remarkable stability in the asset class," Michael Contopoulos, high-yield credit strategist at Bank of America Merrill Lynch, said in a recent note to clients. "Not only do too many macro headwinds exist to create a compelling story for high yield, but fundamentals are the weakest they have been since the recession—likely creating an environment where looking for a reason to sell becomes easy."