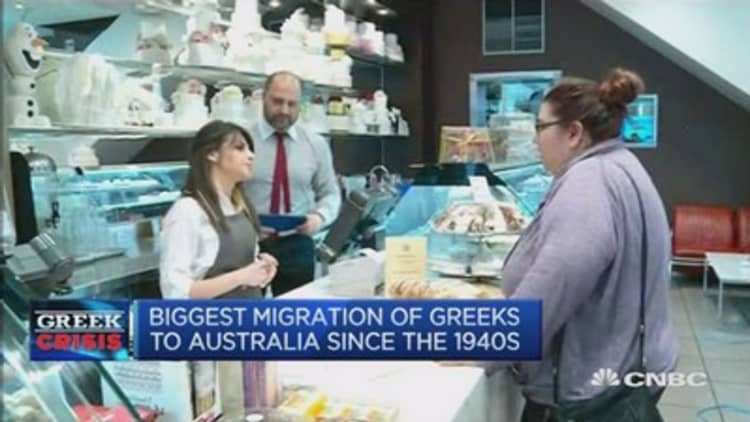 As the debt crisis escalates, Australia is experiencing its biggest influx of Greek migrants since the boom post World War II.

The twaso countries have long had a close affinity, with more than 300,000 moving to Australia since the 1940s. Melbourne now boasts the world's largest Greek population outside of Greece.

"Over the last two years, we've seen 10,000-15,000 people with Australian citizenship, that have lived in Greece for a long time have migrated back to Melbourne. It's a recent phenomenon," says Bill Papastergiadis, the president of Greek Orthodox Community of Melbourne. "For the last 40 years, migration has been one way and that's been from Australia to Greece. The last two years have been an aberration and it's solely due to the economic crisis."

It's not only dual-nationals arriving in Australia, with several thousand solely Greek nationals also making the trip, as prospects at home dry up and Greeks become increasingly worried about the fraying social fabric.

Tasos Keremezis is one of those who made the trip.

Working as a café manager in Melbourne's Greek neighborhood of Oakleigh, Keremezis say his decision to move to Melbourne, and leave his three children back in Greece was a simple one.

"Everything started back in 2011, when things started going wrong in Greece.

I took the opportunity to visit Melbourne in 2013 and since the economic conditions and the financial conditions were good enough here, I decided to move here for good," Keremezis, who was a small business manager at a bank in Greece before immigrating as well as operating a café there with his wife, told CNBC.

But finding a job and relocating half way around the world can be a difficult step for many Greeks.

"It is hard to get a job here, not easy like once upon a time when people arrived here from Europe in the 1940s," Keremezis says. "However, there's something I would recommend to anyone who wants to come to Melbourne is to be very well educated and be well researched, so you can find a job quickly."

Nick Mylonas, President of the Hellenic Australia Chamber of Commerce, says many people arriving in Melbourne from Greece have to be prepared to take a backward step when it comes to employment prospects.

"The people who are finding it challenging are the people that don't have Australian citizenship and we have been lobbying government over the last few years to come up with a working visa opportunity," Mylonas tells CNBC.

But while finding work may take those Greeks many years, Papastergiadis, the Greek Orthodox Community of Melbourne president, said new arrivals are not unhappy.

"For the first time for many years, after five years of austerity in Greece, they've got stable employment and a stable cheque, where they can put food on the table and that's been the primary concern for most Greeks," Papastergiadis said.

Read MoreThis market could heat up as Buffett enters

On their home country's surprise referendum decision Sunday to reject bailout proposals, community bodies in Melbourne say they were shocked by the resounding No vote, but understand why the Greek people rejected further austerity.

"We're very proud of the changes we've seen from the Greek nationals. We anticipate a lot more work from the government to make sure they stay in the EU," Myolnas, president of the Hellenic Australia Chamber of Commerce, said.

But even if Greece manages to pull its nose up out of the crisis, its nationals may not want to return.

"Australia is giving me the opportunity to create a new career and if I can stay I will," immigrant Keremezis said.