It's encouraging to see a renewed push for criminal-justice reform from President Obama. This week, he commuted the sentences of 46 people convicted of drug offenses, delivered a speech to the National Association for the Advancement of Colored People (NAACP), and plans to visit a federal prison.

As the president continues to work on reform, it will be critical that he fully embraces "fair chance" hiring — a policy designed to ensure that formerly incarcerated people and others with records are not unfairly shut out of employment. The need for this policy is pressing, and the clock is running out on President Obama's chance to lead on this uniquely bipartisan issue, which unites groups as diverse as the American Civil Liberties Union (ACLU) and the Koch Brothers. 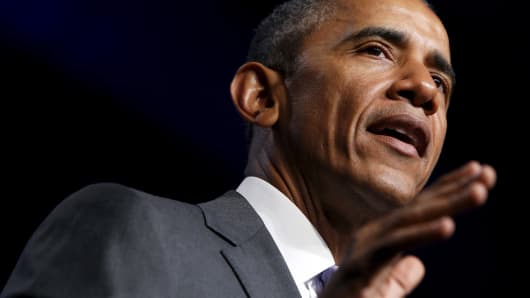 Fair-chance hiring has strong momentum nationwide. Oregon just became the 18th state to adopt a policy, and more than 100 cities and counties (most recently New York) have done so as well — but calls for a federal policy have so far gone unheeded.

Read MoreBernard Kerik: Prison is like 'dying with your eyes open'

It's been more than a year since the administration's "My Brother's Keeper" Task Force urged reforms to help the formerly incarcerated and people with records rejoin the workforce. Since then, the nation has been challenged to confront the racial injustice of the deaths of boys and men of color in Ferguson, Staten Island, Cleveland, and Baltimore at the hands of police. The anger spilling over in response to these killings pulled back the veil, once again, on the dire economic circumstances confronting communities of color. Combined with decades of over-criminalization, the result is a vicious cycle of deepening desperation. It's led to urgent calls not only to reform police practices but to invest in jobs and expand economic opportunity. Fair-chance hiring is a necessary part of the solution.

Over the past year, an impressive number of states and localities have moved forward with their own fair-chance hiring policies. Meanwhile, the White House remains in exploratory mode on the issue, failing to leverage the federal government's resources to become a model employer of people who struggle against significant odds to find work because of the stigma of a record.

Almost one in three adults — 70 million people — in the United States has an arrest or conviction record that will show up on a routine criminal background check for employment. This creates a serious barrier to employment for millions of workers.

As the nation's largest employer, the federal government could set a far-reaching example for all employers by ensuring that federal agencies and contractors adhere to a federal fair-chance hiring policy, which the administration could adopt via the president's executive authority.

What does a fair-chance hiring policy look like? It starts with "banning the box" on employment applications that ask whether an applicant has been convicted of a crime so that all candidates can be judged first on their qualifications, not on a past mistake. It also means that any background-check process must take into the account the age of the offense, its relationship to the specific job, and evidence of rehabilitation and other compelling circumstances. The need to weigh these factors is nothing new — it's required by our nation's civil rights laws — but far too many employers simply toss out any and all applicants who put a check the conviction box.

Some of the nation's largest private employers — Walmart, Target, and Bed Bath & Beyond — are already on board with fair-chance hiring. Even Koch Industries has banned the box, removing the question about convictions from their initial job applications. Small businesses throughout the country also have spoken out on the need for fair-chance policies.

A fair-chance policy that applies to federal agencies and contractors will make official for the federal government what is already a growing practice that is being embraced across the political spectrum.

Perhaps most importantly, President Obama has an opportunity through fair-chance hiring to make a meaningful difference to the economic outlook of communities of color who are disproportionately affected by mass incarceration.

During his NAACP speech on Tuesday, the president said, "Let's follow the growing number of our states, and cities, and private companies who've decided to ban the box on job applications. . . ."

Yes, it's time to make the pledge of the My Brother's Keeper Task Force a reality — and long past time to redress the injuries inflicted on communities of color by decades of myopic criminal- justice policies. Following the lead of scores of states and cities and affirmatively extending fair-hiring policies to federal agency and contractor employment will enable President Obama to transform the promise of economic opportunity and security through work into reality for millions of men, women, and young people in communities shattered by mass incarceration.

The clock's ticking. The time to act is now. We urge the president to do so.