A warning on doing business in Cuba

The restoration of diplomatic relations between the U.S. and Cuba is sure to bring new opportunities for U.S. businesses seeking to gain a foothold in a market of more than 11 million potential consumers who have had little access to American products and services for more than 50 years. The opportunities are not unlimited, however, and they do not come without risks, particularly those related to corrupt payments to government officials prohibited under the federal Foreign Corrupt Practices Act. 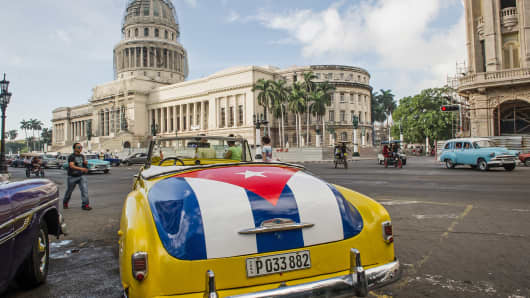 Yamil Lage | AFP | Getty Images
A vintage car with a Cuban flag paint job is parked near the National Capitol Building in Havana on Jan. 7, 2015.

While the regulatory changes that have followed the December 2014 White House announcement of a rapprochement may not seem as spectacular as initially believed, there are significant openings hidden in those regulations that are likely to expand as time goes on. The Obama administration appears to be taking the same measured approach to removing the sanctions as it has to tightening the Ukraine sanctions, that is, a phased approach to test the reaction on the other side (in this case, the Cuban government) and the reaction of Congress and the American people. The administration appears to be getting positive reactions; therefore we should look for a further loosening of restrictions in the months to come.

Regardless of how quickly the next round of changes comes, it is important to keep in mind that doing business in Cuba will involve special risks inherent in a state-controlled economy. Because the state runs virtually all significant business enterprises, it raises the possibility that any payment of a bribe related to not only traditional government functions such as permitting, licensing, and government contracting but also business deals that in other places would be strictly between private parties will be a violation of the FCPA. That law makes it illegal to pay an official of a foreign government, or any "instrumentality" thereof, to obtain a business benefit. It also requires U.S. public companies to keep accurate books and records and adopt an adequate system of financial and accounting controls. Both the Justice Department and the Securities and Exchange Commission enforce these requirements.

In a place where state workers earn an average of only $20 per month, finding additional sources of income becomes essential to survival. This creates the foundation for government bureaucrats, business managers, and even high-level government officials to become accustomed to boosting their income through an illegal use of their position. Transparency International, a non-governmental organization that monitors international corporate and political corruption, has given the country a score of 46 (just below Ghana and above Oman) on an index where 0 is most corrupt and 100 is transparent.

Although Cuba has not experienced the type of drug-trade related corruption that besets many other Latin American and Caribbean nations, reports indicate that it is burdened by widespread graft related to trade and commerce. As U.S. sanctions open up beyond the current phase where most allowable transactions must be with Cuban private sector enterprises, to do business in Cuba, foreign companies likely will need to partner with the government, which leads to a heightened risk that illegal payments will be solicited. State ownership of business, coupled with tight controls on the media and little compliance oversight, has also led to a lack of transparency and accountability. In this type of environment, a bribe paid to an official to obtain a commercial benefit may be less likely to be discovered and disclosed but is no less illegal, at least under U.S. law.

The good news on the anti-corruption front is that President Raul Castro, with an eye toward liberalizing the Cuban economy, has initiated a crack-down on public corruption since taking over from his brother Fidel in 2008. And those efforts have produced some high profile results. In 2011, several senior executives at Etecsa, a state-run telecom company, were arrested on corruption charges and its president and most of its vice presidents suspended.

That same year, 14 Cuban public officials and businessmen along with a Chilean executive, all employed by either the state-owned Cubana de Aviacion airline or Sol Y Son, a tourism company jointly owned by the Cuban government and Chilean investors, were convicted for receiving or paying bribes.

This past October, 17 Cuban government officials, including the vice minister of the sugar ministry, executives of joint venture partners, and a Canadian businessman were sentenced to as many as 20 years in prison for their role in a scheme to steer lucrative contracts to a Canadian transportation equipment company.

There is a question as to whether these high-profile cases are having a positive effect on the "culture." Critics contend that charges are often brought to eliminate competitors of a favored business concern. But there is no question that the threat of criminal penalties — in Cuba and in the United States — exists for those who are not prudent.

U.S. businesses hoping to enter the Cuban market must understand that the state-owned businesses with which they will likely have to interact will be considered to be "instrumentalities" of the Cuban government. Not only do they have to exercise great care to avoid paying off public officials, they must also steer clear of providing money or perks to business partners that could be construed as bribes.

Although the FCPA itself does not define the full contours of who qualifies as a foreign official, the widely-publicized 2014 decision from the Eleventh Circuit Court of Appeals in U.S. v. Esquenazi makes the prohibition on corrupt payments to "instrumentalities" of foreign governments applicable to officials of state-owned businesses. That case, which involved bribes from two Miami businessmen to employees of a state-owned telecom company in Haiti, is the first appellate court decision to uphold the Justice Department's long-held position that the FCPA reaches companies under state ownership and control. It should be seen as a clear warning for companies looking to take advantage of new opportunities in Cuba.

Companies should implement vigorous FCPA compliance programs with training designed to educate employees about the special challenges of dealing with state-controlled businesses – even where they do not fulfill a function traditionally performed by government agencies. Those programs should include tight controls on recording and reporting payments to business partners, government agencies, and third-party vendors and intermediaries. (Companies cannot shield themselves by having third parties pay their bribes.)

There should be close oversight of interactions with Cuban officials, including, of course, managers of state-owned business partners. An effective compliance program must also include due diligence at the front end of a deal and regular audits during and after the execution of a contract.

Opening the door to trade with Cuba should provide U.S. businesses with new and profitable opportunities. But it also presents significant risks. Managing those opportunities by watching for and mitigating FCPA risk is the best way to keep the DOJ and the SEC from derailing efforts to establish a beachhead in Cuba.

Commentary by Timothy D. Belevetz and Ronald A. Oleynik. Belevetz is a partner in Holland & Knight's National White Collar Defense and Investigations practice and a former federal prosecutor and U.S. Securities and Exchange Commission attorney. Ronald A. Oleynik chairs Holland & Knight's International Trade Regulatory practice and is a member of the firm's Cuba Action Team.