The only way New England Patriots quarterback Tom Brady will win his appeal of a four-game suspension over "deflategate" is if he can show that the process through which he was suspended was unfair. 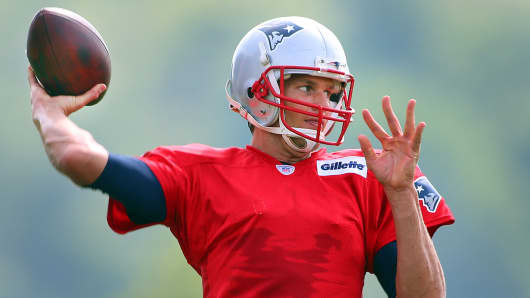 It is possible that the judge could believe that Brady cheated, yet still overturn his suspension because the hearing process was unfair. By contrast, the judge could conclude that Brady didn't cheat, yet still uphold the suspension because the process was fair. At this stage, it doesn't matter what Brady knew about the improper deflation of footballs used in the game – or even whether the balls were improperly deflated at all. The focus now is on the conduct of the league and the commissioner, not the conduct of Tom Brady.

Brady challenges the commissioner's ruling on four grounds: 1) The only rule applicable to players that addressed the alleged misconduct was punishable only by a fine, not a suspension; 2) It was unfair for Brady to be punished when the league had no collection and testing procedures for determining changes in football pressure; 3) It was unfair for Commissioner Goodell to delegate his initial disciplinary authority to NFL Executive Vice President Troy Vincent and to deprive Brady of evidence he wanted to use at the hearing before the commissioner; 4) It was unfair for Goodell to conduct the appeal hearing himself rather than assigning the appeal to an independent arbitrator, as he has in other high-profile cases. The commissioner had publicly praised the report that he was called on to evaluate in the appeal. That, says the quarterback and his union, made Roger Goodell unfairly biased toward Tom Brady.

With New England's season opener against the Steelers set for September 10, Brady and his union are asking the judge to either block the suspension from taking effect until the judge can rule on the merits or to decide the appeal before September 4, when the team begins its final preparations for the opening game. The judge could well grant one or the other of these requests. As others have noted, it would not be much of a victory if Brady won his appeal only after he served his four-game suspension, even though he would get back pay if he prevails. It is the competitive consequences of Brady's absence from the team that would mean the most to him and his team -- with all due respect to his back-up, Jimmy Garoppolo. Those are competitive consequences that even a powerful federal judge cannot remedy.

The stakes are all-or-nothing. Either Brady will get a four-game suspension or he will get no punishment.

Read MoreTom Brady: I did not alter footballs

But where, as a former Cabinet officer once asked after being acquitted of serious federal charges, would Tom Brady go to get his reputation back?

Commentary by Dan Eaton, a partner with the San Diego law firm of Seltzer Caplan McMahon Vitek where his practice focuses on defending and advising employers. He also is a professor at the San Diego State University College of Business Administration where he teaches classes in business ethics and employment law. Follow him on Twitter @DanEatonlaw.