In the very short term, the dust may be settling on the depreciation of the Chinese currency, the yuan. Over the next six to 12 months, however, concerns remain, including for developing nations that export to China or compete with China in export markets. 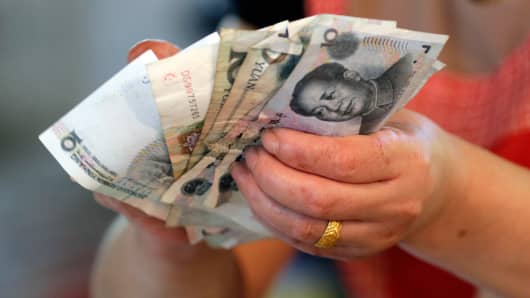 Compared with the period since China became a dominant global economic power, the recent daily moves in the yuan-dollar exchange rate have been extraordinary. The Chinese authorities most likely welcome an adjustment of the currency as the yuan has risen in real terms by 18 percent against the dollar in the last two years and growth has slowed. In addition, a weaker yuan provides an alternative to monetary and fiscal policy, thus adding to policy flexibility. China is also aiming to let the yuan depreciate and appreciate more flexibly in line with market forces to aid inclusion in the International Monetary Fund's special drawing rights currency basket, a key asset in terms of international reserves.

What the depreciation says about China's growth concerns should be a worry for emerging markets that export heavily to China, particularly commodity producers such as Brazil, Russia, South Africa, Indonesia, and Malaysia. A weaker yuan is also a concern for developing nations that compete with China in exporting similar goods and services to similar destinations. Taiwan and South Korea face some of the greatest risks, but Thailand and the Philippines may also be affected and even Mexico may feel the effects.

The situation is probably manageable under our base-case scenario, which is that the yuan gradually weakens further to 6.60 to the U.S. dollar in 12 months' time. However, the relevant countries will face a greater impact in the risk case, whereby the yuan depreciates more sharply, perhaps as a result of even weaker Chinese growth. In the risk case, these nations' currencies may come under renewed pressure against the U.S. dollar. Emerging market companies in countries whose currencies weaken against the U.S. dollar will also find it harder to service U.S. dollar-denominated debts.

If this Chinese risk case materializes, it would also come at a time when emerging markets are suffering from a range of other issues. Since 2013, when the Federal Reserve started scaling back its ultra-loose monetary policy, developing economies and markets have suffered from the U.S. dollar strengthening and expectations of higher U.S. interest rates. Political turmoil and the sharp drop in commodity prices have also weighed on Brazil and Russia. Of the major nations, only India has emerged strongly.

Granted, a sharper-than-anticipated depreciation in the yuan should act as a deflationary force, especially if accompanied by further China growth jitters. This might lower the future path of U.S. rates and restrain the rise of the U.S. dollar against emerging market currencies. However, this type of depreciation would also most likely result from concerns about China that would not be favorable for developing countries overall.

For investors in advanced economies, who typically have lower exposure to emerging markets, this may not seem like a dominant investment concern. We have already addressed worries over emerging markets within our portfolios by remaining underweight emerging market equities compared with developed world stock markets, especially the euro zone and Japan. But on a macro level, China is still the world's second largest economy, and the developing world matters for global growth and hence for global markets. Wherever investors are based, the yuan and its effect on emerging markets are noteworthy issues to watch.

Read MoreChina market down, not out: UBS