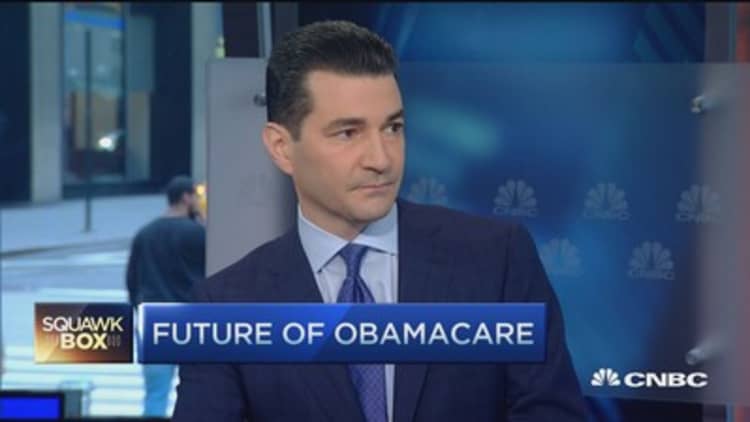 Obamacare's looming "Cadillac tax" on high-cost health plans threatens to hit 1 in 4 U.S. employers when it takes effect in 2018—and will impact 42 percent of all employers by a decade later, according to a new analysis.(Tweet This)

And many of those employers will be subject to the heavy Obamacare tax because they offer popular health-care flexible spending accounts to workers, which, ironically, are designed to reduce the income tax burden to those employees.

As a result, the co-author of the analysis expects the health FSAs to start being phased out and "largely disappearing" over time by companies looking for reduce their exposure to the Cadillac tax.

Over time, the expectation is virtually every employer will be subject to the Cadillac tax.
Larry Levitt
senior vice president, Kaiser Family Foundation

That may come as a surprise to the millions of Americans who make pretax contributions from their paycheck into health FSAs and then use that tax-free money to pay for out-of-pocket medical expenses, such as office visit copays, and other eligible costs not covered by their insurance plans. Up to $2,550 can be put into a health FSA in 2015.

Health FSA fans will be in for a further rude surprise as their employers attempt to reduce the effect of the tax on their bottom line through other strategies, such as increasing deductible limits, cutting the number of health plans available to workers, offering narrower networks of doctors and hospitals, and eliminating covered services.

"One of the effects [of the tax] will likely be cutbacks in benefits," Levitt said. "The breadth of effects from this tax grow significantly over time, and eventually the vast majority of workers will find themselves with changes in their health benefits as [a result] of this tax."

Kaiser's analysis also highlights the fact that the Cadillac tax costs can be different for different employees within the same company, even if they are enrolled in the same health plan, further complicating companies' compliance with the law. Employees who use FSAs will be more apt to trigger the tax, and more apt to generate a higher tax amount, than employees who don't use FSAs.

While not all eligible workers use FSAs, those that do often find them useful for reducing the cost of their out-of-pocket medical expenses, given their use of pre-tax dollars.

A spokesman for the human resources consulting firm Aon Hewitt noted that "almost all large employers offer health-care FSAs," and that participation in them among employees ranges from 17 to 20 percent.

Benefits management giant ADP said that the average health FSA annual election in 2015 for the 1.5 million such accounts it manages was $1,300, up $100 from the average in 2013. A spokesman said that the uptick is likely the result of a rule change that allows participants to carry over up to $500 into the next year, as opposed to forfeiting that unused money.

In contrast, the Cadillac tax is a particularly unpopular, yet key element of the Affordable Care Act, and one that is drawing renewed calls for its demise.

"It's a tax that deficit hawks and economists love, but every other interest group hates," Levitt said.

The tax is designed to generate revenue—an estimated $87 billion over a decade—to help fund the federal government's expansion of health insurance coverage to more Americans through subsidies to customers of Obamacare plans sold on government exchanges, and through expanded Medicaid benefits.

It is "one of the strongest cost-containing measures in the ACA," Levitt said.

How the tax works

In 2018, employers whose health plans exceed certain cost thresholds will be subject to a 40 percent tax on the amount over those limits. That year, the cost thresholds are $10,200 for plans covering only an individual, and $27,500 for plans covering more than just the worker. The tax is not deductible by the employer as a business expense, as health plan costs normally are.

Although the thresholds increase over time, Kasier's analysis and others project that a rising number of employers will find themselves subject to the tax after 2018 because the price of insurance premiums are expected to rise faster than the threshold maximums. Kaiser notes that "19 percent of employers already in 2015 have a plan that would exceed the [Cadillac tax] threshold when FSA offers are considered."

The total premiums paid for a health plan, both the employer's share and the worker's contribution, are used to calculate the cost of the plan, as is what an employer contributes to health savings accounts, which are another tax advantaged way to save to help pay for medical costs.

FSAs can dramatically raise a company's exposure to the Cadillac tax.

Kaiser also noted that if insurance premiums rise faster than 5 percent annually, the number of employers affected by the Cadillac tax will be markedly higher much sooner.

Larger employers, those with 200 or more workers, will hit by the tax more quickly than smaller ones, Kaiser's analysis found, "because large firms ... are much more likely than smaller firms to offer an FSA."

The analysis also says, "As we noted ... not all employees offered an FSA option will make the maximum contribution, and some will make no contribution, which means that the threshold will be reached for some employees and not for others with the same plan choices."

Although 2018 may seem long off, "employers are very focused on" the tax and preparing for its introduction, and "the political pressure to make changes to this tax are already there, in spades," Levitt said.

Earlier this month, U.S. Chamber of Commerce President and CEO Thomas Donahue, in an commentary that ran in several media outlets, attacked the tax, and said, "It may be the law of the land, but if this provision is allowed to stand, it will only push costs higher—and it will steadily unravel employer-sponsored coverage, the backbone of our system."

"Ultimately, it's the employees who will ultimately pay—either through lost coverage options or higher costs," Donohue wrote.

About your health plan: No Big Changes—for now

On Friday, a coalition of private and public employers and workers called "Alliance to Fight the 40" wrote members of Congress urging repeal of the Cadillac tax.

"The stated goal of health reform was to build upon employer-based coverage and lower costs," the alliance wrote. "This tax will do neither. Instead, it will erode an important source of quality coverage and compel a shift of costs to workers—something neither employers, nor employees want to see happen."

The letter, which includes links to a number of studies analyzing the impact from the tax, noted that a bipartisan group of members of the House of Representatives has sponsored a bill that would repeal it.

"We urge you to join their effort," the alliance wrote. "The tax must be repealed. If Congress waits, it will be too late."

Levitt said that if the tax were to be repealed, which is by no means certain to happen given President Barack Obama's veto pen, "Congress either has to find other revenues to replace what this tax produces, or agree to increase the deficit."

A spokeswoman for the Treasury Department said, in response to the Kaiser study, that the Cadillac tax when it kicks in "will only affect the highest-cost plans, representing a small fraction of workers," according to department estimates.

"While we have not closely reviewed today's study, it is important to note that it counts an entire employer as affected by the tax if the firm has at least one plan that could trigger the tax, even if the vast majority of the firm's workers are enrolled in other plans and even if an overwhelming majority of the particular plan's enrollees would not be affected," the spokesman said. "In addition, it does not account for key protections in the law for firms with older workers or persons in high-risk occupations."

The spokeswoman noted that the ACA adjusts the threshold for the tax based on factors such as age of workers and high-risk professions to ensure that workforces with sicker employees are not penalized.

And she said that economists agree that the tax would help lower the growth of health costs, so repealing the tax would raise costs systemwide, while at the same time increasing the federal deficit by an estimated $87 billion through 2015.

Correction: The Kaiser study found that 16 percent of employers would have at least one health plan hitting the $10,200 Cadillac tax threshold for single-only coverage in 2018 if FSAs weren't considered. A previous version of this story misstated the year.