Almost anything China does these days begs a critique, or at least serious questions. But it is not reasonable to fault the Chinese alone for the current turmoil in global markets. In particular, it makes little sense to point to the precipitous drop in the Shanghai stock market or the comic push-me-pull-you announcements from Chinese leaders—We will intervene; We won't intervene; No, instead we'll blame it all on a Chinese journalist (Beijing's favorite whipping posts). 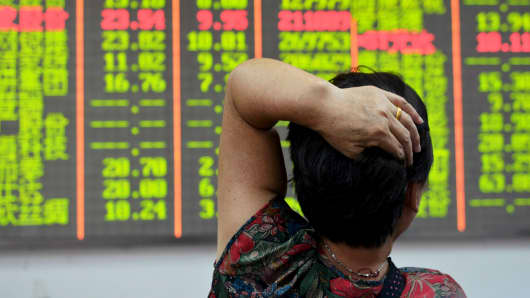 China Daily | Reuters
An investor looks at an electronic board showing stock information in Hangzhou, China.

"Except for the fools who are heavily invested in it, China's stock market has little impact in a global sense," said David Wessel, a senior fellow at the Brookings Institution and director of its Hutchins Center on Fiscal and Monetary Policy.

It's impossible to deny that any tremor in the the world's second-largest economy will send ripples around the globe, not least because global markets have relied on Chinese growth for encouragement since the last economic bubble burst in the U.S. in 2008. Moreover, China's leaders have a knack for unsettling decisions, whether that means loudly staking a claim to little islands previously understood to belong to other countries like Japan, or suddenly announcing a devaluation of their currency, as they did three weeks ago.

Indeed, the latter move came just as economists were beginning to factor in the yuan as one of the few constants in an ever-volatile global economy. "For seven or eight years the one thing the world has been able to count on is Chinese growth and the reliability of the yuan," Wessel points out. "Then all of a sudden, the Chinese go and devalue? Of course markets are going to overreact."

Overreact. Ironically, that is something markets can be counted on to do, because for all the algorithms out there, people move markets—in pork bellies, copper, oil and money, whether in Shanghai, Tokyo, London or New York. And in this case, people had plenty of notice that China's economy, if not faltering, was heading into a momentous structural transition. Since early this year, China's industrial production has dropped steadily from the high 7 percent to 8 percent range the world has come to expect.

Imports of many raw materials, from oil to silicon, have been in steady decline. Not surprisingly, that has brought groans from the countries that export commodities. That is a structural economic trend, not a reflection of the mercurial swings in China's own markets. By the same token, the slump in Japan's Nikkei average is no reason to conclude that China's neighbor and largest trading partner is about to fall off an economic cliff. If anybody fears a China slowdown, it's the Japanese. Yet Japan's underlying economy has been showing steady signs of improvement over the last nine months.

"China is now in a position from which it can continue to make the rest of the world jump."

Far more important than the market hiccups is the fact that China's leaders have begun heeding the call from global economists and entities, like the IMF, to move from an industrial, manufacturing and export-driven model to the consumer-, service-centered economic structure that reflects a country with a vast, quickly growing middle class. That's what happened in the U.S., Japan and Korea.

In China's case, however, the process is considerably more difficult. On one hand, its size and diversity dictate that any change in direction will be sluggish. Moreover, as Richard Bush, director of East Asia Policy at Brookings, points out: "China's leaders do not have a blank slate anymore when it comes to enacting change."

Capitalism with Chinese characteristics has placed considerable power in the hands of a few entitled leaders in both business and regional politics. A culture of corruption has laid deep roots across the country, and although President Xi Jiping has showed a willingness to address the latter, wielding central authority is as difficult as ever in China.

Look at US fundamentals

So if not China, then who do we blame for the market turmoil?

One might begin by looking at the valuations of companies on U.S. exchanges. The S&P Index, according to the Wall Street Journal, has doubled since 2009. Although the U.S. economy may be growing at a steady rate, wages remain relatively stagnant and jobs numbers are still bouncing up and down. Federal Reserve bankers have yet to raise interest rates, which begs a question analysts often have with regard to the opaque Chinese leadership: Does the Fed know something we don't?

Make no mistake: China is now in a position from which it can continue to make the rest of the world jump. Tomorrow's massive military parade marking the end of World War II and the 70th anniversary of Japan's defeat is an example—and an unnecessary one—of a show of power that suggests Beijing might just decide to disrupt security in Asia at any time.

It probably would be a better use of time, however, to pay close attention to what happens at this week's Developed Nations Summit, where the global market turmoil will likely be Topic A.

—By Frank B. Gibney Jr., a former Asia bureau chief for TIME and Newsweek