In August 2013, Jackie Reilly was like any other college student. The 19-year-old had dreams. She had goals. And she was excited to begin her sophomore year at Syracuse University.

A peer advisor and member of Alpha Xi Delta, Jackie was happy to be reunited with her sorority sisters. On her second night back on campus, she and her friends headed to Syracuse's fraternity row for a night of celebrating. At about 1 a.m. she met up with a male classmate who had been messaging her online but whom she had never seen before in person.

With her friends beside her, the two chatted. Then he poured Jackie a drink and handed it to her—and that's the last she remembers before waking up, nine hours later, in a strange room, naked and disoriented. Hovering over her, fully clothed, was the same boy who'd poured her the drink the night before.

Jackie, now a Syracuse senior, will forever question whether she'd been slipped a drug that night. "When I woke up, I didn't feel right. I was drowsy, unable to move," she said. "But the hospital didn't have a date-rape drug test, so I can't prove it." In addition, Jackie said that because she had removed her clothes and showered before seeking medical attention, the evidence was now damaged.

For freshman, the first six weeks of college—between student orientation and Thanksgiving break—are considered the "red zone." The time first-year students are at greatest risk of sexual assault. That is because freshman are in new surroundings, most experiencing independence for the first time. They are new to the campus, which in turn makes them more vulnerable.

According to a new report released Monday by the Association of American Universities, nearly 1 in 4 college women say they are sexually assaulted before they graduate. This is based on the responses of approximately 150,000 students at 27 top universities polled last spring. (Sexual assault is defined as any involuntary sexual act in which a person is coerced, or physically forced to engage in, against their will.)

These numbers are much higher than the 1 in 5 statistic reported in 2014, which prompted the Obama administration to create the White House Task Force to Protect Students from Sexual Assault. Since then there has been a national push to explore the incidence of sexual assault on America's college campuses.

The White House task force's first report, "Not Alone," also found that 3 out of 4 women sexually assaulted are either freshman or sophomores, and 84 percent of the time the perpetrator is another student. In the majority of cases, the victim knows her attacker, whether as an acquaintance, classmate, friend or (ex)-boyfriend.

The report also revealed that, like Jackie, many of the victims are "survivors of 'incapacitated assault': they are sexually abused while drugged, drunk, passed out, or otherwise incapacitated."

Jackie chose not to file charges against her attacker and has never identified him publicly, but she did file a no-contact order. Keeping silent is not unusual: 95 percent of attacks go unreported, according to the American Civil Liberties Union. This is partially due to the social stigma surrounding sexual assault or fear of blame, say experts.

For those cases that are reported, a large number of them simply get swept under the rug by college administrators, a violation of the Jeanne Clery Disclosure of Campus Security Policy and Campus Crime Statistics Act, which requires colleges and universities participating in federal financial aid programs to maintain and disclose campus crime statistics and security information.

But thanks in part to a number of student activists, we may see some sweeping changes. Activists like Columbia University student Emma Sulkowicz, who carried her dorm room mattress all over campus last year to protest the school's failure to expel the young man who she says raped her the first day of her sophomore year. (The student she accused, Paul Nungesser, filed a gender-based harassment and defamation suit against Columbia in April, according to NBC New York.) And the many young men and women who shared their stories of abuse by both their attackers and their schools in the CNN documentary film "The Hunting Ground."

"Sexual violence on college campuses has been a problem for a really long time. What's changed is that it's been elevated to the level of national discussion," said Sarah McMahon, associate director, Center on Violence Against Women & Children, School of Social Work, at Rutgers University. This is partly due, she said, "to the numerous student activists around the country that have protested about how their cases of sexual violence have been mishandled."

Hillary Clinton has just announced her own proposal to combat this crisis. It includes a survivor support network and prevention programs.

According to a 2014 report prepared by the U.S. Senate Subcommittee on Financial & Contracting Oversight at the request of Missouri Democratic Sen. Claire McCaskill, out of a sample of 440 colleges and universities, more than 40 percent of them failed to conduct a single sexual violence investigation in the past five years and more than 10 percent do not have a Title IX coordinator on staff, as required by law. A Title IX coordinator is responsible for coordinating an institution's compliance efforts, including investigations of sexual harassment and sexual violence.

There are 139 colleges being investigated over concern about whether the schools violated Title IX in their handling of sexual violence cases, said the U.S. Department of Education's Office for Civil Rights in an email to CNBC. This is up from 55 cases under investigation in May 2014.

Among those on the hot seat: Harvard, Cornell, Vanderbilt, Johns Hopkins, Occidental College, Stanford and Brown. If these schools are indeed found guilty and refuse to address the problems identified by the OCR, they could lose their federal funding. 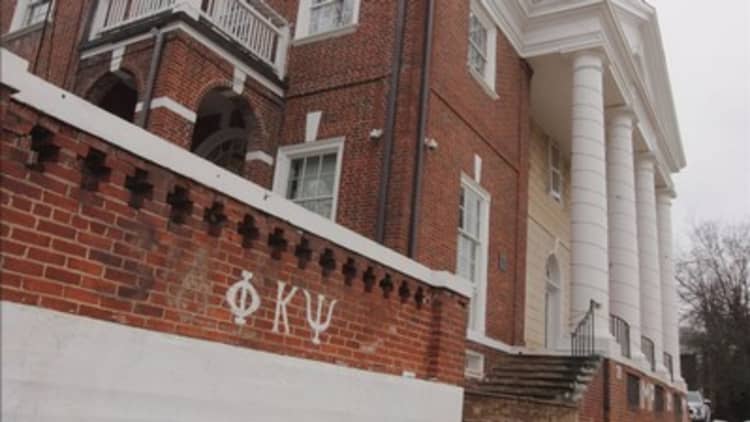 "There is a real obvious conflict of interest" when it comes to reporting sexual crimes on campus, said Sarah Merriman, a spokeswoman for the advocacy group SAFER, Students Active for Ending Rape. "The people who are supposed to be advocating for survivors have been hired by the school and need to keep their jobs." She added that administrators feel that if they acknowledge campus rape, it will ruin their image.

Merriman, a 2012 graduate of Boston University, is herself a survivor, and she understands fully what it's like to shoulder this trauma and have nowhere to turn. "Survivors often have no clear path to follow, and the police can be very callous," she said. "Schools like to pretend that there isn't a rape culture problem and that they are a very caring university."

Merriman spoke of one activist who worked in BU's Center for Gender, Sexuality, and Activism (CGSA) that repeatedly tried to establish a sexual assault prevention program at the university but was met with a wall of bureaucracy and budget issues. Then, in the beginning of 2012, there were reports of sexual attacks by some members of the BU hockey team, she said.

With students looking to the CGSA for guidance, a group of student activists decided once again to approach the BU administration about a rape crisis center, submitting 1,000 signatures from the student body and an exhaustive 20-page proposal, which requested, among other things, bystander intervention training, crisis counselors and prevention specialists. Two months later BU approved it, she said, and in the fall of 2012, the Boston University Sexual Assault Response and Prevention Center opened its doors.

"The university has a comprehensive, professional and supportive response system to reports of rape or sexual assault—an issue we take most seriously," said Boston University spokesperson Colin Riley.

Colleges and universities under fire

With last year's creation of the White House task force and the "It's On Us" campaign—an initiative that asks men and women across America to step off the sidelines and help to stop sexual assault on college campuses—colleges and universities have come under fire to amend their codes of conduct and refine definitions of consent.

Senators and other legislators are passing laws to make campuses safer, such as New York Gov. Andrew Cuomo's "Enough Is Enough" law and California's Bill 967, which requires an "affirmative, unambiguous, and conscious decision by each participant to engage in mutually agreed-upon sexual activity."

And on September 14, Hillary Clinton introduced the issue for the first time on her campaign trail, telling college students at a "Women for Hillary" event in Cedar Falls, Iowa, about her own proposal to combat this crisis, including a comprehensive support network for sexual assault survivors, more focus on disciplinary proceedings for both accusers and the accused and starting sexual violence prevention programs earlier in schools.

Yet even so, there is little hope that the issue will improve anytime soon. "There are some really great policies on the books, but I still don't see any follow-through," said Merriman.

So like Boston University's Merriman and Columbia University's Emma Sulkowicz, courageous students—both male and female—are continuing to speak out, refusing to be silenced until the crisis stops.

After Reilly shared the story of her rape with two of her sorority sisters, Julie Gelb and Caroline Heres, she discovered that they, too, were survivors of sexual assault, incidents that took place outside the Syracuse campus.

Together the girls founded The Girl Code Movement, a college-focused anti-sexual assault organization. Its mission: to teach college women to become empowered bystanders, identifying at-risk women and taking action to stop a rape from happening. They are unwavering in their efforts to teach the importance of bystander intervention, continuously presenting their message to the sororities and fraternities on campus.

"If everyone speaks up in these moments, fewer cases of sexual violence will occur. ... At the time of our assaults, there were witnesses before the rapes took place—witnesses that could have stepped in to make sure we were okay, that we were consenting to the actions put upon us," said the three co-founders in a 2014 blog post.

Out of a sample of 440 colleges and universities, more than 40 percent of them failed to conduct a single sexual violence investigation in the past five years.
U.S. Senate Subcommittee on Financial & Contracting Oversight

Students at Dover-Sherborn Regional High School in Dover, Massachusetts, sign a pledge that they will join in the fight to stop sexual assault on college campuses.
Source: SWEAR

Yet Rutgers' McMahon and SAFER's Merriman firmly believe that education must start long before college.

Through their organization SWEAR—Stand With Everyone Against Rape—four boys from Dover-Sherborn Regional High School in Dover, Massachusetts, are breaking ground, educating teenage boys in high schools on the myths, stereotypes and repercussions of sexual assault.

One of its members, Will Little, was a close friend of Jackie Reilly's, so when he'd learned of her alleged sexual assault, he immediately responded with a call to action. Together with classmates Justin Seymour, Sam Scatchard and Gabe Leeman they stood in front of their fellow students at Dover-Sherborn and revealed the startling statistics about sexual assault on college campuses across America. Afterward the young men asked the male students to sign the SWEAR pledge to take a stand against rape. The assembly was so well received, the SWEAR team has now been invited to give their message to students at other Boston-area schools.

"There's only so much schools can do," said Little. "It's more on the students to be able to stop it. The [administrators] are not going to be at these parties, where it's happening."

This story has been updated to reflect that nearly 1 in 4 women are sexually assaulted before graduation.