What could be better than a Victoria's Secret model wearing a jewel-encrusted bra? Mouawad has the answer: Two.

A super-pricey "fantasy bra" is the showstopper at the U.S. lingerie brand's annual fashion show, where one of the Victoria's Secret "angels" wear the sparkling showpiece down the runway.

Mouawad, a Dubai and Geneva-based luxury jewelry design house that has been making the fantasy bras for Victoria's Secret since 2001, decided last year that one bra was not enough.

"When you come up with something like this, you want to create something that is very special," Jean Nasr, the managing director of Mouawad Singapore, told CNBC on Friday. "We wanted to create something different so we decided instead of making one, why not double the challenge." 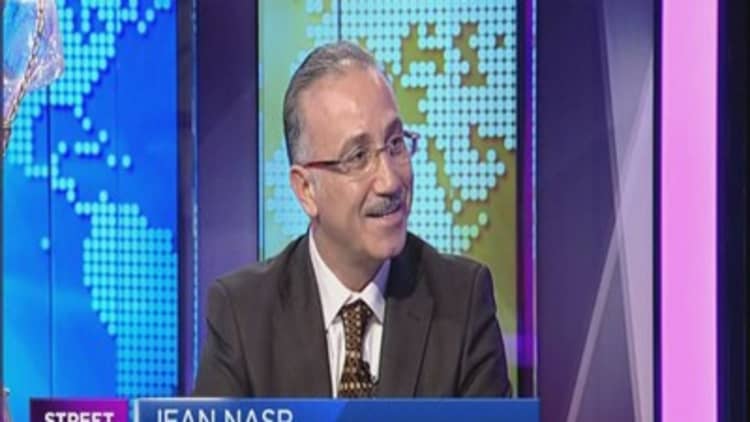 Mouawad's masterpieces - worth $2 million each and worn by models Adriana Lima and Alessandra Ambrosio at 2014's lingerie show - will be on display at the Singapore JewelFest from Oct.9-18.

The bras are studded with more than 16,000 rubies, diamonds and blue sapphires and held together by 18-karat gold chains.

Nasr estimated that 1,380 hours of craftsmanship went into making the bras, as each gem was hand-set.

Only one of the fantasy bras that Mouawad has made has ever found a buyer. But Nasr was tight-lipped about its new owner, only saying the person was from Europe.

The latest pair is not the most valuable Mouawad has ever created: In 2001, former Victoria's Secret model Heidi Klum wore a $12.5 million fantasy bra on the runway. It was made with 1,200 Sri Lankan pink sapphires and a 90-carat emerald-cut diamond, and is the most expensive bra in existence to date, according to the Guinness Book of World Records website.

But despite the heavy price tags attached to the fantasy bras, diamond prices are currently facing downward pressure on the back of China's economic showdown, a September report by Rapaport, a source of diamond price and market information, found.

Rapaport operates the RapNet Diamond Index, a snapshot of average asking prices for diamonds within a network of companies in the diamond industry. The index for 1-carat laboratory-graded diamonds fell 3.7 percent between January and August.

Mouawad's Nasr said, however, that supply and demand was still the key dictator of price.

"Recently, [prices for] certain sizes of round diamonds are lower than what it used to be two to three months ago," he said. Round diamonds generally command higher prices.

But Nasr added that there was growing demand for other shapes and sizes of diamonds, combined with different levels of clarity. Diamonds are given clarity grades according to the number of flaws they have, ranging from F (flawless) to I (flaws that are visible to the human eye).

"If you buy, for example, a D-colored diamond with an SI clarity [or a] top color [with] lower clarity, we are witnessing a greater demand for that because people would still like a very big diamond at more affordable prices," said Nasr.