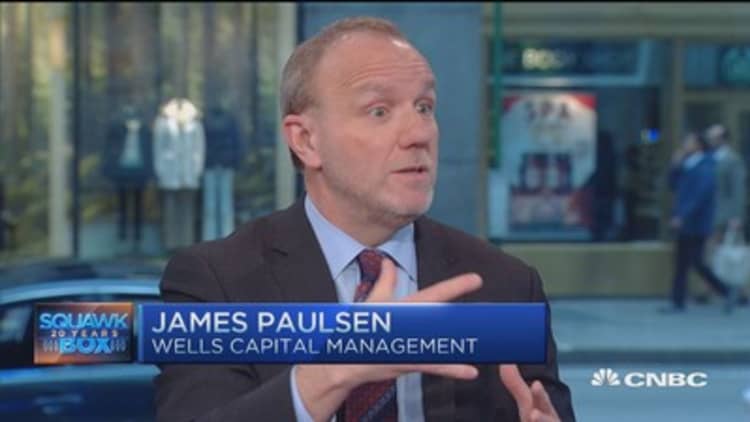 With few of the traditional indicators pointing to a recession, this could be just the time investors should start preparing for ... a recession.

Under ordinary circumstances, factors such as liquidity, the yield curve, gross domestic product growth, and fiscal and monetary stimulus would be key indicators to suggest the direction in which the economy is heading.

However, these are not ordinary times, and Jim Paulsen, chief investment strategist at Wells Capital Management, is warning clients that the chances of an economic shock are growing:

Policy officials, economists and investors have become conditioned by the post-war experience that recessions simply don't happen until economic policies turn restrictive Not before interest rates rise, the yield curve inverts and not until the Federal Reserve drains the punch bowl and the money supply slows.

However, the predictive relationships between traditional economic policies and future economic growth have weakened considerably in recent years raising the risk of an "unexpected recession."

No one seems to understand what is driving economic growth ... or what may end this recovery.
Jim Paulsen
chief investment strategist, Wells Capital Management

Indeed, the indicators would suggest that while the U.S. is not growing at anything near a robust pace, the threat of a recession seems at least diminished.

GDP continues to hold in, with the full-year growth rate likely to be in the low 2 percent range. M-2, which is a measure the Federal Reserve uses to gauge the flow of money, is increasing at a 7.4 percent quarterly pace and 6.2 percent annualized.

The yield curve, or the difference between government debt yields of different maturities, remains expansionary. Both fiscal policy, thanks to government deficit spending, and monetary policy, with zero interest rates, are accommodative by historical standards.

Yet, Paulsen points out, some traditional relationships have broken down.

With inflation at least comparatively muted since the late 1970s and early 1980s, the direct correlation between the stock market and bond yields as well as high levels of fiscal and monetary accommodation with nominal GDP growth have come apart. The Fed, for instance, has injected $4.5 trillion through its quantitative easing program, but it has yet to get anything more than below-trend growth and the worst recovery since the Great Depression.

In essence, there's no assurance that a rising stock market, cheap money and huge levels of national debt will pave the way for future growth.

Most of the gauges used during the post-war era to weigh recession risk have lost their predictive abilities in recent years. Should anyone feel confident in low recession risk today because money supply growth is strong, the yield curve is positively sloped, yields are low and fiscal deficit spending is still positive?

...Indeed, based on the correlation coefficients since 1997, the rapid pace of money growth and the decline in bond yields during the last year should increase concerns about a potential recession.

Paulsen said he is not forecasting a recession, but does believe the risk is rising and investors should begin adjusting their portfolios toward slower growth. He points out that the recovery is in its seventh year, earnings growth is slowing and market valuations are "high."

Plus, the economy is about to enter uncharted waters, with the Federal Reserve preparing to raise interest rates after keeping its target funds rate near zero for the past seven years.

This recovery has been unique in the post-war experience. No one seems to understand what is driving economic growth (and why, for example, massive economic policy stimulus has not quickened the pace of economic growth) or what may end this recovery.

This recovery has been chronically surprising, inexplicable and disappointing. Would it be shocking if it ended abruptly and without conventional warning?