The week ahead starts with Asian traders digesting the below-view trade figures from China released at the weekend.

October exports fell 6.9 percent from a year ago, dropping for a fourth month, while imports slipped 18.8 percent, leaving the country with a record high trade surplus of $61.64 billion, the General Administration of Customs said on Sunday.

Although Beijing has already repeatedly cut interest rates and softened the exchange rate to prop up the economy, the latest trade numbers suggest that a stubborn slowdown persists in the world's second-largest economy.

"It's a big week for China and these numbers might set the tone for the likes of industrial production due on Wednesday, along with October retail sales and fixed assets investment. Again, little to no change is predicted for these three key monthly economic activity indicators. Also due this week is China's consumer and producer prices, scheduled for Tuesday," analysts from National Australia Bank wrote in a report issued on November 6.

China's consumer price index (CPI) for October is expected to rise 1.5 percent from a year earlier, a Reuters poll showed, slightly lower than September's 1.6 percent gain. The producer price index (PPI) is likely to have clocked its 44th straight month of declines, with the PPI falling 5.8 percent, following a 5.9 percent fall in the previous month.

Meanwhile, the slew of monthly indicators due on Wednesday will add to doubts about Beijing reaching its current full-year growth target of about 7 percent. State-controlled media outlet Xinhua reported last week that President Xi Jinping had said that China would aim for growth of no less than 6.5 percent over the next five years.

Fixed-asset investment in non-rural areas of China is estimated to increase 10.2 percent in the January-October period compared with the year-earlier period, the survey by Reuters indicated, slightly below the 10.3 percent gain recorded in the January-September period. 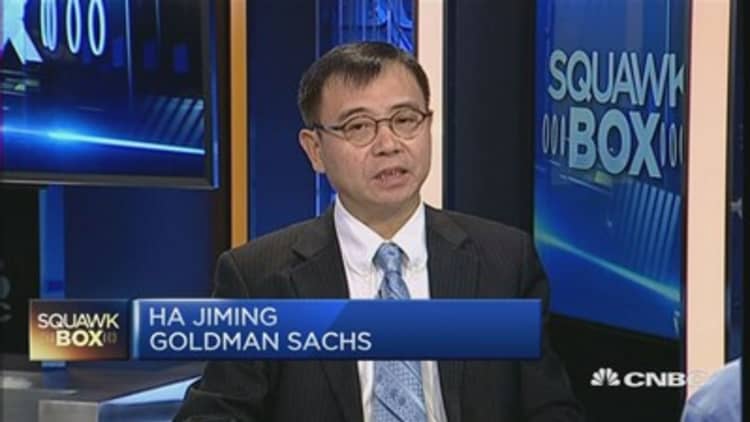 Japan's machinery orders, due on Thursday, may rebound in September. Economists polled by Reuters expect the leading indicator of capital expenditure to increase 3.3 percent, after slumping 5.7 percent in August.

A rise in machinery orders suggests strong business appetite for investment and will in turn allay fears surrounding the Bank of Japan's (BOJ) economic optimism. However, monthly machinery orders are known to be highly volatile, even though the core number excludes big orders from the electricity and shipping sectors that have a disproportionate impact on the data.

Policymakers in South Korea convene their monthly policy meeting on Thursday and analysts at Barclays expect the central bank to refrain from further policy easing in the final quarter of 2015.

"Due to the growing likelihood of a U.S. rate hike in December amid a stronger post-MERS revival in the Korean services economy, the Bank of Korea (BOK) is likely to refrain from providing more accommodation in the fourth quarter," a note dated November 3 said. " We delay our forecast for a 25-basis-point policy rate cut to first quarter of 2016, during the run-up to the National Assembly elections in April."

The BOK kept its policy interest rate at a record-low 1.50 percent in October, marking the fourth straight month it had left its base rate unchanged, as it assesses the country's recovery from a deadly outbreak of a viral respiratory in May.

Data following the policy decision showed South Korea's economic growth accelerated to its fastest in more than five years on the back of a sharp recovery in domestic demand. Gross domestic product (GDP) grew by a seasonally adjusted 1.2 percent over the third quarter, central bank's estimates showed on October 23.

Malaysia's economy likely slowed further in the July-September quarter, as exports showed no signs of recovery amid a slower-growing China and weak commodity prices, according to an November 6 report by Moody's Analytics.

Meanwhile, the implementation of a goods and services tax (GST) in April continue to weigh on domestic consumption and the country's political scandal involving Prime Minister Najib Razak could have dampened investment spending during the quarter, analysts added. Prime Minister Razak has been facing questions over his alleged role in a graft scandal at state investment fund 1Malaysia Development Bhd (1MDB).

Economic growth for the July-September period likely ticked up just 0.1 percent on-quarter, the report from Moody's Analytics said, down from a seasonally adjusted 0.4 percent in the three months to June. On a year-on-year basis, Hong Kong's economy is expected to grow 2 percent, compared with 2.8 percent in the second quarter.

— Reuters contributed to this report