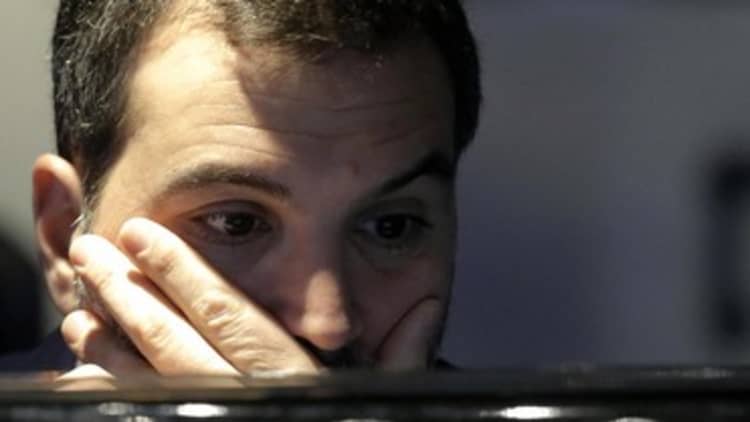 "We reached exhaustion at the very same time we recaptured 1,820 (on the ). At 1:20, you saw some some exhaustion of sellers and you got an intraday bounce. The buying showed up in the Russell and the momentum names," said Art Hogan, market strategist at Wunderlich Securities.

The Russell 2000, which has been in bear market territory, was the first major U.S. index to turn positive, followed by the Nasdaq, temporarily positive, as buyers nibbled on tech and biotech. The iShares Nasdaq Biotech ETF was up 3.5 percent.

The Dow was down about 200 points in late trading, but well off its lows of the day, and the S&P 500 was also lower.

"It's intraday volatility for sure, but it's a good sign. Today felt as close to capitulation as you can get," said Hogan. "To have it reverse itself, it's very strong sign technically."

The S&P 500 fell through the key 1,867 level for a third day, its 2015 low. But the technical damage accelerated when it slid below 1,820, its 2014 low. Traders have been watching that level, and technicians see it as a key support point that would give way to a drop into the 1,700s if broken.

The S&P recovered more than 50 points and was at 1,870, 11 points off Tuesday's close in the final hour of trading.

Earlier stocks were reeling, with investors running for safety, amid growing concern that market fears about a global recession could become self-fulfilling.

"That's definitely the market psychology, much in the way last August (a sell-off) turned out to be really a holding pattern while people were waiting for the Fed to tell them how the economy was," said Don Townswick, director of equities at Conning.

Selling snowballed in global equities markets Wednesday as oil prices plunged. West Texas Intermediate futures for February settled at $26.55, the lowest since May 2003. The expiration of the February futures contract added to volatility.

"It feels like a panic here. It's accelerated to the downside," said Chris Rupkey, chief financial economist at MUFG Union Bank. "It should be like we're getting close to discounting this darker world outlook. ... It's not severe enough yet to cause consumers to question their purchases or will they start to postpone big-ticket items like homes and cars. It's not there yet but it's got to stop pretty quickly here or it will affect confidence."

The Dow was down more than 550 points at its lows, while stocks in Europe, Asia and emerging markets were also crushed. The U.K. FTSE closed down 3.5 percent, and the German DAX lost 2.8 percent. The Japanese Nikkei dropped 3.7 percent, falling into bear market territory — now a correction of 20 percent or more.

Townswick said weakness is now spreading beyond the oil companies, to the holders of oil bonds. "It's not just going to be oil companies at these levels. I think the contagion is going to be a bigger deal than oil."

He said the market selling Wednesday was a panic and that it was overdone. "I think that barring some type of Long-Term Capital Management explosion or something like that, it's way overdone and even with that it's probably still a little more panicky than it should be," Townswick said. He said the market could sell off as much as 20 percent but he expects a V shaped bounce back.

The dollar firmed Wednesday and some emerging market currencies were clobbered, with the Mexican peso down as much as 1.4 percent and the Russian ruble falling nearly 4 percent to a new low.

In the credit market, spreads had continued to widen particularly for high-yield debt, while investors turned to the Treasury market for solace. Buying in the 10-year drove yields as low as 1.97 percent, and the Fed-sensitive two-year yield fell to 0.81 percent. Yields came off their lows slightly as stocks rallied.

One of the first parts of the market to start showing cracks was the high-yield debt market, where the bonds of energy companies have been pounded but also dragged the entire market down with it.

High-yield debt was yielding about 9.5 percent, and spreads on the Barclays broad high-yield index was 753.

According to Citigroup, the spread to Treasurys on low-rated CCC high-yield debt was 1655, well above the highest-rated BB high yield at 610. Citigroup says high-yield spreads, excluding energy, are at 721.