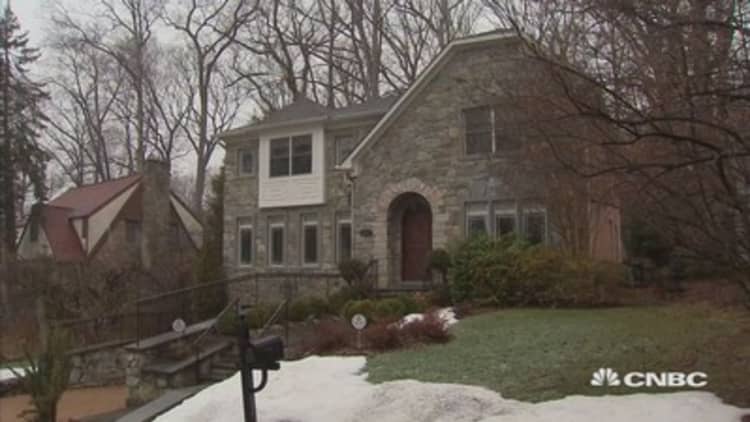 On a snowy Tuesday in early February, Jessie and Mark Sciulli toured a home in the northern suburbs of Washington, D.C., that wasn't listed for sale yet. Relocating their family back home from overseas, the couple was in town for just two days and had to see as much as possible. Their agent didn't have enough active listings to show, so she went after homes she knew were coming soon.

It is the same story for home buyers nationwide: There is precious, record little for sale.

"I feel like there is not a lot of inventory right now, so that does make us a little bit nervous, because we think there is going to be a lot more offered in two or three weeks, so I'd say for sure we feel that stress," said Jessie.

Presidents Day weekend is traditionally seen by real estate agents and homebuilders as the start of the spring housing market — the busiest time of year for home sales. The number of listings always rises, and it will this year as well, but inventory is already so low to begin with that even the new listings will not be nearly enough.

"I think inventory is going to remain tight. The closer you are to urban centers, the tighter the inventory, because the demand is strong, and a lot of that stuff gets scooped up before it hits the market," said Jane Fairweather, a real estate agent in Bethesda, Maryland.

The latest numbers paint an empty picture. Inventory at the end of December nationally was down nearly 4 percent from the previous December, but sales were up nearly 8 percent, according to the National Association of Realtors. The supply of homes for sale was the lowest since the start of 2005, and back then there were far more homes being built to add to overall supply. As for January, the NAR's listing site, Realtor.com, reported that listings were down a sharper 4.4 percent from a year ago.

In local markets, the January readings are coming in even tighter. Total listings in Charlotte, North Carolina, dropped nearly 24 percent in January from a year ago, with the number of new listings down 6 percent. In Denver, more than 4,000 homes came onto the market in January, but total inventory remained at historically low levels. Buyers scooped up more than came on.

January inventory was down nearly 17 percent in Philadelphia from a year ago, and Washington, D.C., had so few listings it would take less than two months at the current sales pace to exhaust supply. A healthy housing market traditionally has four to six months' worth of inventory for sale.

"Half the [D.C.] homes sold in January were on the market for 26 days, and the competition among buyers pushed the average percent of asking price received at sale up to 98.6 percent," according to the Greater Capital Area Association of Realtors. "The $504,250 median price for the month was slightly higher than last year (1.9 percent) and marked the highest January level on record for the District."

"The inventory question is a puzzle," said Chris Herbert, managing director of Harvard's Joint Center for Housing Studies. "If you drill down and say, what's happening at the lower end of the market, what's happening in more affordable neighborhoods, those places had a much more dramatic boom-bust in house prices. Even though prices have come back there pretty strongly, they are much more likely to be underwater or low equity, so I think part of it is even though we think we have seen the market heal, there's still a lot of healing left to do."

Herbert also points to younger baby boomers, who lost home equity and more in the recession, and who are not trading up as much as their age group historically does. They are staying put in their homes, not adding to much-needed inventory. Add it up and it comes out to less — less inventory, which in turn puts upward pressure on prices.

Sellers, however, appear to be seeing a limit. They are not pricing their homes as aggressively as they did last fall, according to real estate brokerage Redfin. While homes are selling fast, not everything sells, especially if it's overpriced. Sellers know the only thing worse than not getting top dollar is sitting on the market and becoming a "stale" listing.

"Even with surging home prices, listings were still down in January from a year ago," said Redfin chief economist Nela Richardson. "Sellers are worried that today's buyers won't pay enough for their current home to finance their next-level house."

Back in suburban D.C., after an exhausting two days and 19 home tours, the Sciullis left without making any offers.

'Stale' homes are tightening up the housing market

Several of the homes they saw were not listed yet, including their top choice. That home will go on sale soon, but at a price the Sciullis think may be a little high for the market.

"We just have to make sure we're getting it at a price point that we're comfortable with and that we can manage," said Mark.

The Sciullis are going to wait and see if it gets any other offers; if not, they'll jump on it fast.