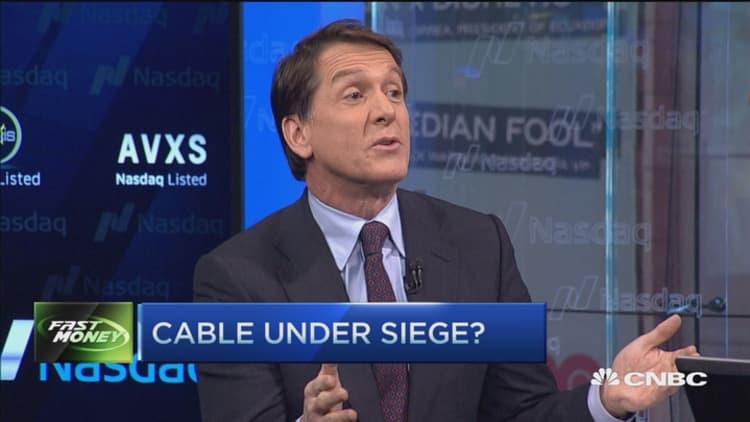 With a vote to free cable boxes from the stranglehold of cable providers, FCC chairman Tom Wheeler may have triggered a battle royale between media companies of all stripes.

In Washington this week, the FCC voted 3-2 to move forward with efforts to open up the cable box-top market in order for streaming services like Netflix or Amazon to offer alternative technology. In other words, consumers can conceivably channel surf between cable news and House of Cards—all through a third party device that prevents them from being locked into a service provided by a cable company.

The FCC will now allow the public to comment on the situation before proceeding with a formal vote later this year. If the decision is upheld, observers say the brave new world could herald a big shift for the American media landscape.

Right now, "the titans, being the programmers and the distributors, control a closed echo-system. Digital companies want in on that as it is an enormous opportunity for them. Methuselah Advisors Managing Partner John Chachas told CNBC's "Fast Money" last week. Internet giants like Google also covet access to a cable ecosystem "that now remains largely closed," he added. That may be changing, and cable providers aren't the only ones at risk, Chachas added.

The vote is likely to be met with strong resistance from companies currently operating in the closed sphere of cable set-top box technology, he said. "The people that have already flocked to oppose this rule-making include 21st Century Fox, ABC, CBS and The Motion Picture Association of America."

"I suspect cable guys would prove to be masterful at throwing up technical roadblocks to someone penetrating their cable boxes or their consumer relationship," said Crockett, whose coverage includes Netflix and Disney. He added that politics may also play a role in the outcome, noting that a potential Republican victory in the 2016 presidential election could mean the FCC's move "might not survive the next administration."

Explaining the agency's rationale, The FCC's Wheeler has stated the cost of leasing set-top boxes are too high, and that new competition could help address rising costs. Currently, set-top box development has been led by cable providers like Comcast, Charter and Time Warner Cable. The vote could enable Apple and Google to develop alternatives to the boxes, and possibly incorporate its technology into already existing equipment, analysts say. Currently, 99 percent of U.S. cable customers rent boxes from cable companies.

According to the FCC, the average yearly cost for U.S. household to rent cable boxes is around $231. In total, U.S. consumers spent $20 billion a year on cable box leases.

Disclosure: Comcast is the owner of NBCUniversal, the parent company of CNBC and CNBC.com.