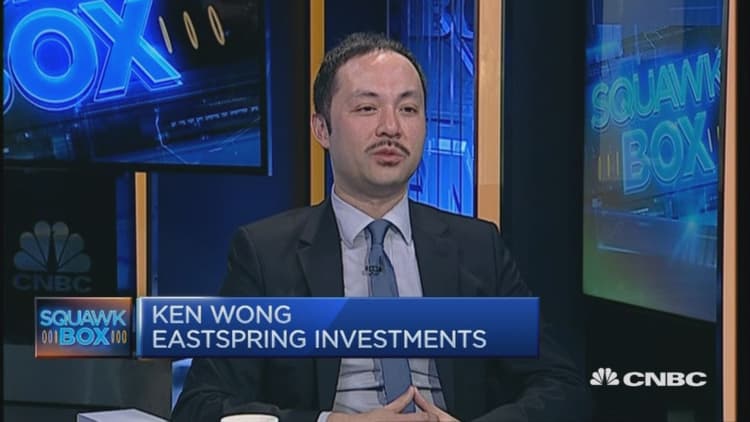 The news out of China, bad or good, just doesn't seem to have as much bite anymore.

Sure, downbeat Chinese economic data on the first day of trading in 2016 ignited a global market sell-off. But as the year has worn on, the impact is diminishing.

Similarly, news to start the week that China's central bank was cutting reserve requirements failed to generate a rally, as monetary easing otherwise might.

So is the U.S. starting to decouple from China? Are investors less concerned about China's slowdown?

The answer is complex.

An employee works on an engine at the assembly line of a car factory in Qingdao, China.
STR | AFP | Getty Images

Market pros care immensely about China's economy but less about the moves in the , which is seen as erratic and volatile and more about the country's management of its currency.

Indeed, near-term stability in the Chinese currency and improved communication from the central bank has allowed U.S. investors to worry less about the China story.

The recent communication from the People's Bank of China seems to have assuaged fears of a yuan devaluation. At the G-20 meeting in Shanghai, PBOC Gov. Zhou Xiaochuan tried to instill confidence among fellow policymakers and world leaders that China would not embark on another currency devaluation to support its economy.

Those comments got the nod of U.S. Treasury Secretary Jack Lew who post-G-20 said that the risk of a devaluation has been "greatly, greatly reduced."

"Markets are willing to look on the bright side and give authorities the benefit," said Richard Kelly, head of global securities at TD Securities.

That's an important attitude switch, given the impact previous Chinese actions have had on U.S. markets, with the fall in China's markets in the second half of 2015 sending the U.S. into a tailspin.

Data from Kensho reveal that on days when Chinese stocks fell 4 percent or more in 2015, the on average lost 1 percent in the following trading session as a big move in the Shanghai composite would spark fear among traders in the U.S.

However this year, wild swings in the Chinese equity market haven't warranted the same outsized reaction in U.S. stocks. In fact, while Chinese stocks have remained just as volatile in 2016, the response in U.S. equities has been less pronounced — averaging a 0.6 percent drop.

Experts say it's a combination of markets becoming immune to weak Chinese data and bad news being seen as good news for stocks.

"Soft economic data out of China increases the likelihood of further stimulus from the Chinese central bank," said Sameer Samana, global quantitative strategist at Wells Fargo. "It may actually lead the Federal Reserve to be on hold this year as well."

In the past, Fed Chair Janet Yellen has referenced China and international developments as headwinds for the U.S. economy.

"The risk of stronger Fed hikes have diminished and the PBOC is doing all it can to prevent a stronger collapse in markets," said Simon Quijano-Evans, Commerzbank's head of emerging markets research.

The question is whether this will last. A growing number of economists in Beijing say the effectiveness of China's monetary policy will continue to be questioned if the country's economic data do not start to improve. A lack of evidence of China's economy turning around by the end of this year could result in investors losing faith in China's central bank and its monetary tools.

A number of skeptics are already questioning the credibility of European and Japanese policymakers as both places deal with tepid economic growth despite the aggressive measures (including negative interest rates) being used by their central banks.

Absence of a rebound in China's economy will likely fuel currency devaluation concerns.

At some point China may have to allow its currency to gradually depreciate, according to NSBO Bank. Wall street currency analysts on average are betting on a 7 percent drop in the yuan from current levels by year-end.

"Not a one-off devaluation like the one in August. More of a slow, measured, weakening," NSBO's Chinese research analyst Duncan Wrigley said of a possible devaluation scenario

In the meantime, China watchers will look to the the National People's Congress meeting this weekend where high-ranking officials will discuss Chinese laws, regulations and policies.

NSBO's head of research, Oliver Barron, said markets have been looking for changes to China's securities laws regarding the initial public offering regulation process. Any shift will have to get the approval of the NPC. The congress will also approve China's five-year plan for 2016-2020.

Disclosure: NBCUniversal, parent of CNBC, is a minority investor in Kensho.